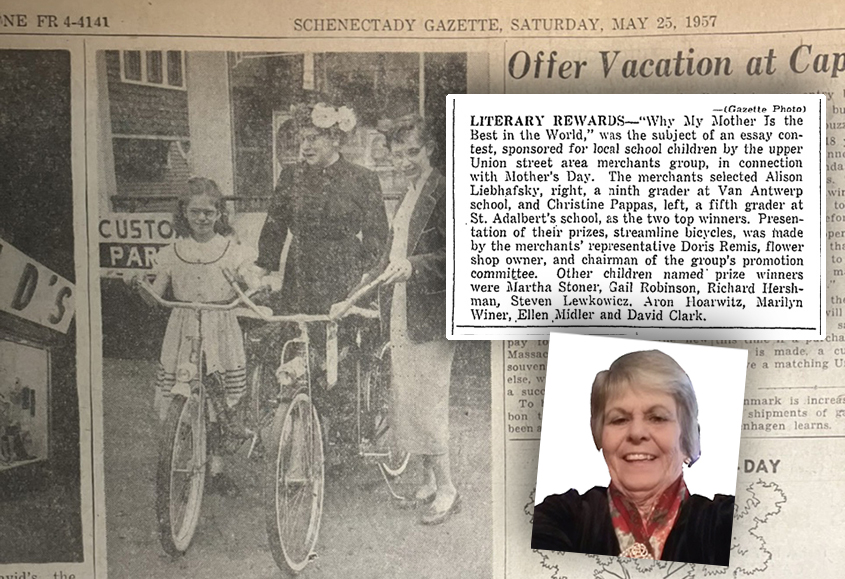 Every once in a while, out of the blue, we receive a request from someone looking for an article or photo that appeared in The Daily Gazette many years ago.

While we try to fulfill as many requests as possible – some successfully and some not – there are a few that stand out because of the story behind them.

This was the case when Christine Pappas Fuller contacted us by e-mail recently.

Fuller, now 76, lives in San Antonio, Texas. She grew up in Schenectady.

When she was around 10, she won a Mother’s Day essay contest and the top prize in two age categories was a new Streamline bike. Her photo appeared in The Schenectady Gazette – as it was then called – but she had lost the newspaper clipping for the photo.

She had told her daughter and her grandchildren about it, but had no proof, nothing to show them.

What makes Fuller’s claim so special is that she was a young girl who was raised in a number of foster homes from infancy until she was 18. The contest asked children to write an essay titled “Why my mom is the best in the world.”

Fuller never knew his biological mother. Instead, she wrote an essay about what she imagined the perfect mother to be. The mother she would have liked to have had.

The contest judges did not know. They simply judged that young Christine’s dissertation was the best in her age group, the most sincere, the most appropriate for Mother’s Day.

When she contacted us, Fuller only had a rough idea of ​​when the photo appeared.

“Between the years 1955 and 1960 I entered a contest I believe through your journal for Mother’s Day,” she wrote in her email, then provided the details. . “It was one of the few happy memories I have. [of growing up].”

There are a few leads. At the Daily Gazette, there are bound volumes of print editions that date back several decades. But it would take hours upon hours to wade through years of actual pages to find a picture of a girl standing with a bicycle.

Another avenue is microfilm. Same problem. Many hours would be involved.

The last option is to use an electronic database which is very reliable for searches from the past 30 or so years, but can be hit or miss – mostly misses – for much older searches.

In this case, we were lucky. It was May 25, 1957. The photo and the caption of the photo with Christine Pappas.

It was almost exactly 65 years ago.

The digital image was a bit grainy, so we went through the bound volumes of actual printed newspapers and found the photo in its original state, which was crisper.

We made a copy and sent it to him.

“You have no idea what it meant to me to get that picture,” Fuller said in surprise when she called several days later. “My granddaughter was really excited because I had been telling them about it for years and had nothing to show them. I had no hope.

“My daughter made me go through so many pictures over and over to make sure I didn’t have it. It was then that we had the idea of ​​contacting someone from your newspaper.

Fuller told us about his life:

Growing up, she got to know her father. He was a chef at Schenectady, but Fuller said he was unable to care for her due to the hours he worked.

He had custody, but she lived with adoptive parents and her father helped them financially. She said her father was of Greek descent and emigrated to the United States from Istanbul, Turkey.

“My dad lived on College Street, and the reason I know this area so much is because he never had a car and we always walked where we needed to go,” she said.

His memories of downtown Schenectady?

“I remember Christmas lights hanging in the street when I was a kid, I remember how stores decorated their windows – like the Carl company.”

At the time she won the bike, Fuller says she was living with adoptive parents on Stanley Street near McClyman Street.

She remembers the big day:

“I still remember the dress I wore. It was turquoise, it had rickrack [the braided trim] it spins around. She was black and the dress was turquoise. To this day, I love all things turquoise; it’s my favorite color.

“I just remember them giving me a thumbs up and then I remember getting the bike and being able to ride it around the block.”

She couldn’t remember all the schools she went to in Schenectady; she was attending St. Adalbert School at the time of the essay contest. Later, she will attend Scotia-Glenville High School.

Her husband worked for the Big N chain of stores and traveled extensively, opening stores in other cities. They eventually moved to a town called Jersey Shore near Williamsport, Pennsylvania, where her children went to school and where she spent most of her adult life.

The marriage ended when the children “were still in grade school” and her husband moved to New Mexico. Fuller remained in Pennsylvania.

Years later, an unexpected change was about to occur.

“I was working at Pep Boys as an assistant manager at Williamsport when my daughter called. She said she wanted me to leave all my problems and sadness in Pennsylvania and move to San Antonio where she was.

In 2000, Fuller moved to San Antonio, transferred to a Pep Boys store there, and later got into the insurance business.

She is now close to her daughter, her son-in-law and their two teenage children. His daughter has a master’s degree and also works in insurance.

“I’ve never been happier than I’ve been in the last 22 years since I’ve been here with my daughter,” Fuller said.

Although children’s experiences in foster care vary widely, Fuller can only tell her story.

She says she remembers the “last four” foster homes she was in, and the last one, when she was a teenager, was very strict.

“The one thing I’ve always known, after growing up like I did,” Fuller said, “is that I never wanted to turn my back on my kids or embarrass them. Even though I I made mistakes, I always wanted to make them proud. That’s what I remembered about living in host families.

And as she saw her dad, she said they didn’t have a very good relationship. (She didn’t look for her biological mother until several years later, and at that point she found out her mother had died.)

While in foster care, Fuller said, “[the parents] did not push other activities. I was never allowed to play a musical instrument or be in a club.

“My daughter has learned from my past. Her children take music lessons, dance lessons.

“She’s a wonderful mother; she is everything I would have wanted for myself.

Looking back, wasn’t that something a young girl from Schenectady wrote so longingly about in 1957?

More from The Daily Gazette: