A cow gets its head stuck in a bicycle frame 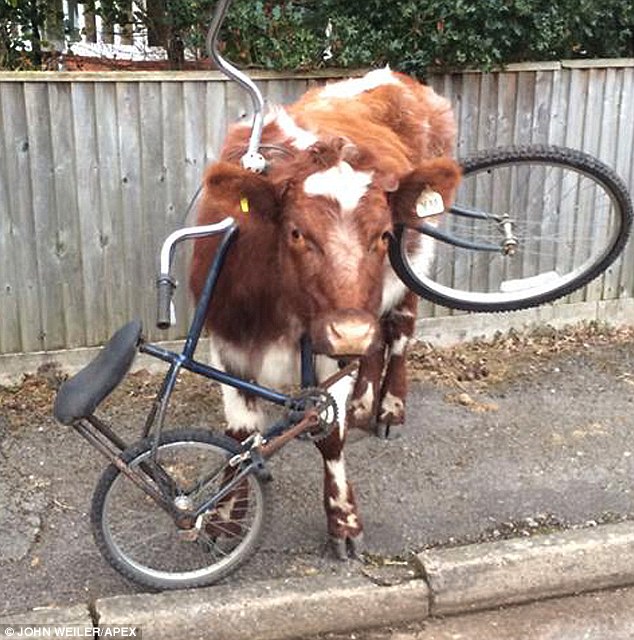 A cow gets its head stuck in a bicycle frame

Moo-ve long, nothing to see here (except the cow that sort of got its head stuck in a bike)

By Ollie Gillman For MailOnline

These bizarre images show the moment a cow sort of got its head stuck in the frame of a bicycle.

While the brown-and-white cow didn’t appear to be bothered by the bicycle hanging from its neck, another cow in the herd can be seen with a puzzled look in the background.

Engineer John Weiler stumbled upon this eerie sight as he was driving through Brockenhurst, New Forest, Hampshire, on his way to work this morning.

Weird: Cow was seen wandering through village with its head trapped between a bicycle frame

Mr. Weiler, from Lymington in the New Forest, got out of his car to see if the cow was okay.

He said, “It’s not something you see every day.

“I was driving through Brockenhurst and noticed the cow on the side of the road, so I pulled over and got out of my car.

“She was staying pretty calm, I tried to approach her but she backed up a bit.

“She was with a moving herd. It is not uncommon to see cattle moving through the streets like this, but it is unusual to see a bicycle around a cow’s neck.

Mr Weiler, 51, added he called New Forest Agisters – the local pony and cattle breeding company – before a police officer arrived after taking a call from an area resident . 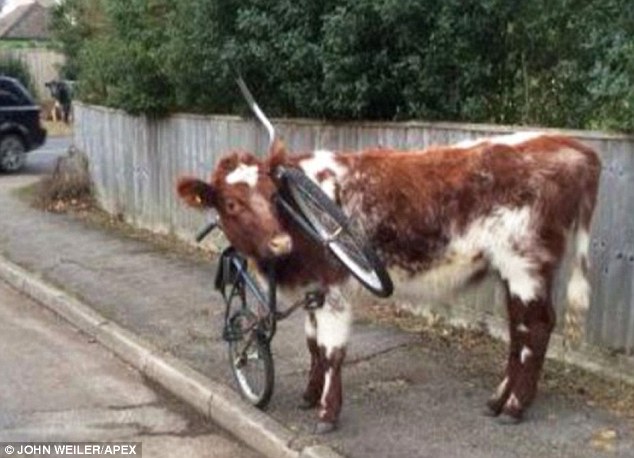 “We were all there thinking about what we were going to do and then she released him,” Mr. Weiler said.

“Someone must have left the bike in front of their house and I guess she must have stuck her head in the middle and then got stuck.”

The policeman quickly checked that the cow was not injured before letting her join his herd as they passed through the rural village.