A mechanical engineering student designs and builds an electric bicycle 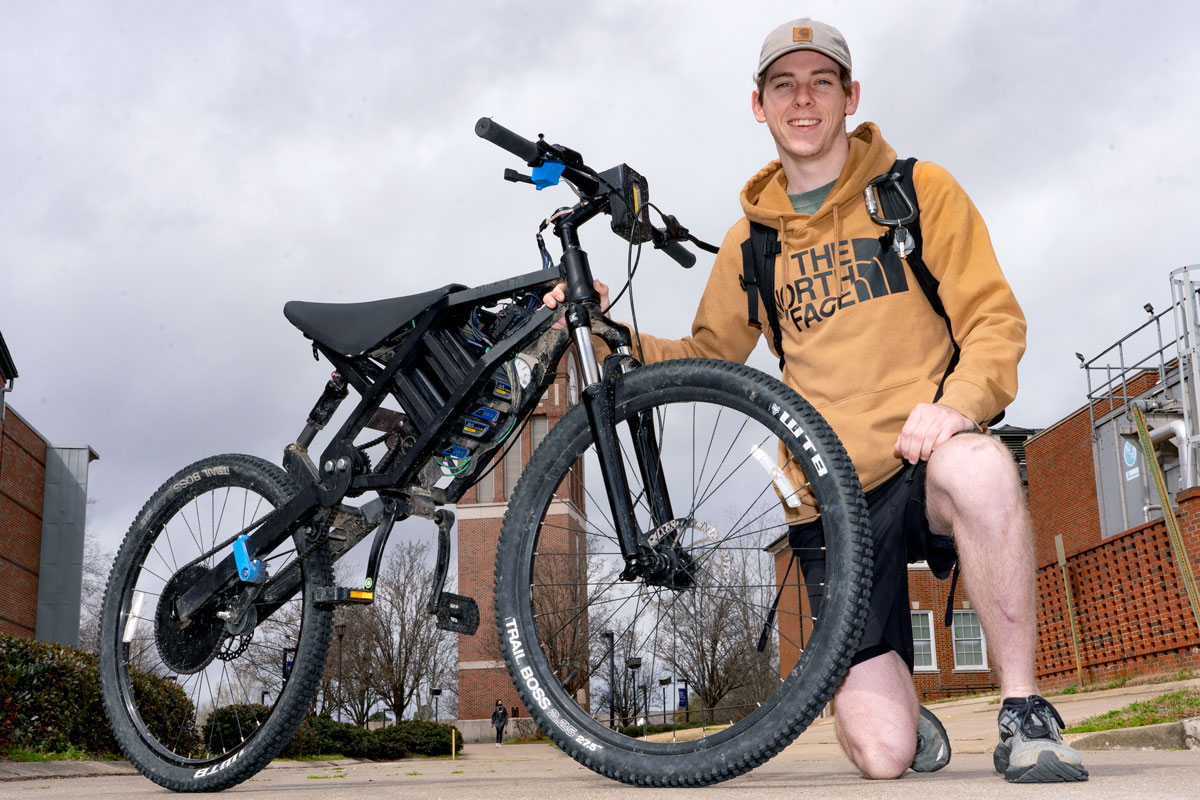 A mechanical engineering student designs and builds an electric bicycle

While some people took on the early challenges of the COVID-19 pandemic by taking advantage of Netflix specials or catching up on sleep, Ben Grice, a mechanical engineering junior from Louisiana Tech University, used his free time to design and build an electric mountain bike.

When the pandemic hit last spring, Grice was determined to create something in the time he would otherwise have spent participating in group activities. He used the outbreak of the virus and the limits it placed on his ability to get together with classmates, friends and family as an opportunity to learn a new skill: welding. By summer, his determination to master welding had led Grice to design and build a battery-powered bicycle.

“I wanted to learn something new, and the best way for me to do that was to build something,” he said of the project. “When I started welding, I knew I wanted to weld different sized parts for a project, and within months that project turned into an electric bike.”

Ben’s father, Randy, says his son’s desire to own a dirt bike played a part in his determination to build the e-bike.

“Ben has enjoyed building and experimenting since he was young,” he said. “The idea for his e-bike came about because he wanted a motorbike. His mum and I said ‘no’ to him, and he decided to build one and make it electric instead. We’re proud his courage and determination to take an idea and turn it into something he loves.

The 21-year-old mechanical engineer has applied his lifelong love for taking things apart and rebuilding things to multiple projects, including designing, building and printing a functional $150 prosthetic arm for a nine-year-old triathlete. year. As with the bike, Grice designed the prototype arm in SolidWorks, software he became familiar with at Louisiana Tech. Living with the lab 120 Series Engineering, printed parts using its 3D printer and assembled them to create a working product.

Dr. Timothy Reeves, a mechanical engineering lecturer and Grice’s mentor, says the student’s success is due to an impressive amount of perseverance and talent.

“As Ben worked on his electrified bike project over the past few months, he and I had a number of conversations about various aspects of the project, such as gears and electric motor bases. He showed remarkable perseverance in this project in two ways: first, he didn’t give up! He’s built several prototypes leading up to the current version of his design, and he’s still working on additional improvements. Second, it has been diligent in independent study of functionality, limitations, etc. of the various components. The level of commitment and motivated effort he has shown on this project is truly exceptional. Given that fact and an equally rare set of manufacturing skills, one can see why he achieved this level of success on the project.

Although the latest version of the dirt bike, now in its third prototype, is fully functional, Grice plans to improve the design even further by adding guards over the tires, a kickstand and a custom three-speed transmission. Once that project is complete, he plans to work on a modified e-bike that his girlfriend can pedal at an accelerated pace so she can follow him on rides through Ruston.