A petal peddler joins the shops of Church St. 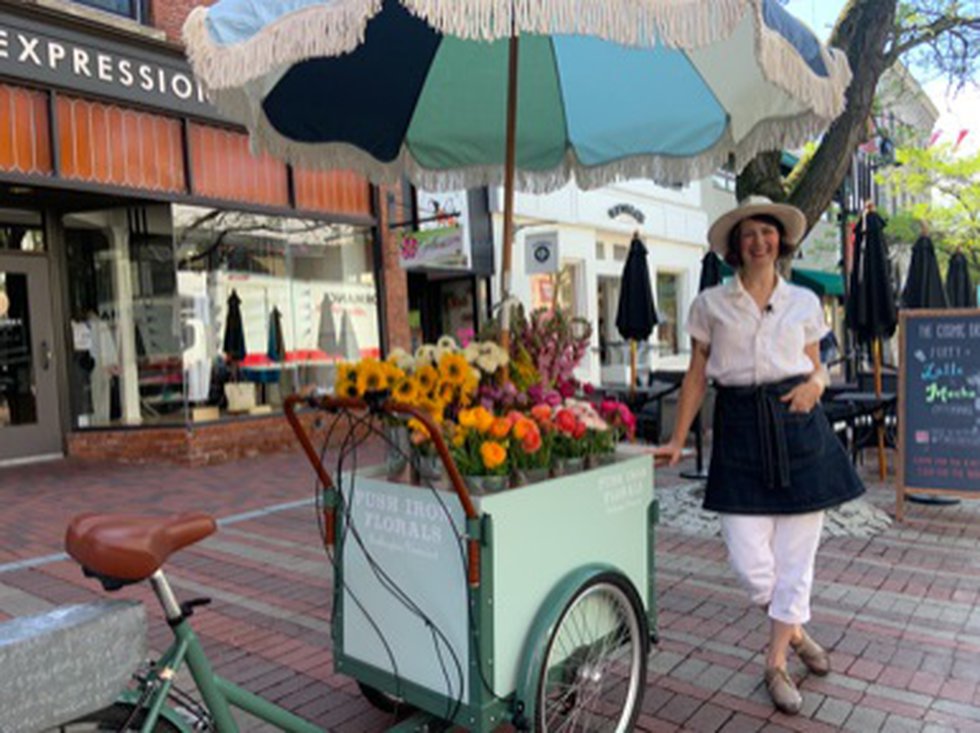 A petal peddler joins the shops of Church St.

BURLINGTON, Vermont (WCAX) – There’s a new business moving into the Church Street Market and it’s the first of its kind in Vermont.

The new bar in Burlington does not serve alcohol, but bouquets. Push Iron Florals is Vermont’s first and only bicycle bouquet bar.

Sue Eggen hails from New Orleans, where she has always admired local flower carts. “Since I was a little girl, I’ve dreamed of having my own flower basket, and here we are,” Eggen said.

As an adult, she opened a hugely successful women’s accessories store – Giant Dwarf. The entrepreneur says business is in her family DNA and it was no shock when stores like Anthropologie picked up her brand. “Worn on the red carpet, featured in magazines, sold in stores, and then I was diagnosed with stage 2 colorectal cancer, so I had to give it up,” Eggen said.

What was a dark road for a while has now turned into a great opportunity. After eight years of remission, she is chasing a dream she might not have had the chance to achieve otherwise. “Why not bring beauty to the world? It’s so needed right now,” Eggen said.

When Church Street Marketplace put out a call for new sellers a few months ago, she jumped at the chance. “It was all just a dream. It was just an illustration photoshopped together — the umbrella, the flowers, everything. And then, piece by piece, it all fell into place,” Eggen said.

Grabbing an old popsicle cart from Craigslist for $2,000, Eggen now sets up shop two days a week to sell local flowers at the stem. She starts her day at home, preparing her stems for sale, before pedaling her petal cart down the driveway. Some of the flowers are hers and others are from local growers. “I have buttercups from Understory in Bridport, VT and tulips from June Farm in the Intervale,” she said.

After three weeks in business, Eggen says she has had more success than she could have imagined, selling out every day. “It’s almost a social experiment in a way. People pass by and they don’t really know what to say at first. Then they pull out their phone and take a picture and usually walk around queuing for flowers,” she said.

And even those who don’t stop to buy a rod can’t help but take a look at his cheerful cart. “Seeing the reaction on people’s faces – the joy and happiness it brings, even if someone isn’t buying anything, it’s just passing by and seeing that. It’s an amazing feeling and I provide that,” Eggen said.

Push Iron Florals sets up shop in front of the expression shop a handful of times a week. Its hours and days depend on the weather. The best way to keep an eye on his work is on his Instagram.