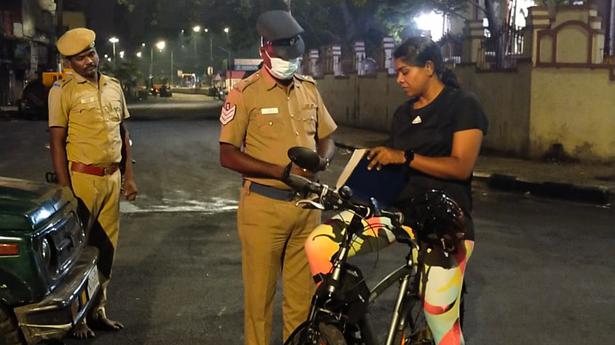 On Friday, social media was abuzz over a female IPS officer who took a bicycle and drove around to check whether patrols by police personnel in north Chennai are effective.

Dressed in a t-shirt, she took an early Friday bike ride. Her personal security accompanied her on another bike to show her the routes.

Wherever she spotted the night patrol vehicle and the team, she stopped and asked them about the situation. She noted her visit in the diary kept by the patrol team.

“The surprise nocturnal visit is not new. As a senior officer, it is difficult to get first-hand information on what is happening on the ground until we get there. Otherwise, when we move day or night in an official vehicle, it is difficult to know the situation on the ground because there is a feeling of alertness and vigilance. When we go incognito, we really get to know the real situation. It is an exercise to assess and verify the situation,” Ms Bharathi said. The Hindu.

“I wanted to see people in risk areas and whether patrol vehicles were positioned where required. It is important to be proactive. It’s encouraging for our staff when I see them on the ground instead of moving around in a vehicle. It is a strong message to the staff that I will come to see the patrol activities. Young people will be encouraged to work and provide good service to the public,” the officer said.

She said she plans to carry out such random checks once every 15 days.