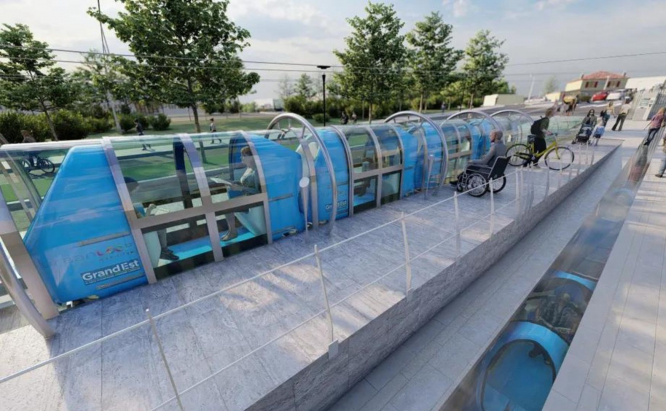 An ultra-light urban railway with small electric “nacelles” for one or two people following a system of interlocking loops around the city is to be tested at the Paris Olympics.

The Urbanloop, designed by engineers from the Lorraine INP engineering school, will take place on a 2.2 km circuit using 10 nacelles to connect the velodrome to the BMX cycle track.

Before that, the system, which already has a test track near the city of Nancy, must be cleared to carry passengers, which the team behind hopes will happen next year.

In the meantime, tests are continuing, including one held at the end of May to set a world record – a pod traveled one kilometer in one minute, using just a penny of electricity.

About a hundred students and qualified engineers worked on the project.

The prototypes have small capsules designed for one or two people, or one person and a bike.

They are built on a frame attached to two bogies, one at the front and one at the rear, which have horizontal wheels which interlock in a groove in the rails to take curves, while wheels rubber pads provide comfortable suspension.

The pods arrive at the bypass stations built on the loop, and passengers choose their destination by pressing buttons much like selecting a floor in an elevator.

The AI ​​chooses the fastest route

Sophisticated software using artificial intelligence then signals the pod to leave the station and join the main loop, ensuring safe spacing between pods and determining the fastest way to reach the destination at maximum speed 60 km/h.

The system was born out of an urban mobility project in the Grand Est region, home to 5.6 million inhabitants and five major cities, ranging from Strasbourg with 487,299 inhabitants to Metz with 322,264 inhabitants.

None of these urban hubs is dense enough to make a conventional metro system profitable, and the ground makes it difficult to build conventional trams without significant foundations.

The company explains: “To adapt to these constraints, Urbanloop’s solution consists of making the vehicles much lighter, around 200 kg per capsule, compared to 50 tonnes for a tram.

“The rail infrastructure is light and compact, requiring only 1.2m and supporting its own weight, so there is no need for foundations.

“And it can be placed in cuts, tunnels or on overpasses where there is no other space for it in the city.”

If the 2024 Olympic trial is successful, the Urbanloop team hopes the system will receive funding for full public service, likely in the city of Nancy due to its large student population.

Paris 2024 Olympics: how to get tickets and how much they will cost

The new Olympic intelligence center will coordinate security at Paris 2024