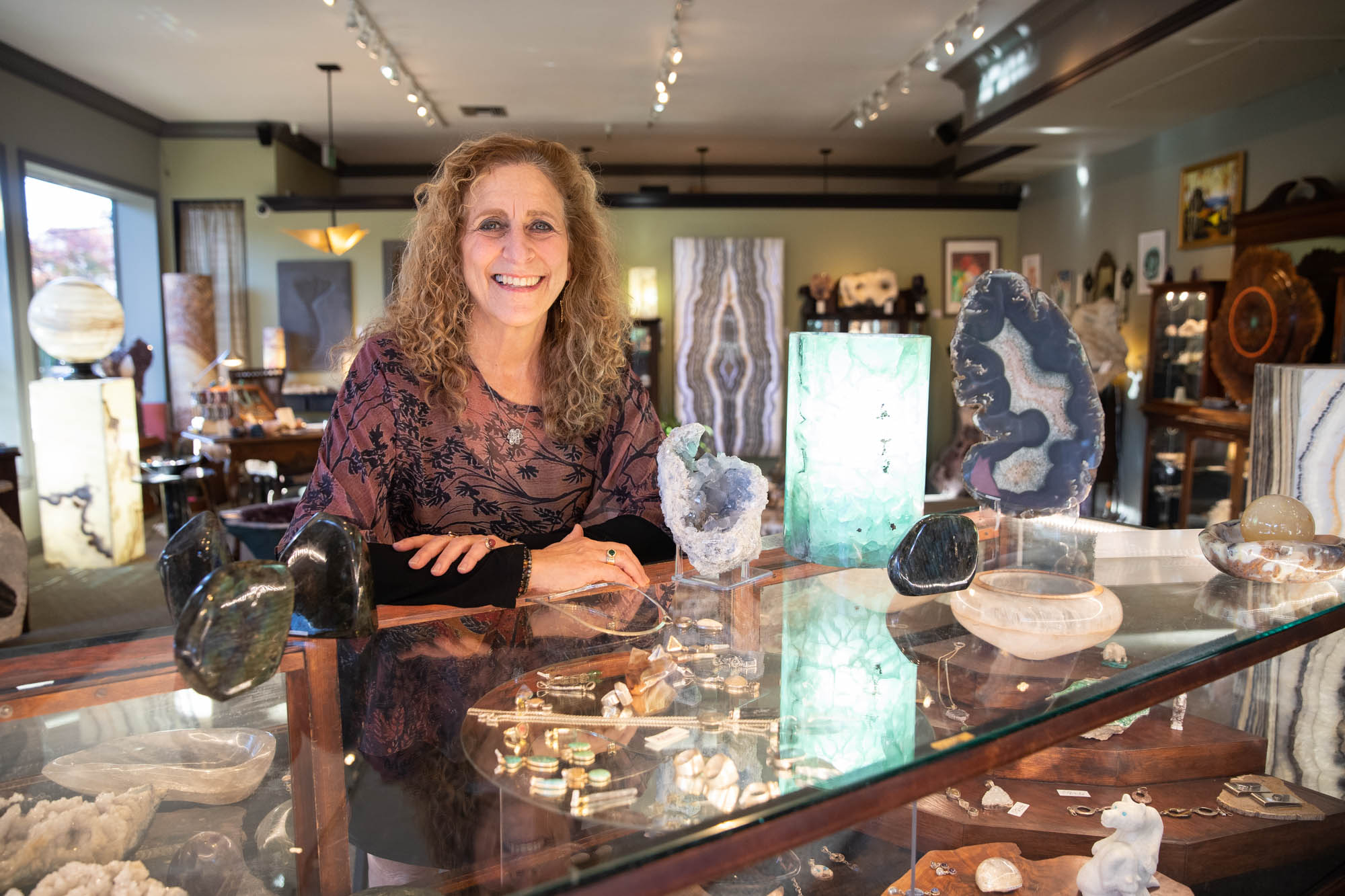 With a warm smile and a warm welcome, Nature Gallery owner Carol Garsten greeted visitors to her Los Altos store one recent afternoon, drawing attention to a curated collection of fossils, geodes and minerals that sparkled in glass cases, decorative bowls and ornate stands.

“I think there’s perfection in imperfection,” Garsten said. “The Japanese call it wabi-sabi. A geode, for example, is just a rock that looks like nothing. And then inside it’s filled with beautiful gems. So it’s a metaphor to always seek the beauty within.”

For 35 years, Garsten has shared this philosophy with his customers, selling geologically inspired sculptures, jewelry and decorative furniture. But that business will soon come to an end, as Garsten plans to retire and close his store in 296 State Street December 24th.

“It’s time to spread my wings and do something else,” Garsten said. “Thirty-five years is a long time to do a thing.”

Trained as a filmmaker at the University of Southern California, Garsten never expected to pursue a career in retail. But that changed when her mother, Norma Tager, fell ill with stage 4 ovarian cancer. To help with the stress of diagnosis, Tager developed an interest in the healing energy of crystals, using them as a form of adjunctive therapy.

Tager recovered from ovarian cancer, which Garsten attributed to experimental medical treatments. She also shared Tager’s belief that crystals played a role in the healing process.

“It was a way to find peace and calm by connecting with crystals,” Garsten said.

At Tager’s request, Garsten decided to quit the film industry and join his mother in San Luis Obispo to become a partner in her new store, Nature Gallery.

“It was like on a wing and a prayer because we really had nothing,” Garsten said, recalling that they displayed crystals on card tables when the store opened in 1987.

Garsten and Tager eventually moved to the Bay Area in 1994 to be closer to medical professionals, a move that also coincided with Silicon Valley’s dot-com era. They rented a small space in the Town & Country Village in Palo Alto, attracting high-profile clients from the tech industry. It was a heady time for Garsten but also a time of sadness, as Tager died of breast cancer in 1996.

For 17 years, Garsten ran Nature Galley from Town & Country Village, cycling to work and enjoying the close-knit vibe of the area. This however changed when new owners took over the mall. Nature Gallery didn’t fit their business model, Garsten said, so it didn’t renew its lease.

Garsten decided to move Nature Gallery to Los Altos, a place where customers could easily visit from Palo Alto and where she could retain the sense of community she had created in Town & Country Village.

“That’s the essence of what retail needs to be now, coming out of the internet economy. It’s about connecting with customers, really getting to know people,” Garsten said.

Garsten’s focus on people-to-people relationships paid off during the pandemic. Unlike many other small business owners, Garsten didn’t take out loans to stay financially solvent. Nature Gallery actually profited in 2020 and 2021. Garsten attributed its success to its pivot to online retail while maintaining a sense of human connection with customers.

Whenever possible, she personally delivered packages to customers’ homes, rang doorbells, and conversed with them from a safe distance.

“Later people came back and told me nobody was doing this,” Garsten said. “And it really seemed sincere to them that I came to visit them.”

Garsten’s email newsletters, sent to around 3,000 people, also reflect his touch of connection. Normal retail open rates are 18% to 20%, Garsten said, while his emails have open rates of 45% to 50%.

“It’s because I want to tell stories. I want to show great images, and I want to send communications and stay connected in a way that makes people happy,” Garsten said.

Although Garsten remains hopeful that someone will buy Nature Gallery and keep it open, she plans to move on regardless. Garsten, however, intends to remain fully immersed in community events in Los Altos and Palo Alto. With an eye on marketing, Garsten plans to mentor other business owners, drawing on his experiences to help them negotiate online and in-person retail connection spaces.

She nodded to two wooden chairs near her desk that were from Nature’s First Gallery in San Luis Obispo.

“When my mother passed away, she passed the torch. And now I’m ready to pass the torch to the next owner. But if it’s not meant to be, so be it. It’s time for my next chapter.”