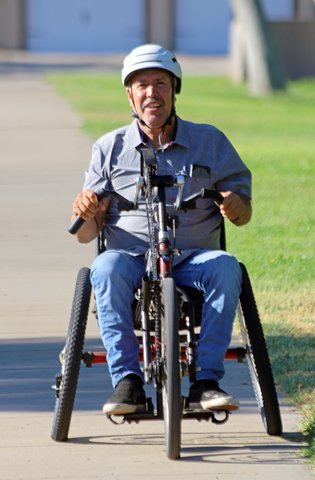 Twice a day, Jose Mota, 60, manages to drop his body – which was badly injured in a car crash 38 years ago – into the seat of a hand tricycle and rides away from his house of Lavon Avenue to cruise where he wants around Ceres.

Since his son-in-law found the bike and gave it to him about four years ago, Jose has become a neighborhood fixture, happily cruising through Berry Grove Park with his periodic sharp whistle, a bizarre habit that has sparked the finger of a finger. an irritated resident from time to time.

“I go out every day to exercise and move,” said Mota, who came to the United States from Mexico around 1970. Sometimes he rides to the doctor’s office in town or to go shopping on Hatch Road. Sometimes it takes the Hatch Road cycle path up Mitchell Road to the Chevron station on Service Road. Occasionally, as he attempts to drive into a store to pick up a half gallon of milk or juice, he is directed by a store employee who informs him that he cannot bring his vehicle in so common in the store. He explained to a saleswoman that it was not his first time inside her store, but he backed out when she remained adamant that he was leaving him outside and left. Without a padlock, he does not want to risk the theft of his expensive machine.

“I go all over the neighborhood.”

While the accident left him with permanent damage and very unstable to his feet, Mota remains a light-hearted and cheerful personality. His arms are stronger than ever, but he had to overcome the resulting pain.

“No pain, no gain,” he said. “I sometimes say to my son, ‘what’s better? Feeling or no feeling?’ It’s better to feel. No feeling, nothing good.

Mota’s life changed forever in November 1984 when he was driving from his then home west of Modesto to his job as a field worker. A drunk driver ran a stop sign near Keyes Road and hit his car. He survived a severe spinal fracture and spent three weeks at Memorial Medical Center and four months at St. Mary’s Hospital.

“My doctors told me, ‘You will never get out of the wheelchair.’ But I started going to the YMCA to start swimming, and I used my wheelchair for maybe a year and a half. I started to stand up and get up on my crutches. I don’t walk much. I’m not going too far. When I have to go far, I take the scooter or the wheelchair. ”

Mota can walk on crutches but his greatest mobility is in his hand tricycle.

His high-pitched whistle – which he began practicing as a child in Mexico – is known to irritate some.

“People ask, ‘Why are you whistling?’ and I say, “I’m whistling because it’s my hobby and I need exercise in my lungs, to blow air and get in.”

Mota adjusts his daily itineraries according to the season, rescheduling his nighttime jaunts later on hot days.

He’s been wearing a helmet, a precaution he’s been taking since the time he rolled over in the road during a turn he made in his first week of using the vehicle.

While some curse its hiss, others appreciate the local character. One of them is Kellie Perez who loves spending time in the park with her kids.

“I always know when he’s rowing because of the distinct whistle,” Perez said. “He always greets everyone who passes by and always says hello with a smile to the children while he is rowing. Such a nice man.

Most people around the park have become accustomed to Mota as a friendly neighbor, but there are times when there are those who make life difficult for him. On one of his outings, a car drove past him at the east end of the park and the occupants threw three eggs at him.

Another time he had been doing several laps in the park when a young man parked with his girlfriend knocked him down. José got in the car and asked, “Why did you point your finger at me? I never see you here. I am here everyday. You don’t want to see me here? Do not come to this park.

The man got no response.

Jose told his wife about the encounter and partly worried and partly joking, she told him she didn’t want the Courier to ever run a story about the man on the slain “bike”.

“Maybe,” Mota said with a laugh. “Too crazy. Now I’m not saying anything.

Because he’s outside, Jose jokes so much that he’s the neighborhood security guard. A Condit Court neighbor recently asked him to keep an eye on his house while he travels to Sacramento, but that was a joke.