Bike thief drives through lock of £3,000 e-bike with angle grinder in shopping center 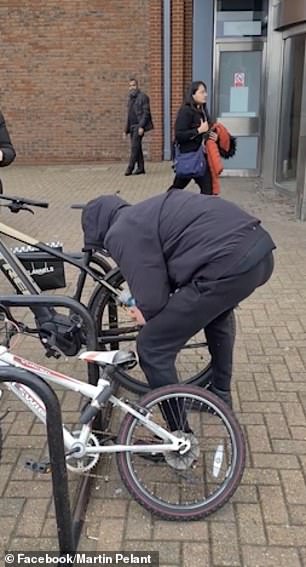 Bike thief drives through lock of £3,000 e-bike with angle grinder in shopping center

DO YOU KNOW HIM?

Do you know the man with the angle grinder in this video? Contact [email protected]

A cheeky thief was filmed sawing off the lock of a £3,150 e-bike with an angle grinder by a shocked passerby in a shopping centre.

The scammer was seen using the battery-powered tool on the bike outside Surrey Quays shopping center in Rotherhithe, south-east London, around 1.30pm on Saturday.

A witness said he was with three accomplices – one of whom was wearing a balaclava and riding a scooter – as he got away with the £3,150 Trek Powerfly 4 e-bike.

Spectator Martin Pelant filmed the robbery and briefly challenged the man as he cut the lock.

Bike owner Adem Lakeman, 31, from Greenwich, London, said he felt ‘sick’ after his e-bike was stolen as he used it to get around while recovering from two herniated discs in the lower back.

In the footage, the brazen thief is seen cutting the lock off the bike outside the bustling mall while his balaclava-clad accomplice lurks in the background. 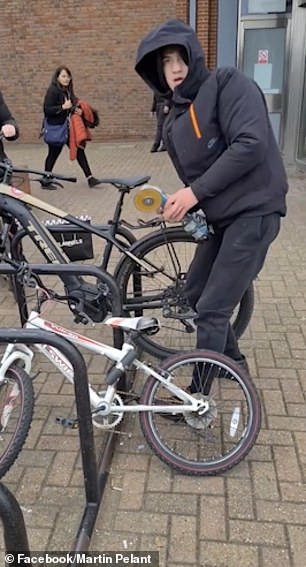 The scammer was seen using the battery-powered tool on the bike outside Surrey Quays shopping center in Rotherhithe, south-east London, around 1.30pm on Saturday.

Orange sparks fly around the hooded man as he crouches on the bike, as shocked pedestrians walk past the man.

Martin says to the thief: ‘Is that your bike?’

The man briefly looks up and says “huh?” before continuing to saw the metal bicycle lock with the angle grinder.

His accomplice helps him pull the broken lock off the electric bike, which is equipped with a front fender and a rear pannier.

The thief then picks up an empty black and white paper bag bearing a Flannels logo.

The clip ends with the thief riding the bike, carrying the paper bag in one hand and the angle grinder in the other.

Shocked onlookers called the police as the brazen daylight robbery was underway and the Metropolitan Police confirmed inquiries were underway but no arrests had yet been made.

The bike’s owner, Adem Lakeman, who is a mechanic with Cycles UK, said he was visiting a friend and stopping at Tesco when his bike was stolen from the busy shopping centre. 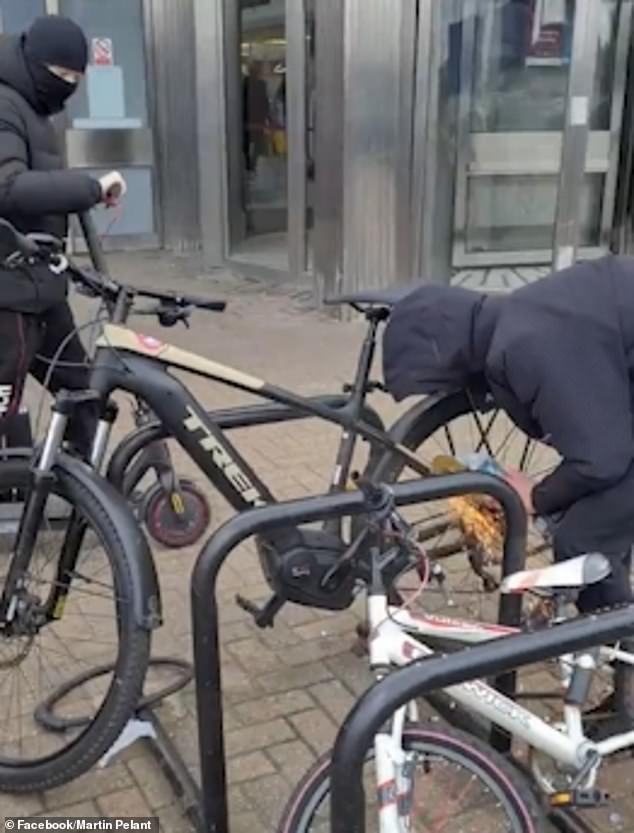 Onlooker Martin Pelant filmed the theft and asked the man if it was his bike as he cut the lock with the angle grinder outside the busy shopping centre.

When he returned to pick up his bike, he found it was missing and spoke to a passerby, who had already called the police and shown him the videos he had taken of the theft.

Adem said he’s owned his e-bike for just over a year and used it to commute to work while recovering from two herniated discs in his lower back.

He continued: “I felt sick after seeing my bike stolen. Suffering from anxiety, it’s the only way I feel comfortable getting around.

“When I started seeing the videos being shared on social media, I felt better knowing people I didn’t know were helping me find the thieves and sharing the theft online.”

He also posted on the Stolen Bikes in London Facebook page to thank passers-by for giving him information about the theft.

He wrote: ‘My bike, a Trek Powerfly 4 was stolen outside Surrey Quays Shopping on Saturday 6th November.

“I’m sure some people may have seen the video of them already cutting the lock with an angle grinder.

“I would like to thank the people who get involved, share the video and give it more attention.

“I received information from one of the viewers who took the video which helped me tremendously.”

Onlooker Martin shared the clip on Facebook and YouTube, where it racked up a total of over 42,000 views.

Commenting on the footage, Martin said: ‘Seriously? In broad daylight? With a grinder in front of a crowded mall? Today’s thieves truly know no bounds. 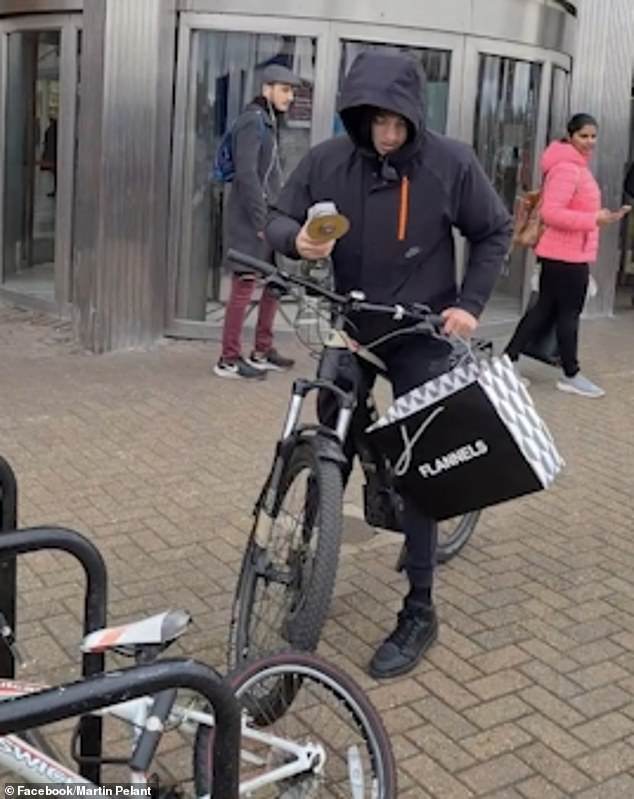 The clip ends with the thief riding the bike, carrying the paper bag in one hand and the angle grinder in the other 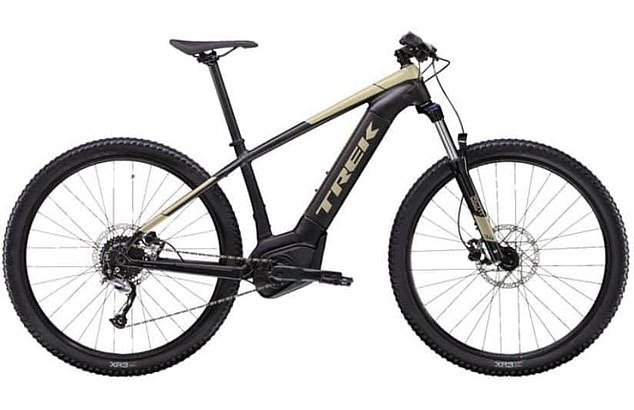 A £3,150 Trek Powerfly 4 e-bike like the one that was stolen. Owner Adem Lakeman, a mechanic at Cycles UK, later posted on the Stolen Bikes in London Facebook page thanking passers-by for giving him information about the theft.

“The officer who came to file a report told the victim that if she found it, she should call his number and they would meet undercover,” he added.

Martin told cycling website road.cc he focused on filming the incident in hopes someone would recognize the thieves from his clip.

“I focused on the one I could get a clear face from,” he said. “I just hope someone recognizes them and they get arrested.

“I never thought something like this could happen in broad daylight with an angle grinder in front of everyone.

“There were quite a few people passing by and some watching from a distance.

“Another passerby was already on the phone with the police who arrived after 15 minutes. Mall security is unfortunately located at the other entrance.

A Metropolitan Police spokesman said: ‘On Saturday November 6 at 1.32pm police were called to a report of a bike theft at Surrey Quays Shopping Centre.

“Anyone with information that may help is asked to contact police on 101 or tweet @MetCC and quote CAD3931/06NOV.”

Do you know the man with the angle grinder in this video? Contact [email protected]