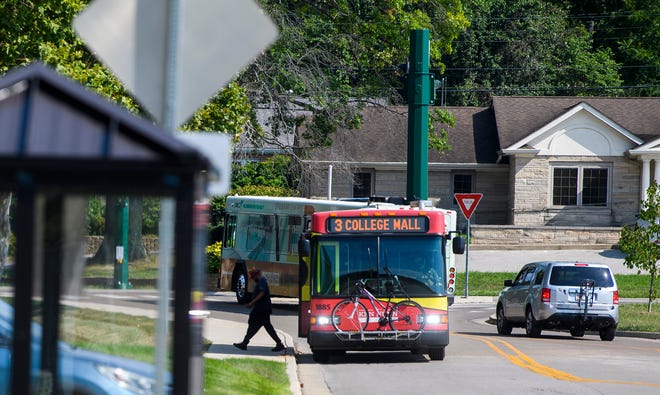 Meanwhile, the City of Bloomington has launched a new website to provide information on buses and bike routes – but also to encourage commuters, especially to Catalent, Indiana University and other other large employers to carpool to reduce the use of single occupancy vehicles.

The bus system recently received a $7 million grant with which it plans to purchase eight electric buses. Existing federal funding will pay for another eight buses by 2024.

BT chief executive John Connell said the system plans to have 60% of its fleet powered by electricity by 2030. Only two of the system’s current 43 buses are electric.

New option to get to campusTrying to get from the east side of Bloomington to campus by bus?

Connell said the system had some initial “problems” with the electric buses, but after working with the manufacturer the issues were resolved. He said the buses are running well now.

“But we are concerned about cost and longevity,” he said.

Operators drive the buses aggressively, Smith said, and some of the diesel buses are still running well after 20 years. Drivers worry about electric buses breaking down or losing charge at certain times of the year, which has happened, he said, although those issues appear to have been resolved.

Smith said the transit system is embarking on many projects at a time of continued driver shortages, though that is slowly improving.

“A lot is happening and everything is falling into place,” he said.

However, he said he also appreciates that Connell has a more ambitious vision for the transit system than previous leaders and he hopes the changes can be implemented effectively with full staff and an increased focus on safety. drivers and passengers.

Smith said the shortage of drivers, especially during the pandemic, sometimes exposed drivers to aggressive passengers, including homeless people, which alienated both drivers and customers.

The driver shortage prompted BT executives last year to agree to raise drivers’ starting wages to $19.02 an hour. By year four, drivers will earn $28.53 per hour, or about $59,000 per year.

Transit officials said eliminating some night bus lines and consolidating lines on the east and south sides of the city has also freed up driving hours. Late-night passengers and those in parts of the East Side can call Uber or Lyft, with the city charging up to $19 for rides.

Despite these measures, Connell said the shortage of drivers still presents “a major challenge”.

As the system adds drivers and has more training, it’s hard to make progress as people quit and retire, he said.

The transit system is also considering moving its administrative offices or expanding its current offices at 130 W. Grimes Lane. Connell said as the system grows, his fleet will need more administrative square meters.

“We’re running out of space,” he said.

The transit system owns the building, but the land is owned by Indiana University, and Connell said it would make sense to acquire the property before exploring acquisitions of adjacent properties. The system has earmarked $250,000 in next year’s budget to hire a consultant to identify possible expansion sites and necessary environmental impact studies.

“There’s a lot of work to be done,” Connell said.

Connell said BT also plans to roll out an internal app that will provide passengers with real-time bus locations and eventually allow passengers to order a Bloomington Transit ride-sharing service similar to Uber and Lyft. The transit system uses ride-sharing services in some areas where it has reduced fixed-route bus service to reduce costs and in response to ongoing driver shortages.

Connell said the transit app could eventually be merged with GoBloomington.

What is Go Bloomington?

The City of Bloomington, meanwhile, has launched a new website, GoBloomington.org, to provide people with real-time bus location information and to offer other alternatives to using single-occupancy vehicles.

Jeff Jackson, the city’s director of transportation demand management, said he encourages every individual and employer to sign up for the service to increase the likelihood of carpooling or carpooling.

The city works with rental car company Enterprise to subsidize the use of rented vehicles for travel. Jackson said the city would provide $500 for the $1,500 monthly rental of a 15-passenger van, with a large employer possibly paying an additional $500. This would mean that the 15 passengers would share the remaining $500 monthly costs ($33.33) plus gas and parking.

While there are no such vanpools yet, Jackson said that as more people sign up to the platform, the likelihood of matches increases. When commuters sign up, they provide information on when and which days they are commuting to work and where, and the platform will flag potential matches.

Jackson said some major employers, including drugmaker Catalent, Indiana University and IU Health, have agreed to participate, and he is also expected to speak with officials at medical device maker Cook.

GoBloomington provides people with information on bus, bike or walking routes between destinations. According to the website, since its launch in early September, it has already offered 196 alternative trips, helped people burn 16,000 calories, reduced CO2 emissions by nearly 260 pounds and saved more than $200.

Mayor John Hamilton’s administration and the Bloomington City Council also raised local income taxes this year, in part to earmark dollars for expanding bus service through Sunday and establishing a line of east-west express transit, although details are yet to be determined.