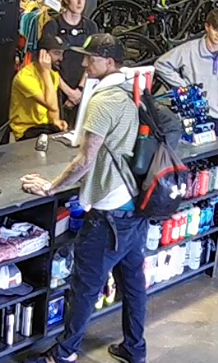 BOULDER, Colo. (BRAIN) – Police have recovered stolen prototype bikes worth $80,000, in part with the help of local retailer Full Cycle. The store owner became suspicious when a man walked in with a $12,000 e-bike and a pair of bolt cutters.

Three bicycles and some other equipment were stolen on the night of March 30 from the headquarters of Boulder Driven, the drivetrain startup linked to the CeramicSpeed ​​component brand.

The next day, a man walked into Full Cycle with one of the bikes, a $12,000 Specialized Levo, an original personal bike owned by Driven founder Jason Smith. The Levo was stolen along with two bikes with prototype drivetrains and other equipment. The prototypes were valued at $70,000 combined.

The man, seen in the store’s security footage below, had bolt cutters sticking out of his backpack.

“The guy came in with an apartment and we sold him a hand pump and then we called the police. He left but the police caught him 2 hours later,” Full Cycle owner Russ Chandler told BRAIN.

“It was so obvious this guy was a thief. He even had bolt cutters in his backpack!” Chandler said in an email to Smith, which Chandler shared with BRAIN.

Police said the arrest of the man from the bike shop resulted in the recovery of one of the prototype bikes and other stolen property in addition to the Levo. Separately, a community member spotted the second prototype bike in another part of town this week and notified the police.

“I am so proud of the great work done by everyone involved in these cases. I would like to thank the members of the community who spotted these bikes, knew something was wrong and called us,” said said Boulder Police Chief Maris Herold. release this week.

Police did not release the name of the suspect arrested after visiting Full Cycle and declined to share further details as the investigation is ongoing, Boulder Police Public Information Officer Dionne Waugh said. to BRAIN.