Burnsie looks back on 60 years in the game 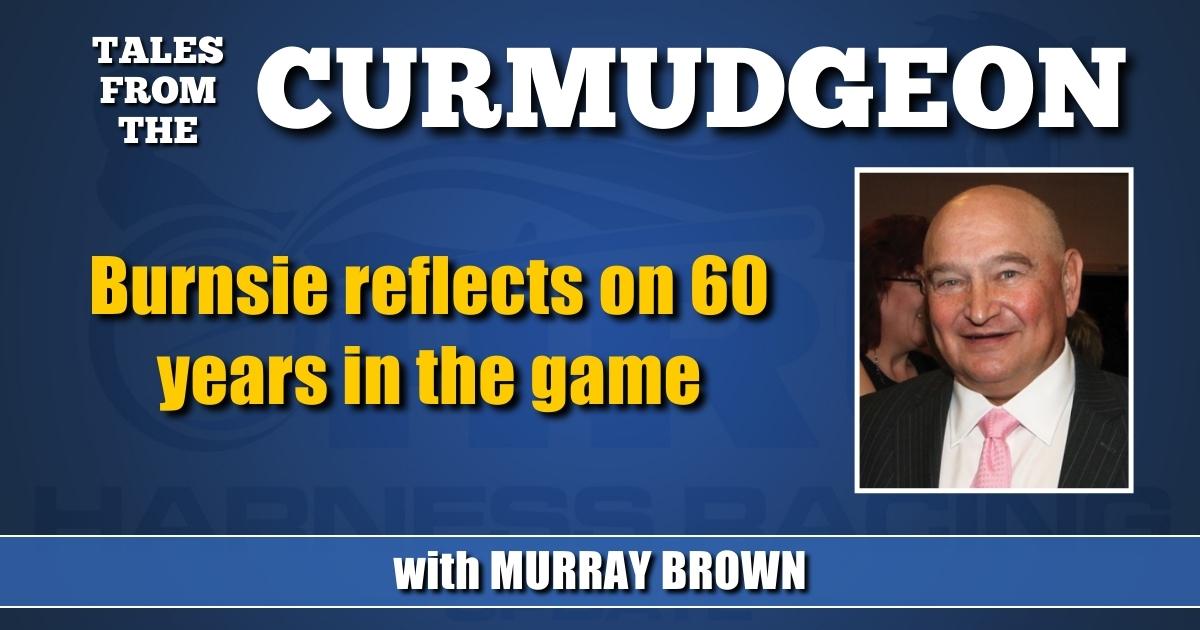 Burnsie looks back on 60 years in the game

John Burns, aka “Burnsie”, was 13 when he first met Clarence “Shorty” Lockhart at the Collingwood, Ontario fairgrounds. Lockhart had a well-known stable of trotters and walkers based at the fairgrounds. Burnsie regularly rode his bike past the fairgrounds and often stopped at the stable at Lockhart. At the time, Burn’s greatest interest, like most young Canadian boys, was hockey. It quickly expanded into horses and hockey.

At the time, aside from fairgrounds, the only operational racetrack in Ontario was Old Woodbine, which would become Greenwood. They only raced in July and August. Burns started working for Lockhart and ended up working twice with the Lockhart stable.

Burns did everything a young man could do around a stable of horses, including grooming, trucking, and training.

At the age of 14, Burns acquired his first horse, a driver named JR Spencer. He won in 2:18 at 2 years old. Lockhart suggested Burns send the colt to Keith Waples, who was racing in the big time so to speak – the Montreal circuit of Blue Bonnets and Richelieu Park. Burns told him he didn’t have the money to pay for the training and upkeep of the horse. Lockhart then made him the proverbial offer he couldn’t refuse. Lockhart would guarantee all of JR Spencer’s expenses. The colt was sent to Waples and he won his first start for him clocking 2:06 on the Richelieu half-mile track. JR Spencer remained with Waples. The additional baggage was Burns, who began a decade-long stint working at the Waples stable. One of the highlights was winning the Centennial Pace in Peterborough with his JR Spencer.

Burns did for Waples essentially what he did for Lockhart. He groomed, trained and shipped horses between Ontario and Montreal.

He describes his time with Waples as the greatest learning experience a young man could have.

“Keith was the nicest person you could ever work for. If you kept your eyes and ears open and your mouth shut, you would learn a lot,” Burns said.

Waples’ longtime partner in the stable was his brother Murray, whom Burns describes as a gruff guy on the outside and a good guy on the inside. Cousin Ronnie Waples, who was destined to become a double Hall of Famer, just like Keith of course, also worked there. Among the owners of the stable were the lumberjack Hector Cloutier and the successful Quebec stable La Ferme Drummond. Burnsie well remembers Mighty Dudley winning the first 2.00 miles at Richelieu Park for Waples.

Dr. Rosario Gauthier, whom Burns remembers as the greatest veterinarian he ever knew, oversaw the health of the horses as well as that of most successful stables in Quebec at the time.

“He was simply the most amazing vet I’ve ever known and a real gentleman to boot. What he didn’t know about a horse’s health probably wasn’t worth knowing,” he said. said Burns.

After 11 years with Waples, Burns decided to go out on his own.

Its first major owners were Dave Morrissey and Bob Hamather.

“Dave loved owning racehorses and paid whatever it took to have good ones. He wasn’t even a little interested in buying yearlings. The first real top horses we had were Merry Isle and Dangerfield Bruce. By then I had moved my stable to The Meadowlands. John Campbell helped me a lot. He found me owners and drove most of my horses. We won the Oliver Wendell Holmes beating Hot Hitter with Merry Isle. Dave had made a deal to buy Dangerfield Bruce for $100,000. I stood there with a lead leg waiting to pick up the horse while Dave consummated the deal with a check. Some time has passed. The horse and I were getting restless. I asked Dave what was the delay? He said the man now wanted $110,000 instead of the agreed-upon $100,000 for Bruce. I told him to give him what he wanted. He did and Dave owned the horse.

“I was at The Meadowlands for four years. I also had horses in Greenwood and would race some in Roosevelt too. It must be too much. I was traveling everywhere. No wonder my wife didn’t stay with me. We divorced. We were up to 72 heads at a time. It was too much. I decided to go home. Morrissey gave the horses to Dave Elliott to continue racing at The Meadowlands.

“I set up a stable to race on the Ontario Jockey Club circuit. John Campbell helped me a lot to get started. He found me owners. Among them were Bill Perretti and Arlene Traub. They both had a reputation for bringing their horses with roller skates on their trunks. They lived up to their reputation.

“Among the first horses I had was a Dream of Glory pacer named Armbro Worthy. I got him from Joe O’Brien’s stable. He was taking breaks on the beat. I got him tried on pace and he kept taking breaks, then I tried him on the trot and after three races he was at the invitational trot.

“I liked Perretti. I got on pretty well with him. One of the horses he sent me was Wild Bill Skipper. He had been a $250,000 yearling. I told Bill that he was no good. He can go in 2:07. Bill asked George Berkner to pick him up.

“I loved Georges. What a character he was. I remember him saying to me about Perretti: ‘Don’t take all his money. He’s got enough for both of us.

Q: You’ve had a lot of owners during your time in the game. You’ve already talked about Morrissey, Perretti and Arlene Traub. Let’s talk about some of the others.

“I guess looking back, there weren’t too many that I missed. When I came back to Canada, I had a very diverse stable.

“One of the first owners I had was Earl Warren. Earl was a well-known radio personality in Toronto. He was a wonderful man, who lacked horses. He paid the bills for 13 horses. I I said it was ridiculous. There was no way he could maintain a stable with that many horses, especially since most of them weren’t very good. We started the Eventually he got to the point where he might not be making any money, but he was losing a lot less.

“I guess the owner I was most associated with was Harold Shipp. He had his horses with Bill Wellwood. He contacted me and told me he wanted to make a change. Would I take his horses and buy him yearlings? Is the Pope Catholic? You are right, I would. We had a lot of success and had a lot of fun together.

“Here are some stories about Harold. He loved Dream of Glory. He asked me to go to the Canadian Classic yearling sale and buy him some Dream of Glorys. I bought seven of therm. The best of them was a filly whose name he changed to Shipps Doll. She won $213,896. I was somewhat limited in my purchases for him, as he was friends with the Armstrong family and wanted to buy primarily from them.

“He had two dogs. They were named Trapper and Schnoops. He had purchased a handsome chestnut Armbro Omaha colt from Armstrong and changed his name to Shipps Trapper ($225,795). For some reason he wanted to get a gray colt which he would change the name to Shipps Schnoops to accompany his chestnut. We were in Lexington. Armstrong had no gray in his dispatch. Harold came across a gray in the Almahurst dispatch. He asked me to look at him. I told him I didn’t like the colt. Harold had to go home, but he told me to get him a gray colt. Stoner Creek was selling a gray colt through On The Road Again of Watering Can I thought he was fine and bought him for Harold. It had to be Shipps Schnoops. He ended up making $658,123. We may not have parted on the best terms. However, on the road, we reconciled and renewed our friendship. He was as good a landlord as there is. goes into sports.

“Two of my dearest friends and partners were sports personalities, hockey player John Ferguson and baseball pitcher Dan Plesac. They are both great guys who really loved their horses and harness racing.

Q: Let’s talk about some of your best horses.

“My all-time favorites would probably be a tie between Towner’s Image and Hardie Hanover. If I had to, I’d give Towners Image a slight edge. I considered his victory at the Jugette as my entry into the big moment.

“Another very good filly we had in the stable was Triplet Hanover.

“Adding it all up, we’ve had five O’Brien Award winners and won two Breeders’ Crowns.”

“1. Billy Haughton – Just an amazing rider and an even better human being.

2. Bill Robinson – It may have taken me a while to recognize him. He carried out a remarkable operation and always beat me.

“4. Brett Pelling — He’s a guy I learned to respect. All of his work is amazing.

Q: Do the same for pilots.

“1. John Campbell – He leads everything on and off the track.

“2. Keith Waples — To quote Neil Diamond, “It was another time and another place. But he was the first really good driver I saw.

“3. Bill O’Donnell – For a set period of time, perhaps best to sit behind a horse.

4. Doug Brown — For many years as good as Canada has ever had.

“5. Steve Condren – An excellent rider and an excellent judge of pace. Took great care of a horse.

Q: What have you done with yourself since you retired?

“Last winter, I worked with Bill Cass. He’s a great guy and an excellent rider. We were two old people taking care of three horses. There are only two left. So I became fired (laughs).

“As with many people, COVID has had a terrible effect on my life and my lifestyle. It kept me from traveling and going to sales. I miss some of the things I took for granted.

Q: What has been your biggest thrill in all your years of racing?

“That should be winning the Jugette with Towner’s Image in 1993. A close second would be Hardie Hanover’s Breeders Crown.”

Q: A word of farewell?

” I have been very lucky. I have always had excellent teachers, precious help and the advantage of being surrounded by and using the best drivers and coaches. If there’s one thing I’ve learned in this life, you can’t do it alone.

You have a question or a comment for The Curmudgeon?
Contact him by email at: [email protected]