Chronicle: Reflection on the epidemic of electric scooters 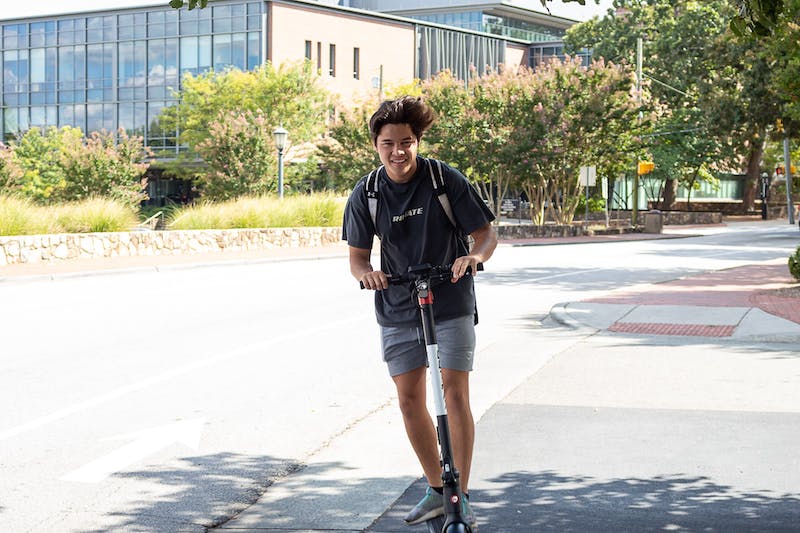 Chronicle: Reflection on the epidemic of electric scooters

When an adult student passes, or should I say ride, near you on what you might call the adult version of the hoverboard, you know it’s time to tackle the growing epidemic in the world. campus-wide: the electric scooter (and now the hoverboard, apparently) invasion.

We had mopeds next to us. We moved away from the bikers. You may even have encountered a motorized skateboard passing you on your walk to class. But if you haven’t noticed already, there’s a new two-wheeler on the scene.

It’s like we learned nothing from the e-scooter mayhem of 2019. Cities literally banned them when sidewalks seemed to be littered with clumsy vehicles more than actual trash. For every five students walking to class, we can now expect to see at least one or two scooter riders (scootees?) trailing behind, desperately trying to squeeze their way around them.

Forget to pedal your bike or God forbid, while walkingup and down the various hills on campus – students on scooters now ride them at unreasonable speeds, the hum of each passing motor doubles as a mocking laugh that tells every on-foot observer, “I can see your sweat through your shirt, come join me.”

This opinion writer takes a stand — I won’t join you!

I get it, especially on the UNC campus in the late August-early September heat. You get to class faster. You don’t walk into the room looking like you’re running a 5K. This fuels your superiority complex to quickly overtake uninspired individuals who have chosen to walk. Okay that was tough but why does everyone who owns one of these things have grade A posture and the perfect riding position “I don’t look weird, you have the strange look”, even if they are those who arrive on a child’s toy to their college classes?

The main scooter users seem to be UNC athletes, so maybe their legs are so tired from all the sporting activities they do (don’t ask me) that it physically hurts them to walk. Maybe I wouldn’t understand, because I’m a non-athlete at heart. Maybe I write out of subconscious jealousy. We’ll never know.

It has also come to my attention that, unsurprisingly, these electric scooters are very expensive. I checked out the electric scooter guide website, and they range from $300 to over $600. And all of a sudden they’re everywhere? The e-scooter audience seems awfully specific and very narrow — these two-wheeled vehicles are by no means accessible.

I choose to be serious now, and I take this whole scooter thing with a grain of salt. The invasion of electric scooters isn’t entirely unreasonable, I just wonder how it grew so quickly. They mix more visibly than the campus bikers of yore (where did they go?) and I’m sure they save the students a lot of time. But my other question is, what is are do they do with all this saved time? Can a scooter let me know?

I guess I’m just asking the scooter riders among us to take it easy. I may be walking slower than you can trot, so maybe an occasional “to your left!” would be nice instead of almost getting run over.

I also apologize for my cynicism – maybe now is a good time to admit that I was never one of the lucky kids who received electric scooters for Christmas. So with that, get on and wear your helmets.

To get the day’s news and headlines delivered to your inbox every morning, sign up for our email newsletters.