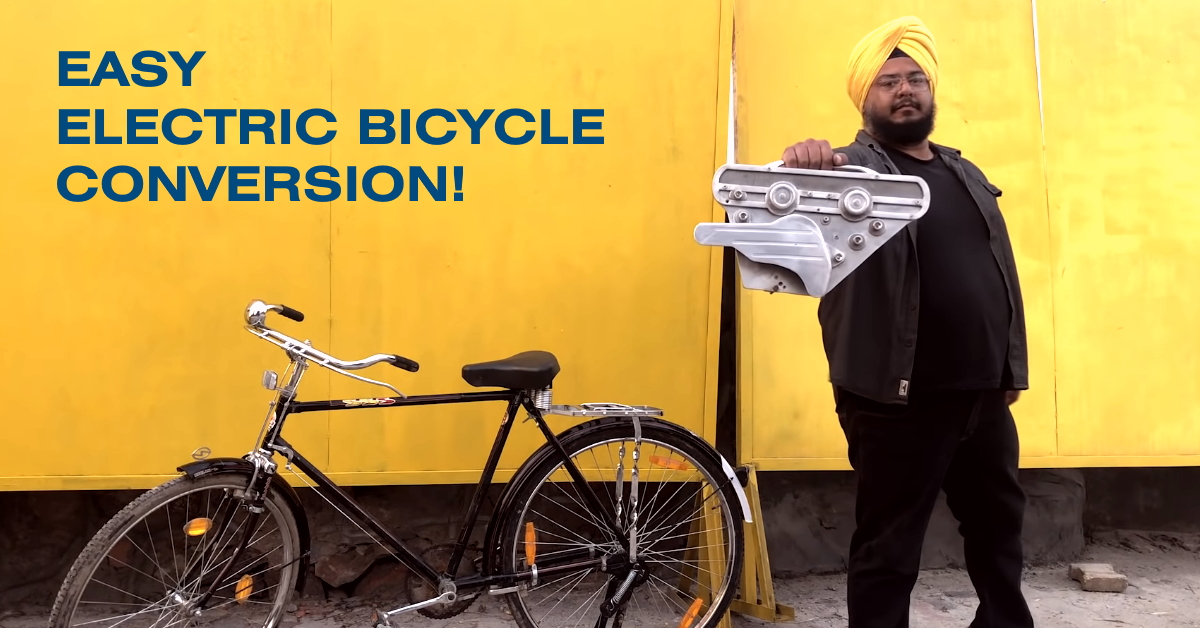 The single bar bike has taken on the responsibility of being the country’s most reliable mode of transportation for many decades now, but with the ongoing electrification of automobiles in the country, this good old bike was long overdue for an upgrade. . Taking note of this, the inventor and founder of Dhruv Vidyut, Gursaurabh Singh has come up with an amazing device which goes by the name of Dhruv Vidyut Electric Conversion Kit (DVECK) which helps the single bar bicycle used by majority of Indian citizens to transform into a motorized, battery-powered vehicle.

Impressed by this phenomenal device, Mahindra and the leader of Mahindra Group, Anand Mahindra who is known to tweet fascinating things from time to time, used his Twitter handle to share this amazing invention. The Mahindra boss in a 3 part tweet shared a video of this exact invention and wrote, “This has been doing the #Signal rounds for the past few days. It is not the first device in the world to motorize a bicycle. But it’s a) Great design – compact and efficient b) Rugged – loved the mud work, making it an all-terrain! c) Safe d) Savvy—a phone charging port!”

Also read: 10 DC Design cars and how they look in the REAL world: Maruti Swift to Mahindra XUV500

Singh, who is the inventor of this conversion kit, created it to transform the lives of 58% of our nation’s commuters who use the single bar bike as part of their routine to commute to and from work. In the video, the specs of the conversion kit were uniquely displayed as the inventor displays various signs placed in the background while riding his motorized bicycle. Some of the highlighted specifications of this kit are that it has a top speed of 25 km/h with a payload capacity of 170 kg. The conversion kit also has a range of 40 km on a single full charge.

Later in the video, Singh also showed off some of the features of the kit as he put it through its paces. The founder first showed that even after being submerged in mud the kit still worked perfectly and moments later he also lit the kit on fire to show off its flame retardant capabilities and finally he threw a bucket of water to say that the kit is also waterproof. .

Some other features that were highlighted in the video were that the kit is a complete bolt-on piece and no welding, cutting, or modification is required for it to fit. The video also pointed out that the kit is made from aircraft-grade aluminum and due to which it is lightweight and rust-proof. The kit is also equipped with a phone charger and a USB port as well as a port to charge the kit. Finally, the inventor also shows him cycling on the bike because he mentions that the kit can be charged to 50% with only 20 minutes of pedaling.

Anand Mahindra in the second and third part of his tweet praised the inventor and his invention and said, “But what I appreciate the most is his empathy and his passion for those hard workers for whom the humble bicycle is still the primary mode of transportation. It’s a good reminder for all automakers focused on disruptive EVs that THIS EV revolution is perhaps the most important. He also added: “It is not inevitable that this will be commercially successful or substantially profitable, but I would always be proud to be an investor…I am grateful if anyone can put me in touch with Gursaurabh”