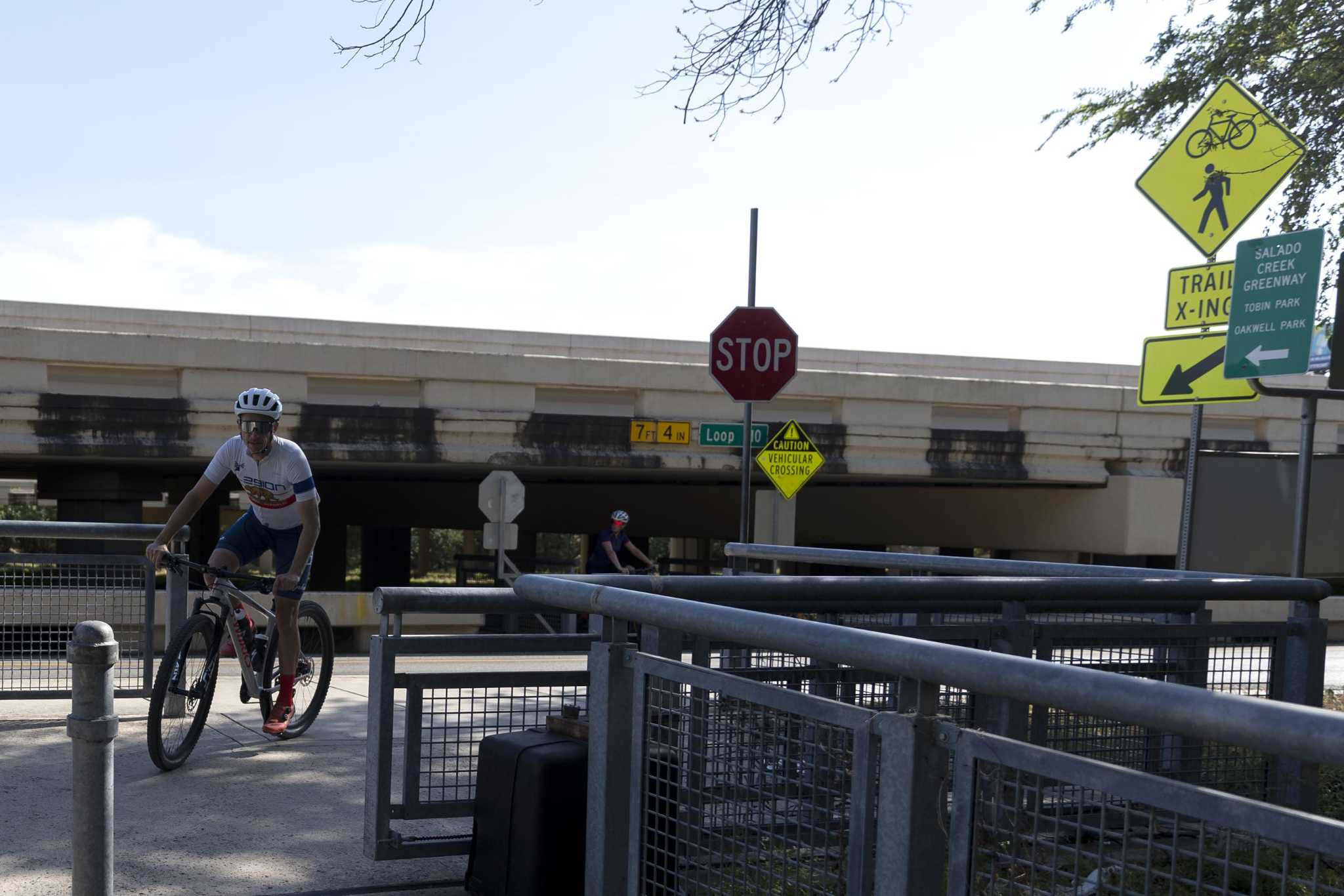 Craig Gulledge, a muscular, bearded cyclist and fiery competitor in the San Antonio Highland Games, was pedaling home on the Salado Creek Greenway less than an hour before the popular hiking and biking trail officially closed at dusk.

But he never succeeded. Gulledge, 53, died trying to cross an unusual and dangerous intersection where the trail meets a one-lane commercial access road at the entrance to the Los Patios shopping and dining complex. His death is one of three local bicycle fatalities reported in March.

In a statement, Gulledge’s widow and her three children said they hoped city and state officials would improve safety at the scene.

“Our family supports all efforts to make this intersection safer so that no other family has to suffer such a tragic loss,” they said.

Police believe Gulledge may have ignored a stop sign and warnings to cyclists to get off and cross the road with their bikes. But members of the city’s Linear Creekway Parks Advisory Board said the intersection had blind spots and sloping pavement that were dangerous, even for those who obeyed the signage.

“I have come to a stop. And I looked. And no car was coming. As I started pedaling, there’s a car screaming down the hill,” said Sherri Dugas, a board member who represents City Council District 10 on the northeast side, where find the intersection.

Crossing from the south, as Gulledge was, the concrete bridge at the main westbound 410 Loop access road blocks the view of all oncoming cars unless the viewer is right next to it of the road. From the north, cyclists usually have to look over their left shoulder to see if a car is coming.

The council is working with city parks, public works and transportation officials to improve safety throughout the Howard W. Peak Greenway trail system, which currently covers half of the planned 180 miles of trails surrounding San Antonio . But the March 17 death drew attention to a place that panel chairman, avid cyclist Greg Hammer, recently called a “tricky intersection.”

“We are very worried about this. We want to do everything we can as an advisory board to bring our concerns to the board” and help ensure that more safety measures are added if a traffic study shows they are warranted, Hammer said.

Council and city staff are considering ways to improve safety at the crossing, possibly with a curved mirror, more warning signs and a barrier that slows approaching cyclists.

They are also in talks with the Texas Department of Transportation about a reduced speed limit in the 45 mph zone.

Most cyclists, especially serious cyclists with shoes that attach to the pedals, “find a way to stay on the bike,” even if they stop, Hammer said. They would rather continue pedaling than descend.

The one-lane quarter-mile road that separates the main westbound access is used by motorists to Los Patios, which has a driveway entrance just past the trail junction. The road also connects to a church and an office complex at the other end, where it reconnects with the main access road.

But Dr. Randall S. Preissig, a board member representing District 4 on the southwest side, said drivers use the road as a rush hour bypass.

“There will be people coming down this little alley, cutting at 70 miles an hour, trying to get three cars in front of people when they come in,” Preissig said.

As possible solutions, council members spoke of speed bumps, rumble strips, a stop sign, an improved pedestrian crossing system and an additional turn signal to warn motorists approaching the crossing. at the level. Because the road is on the freeway right-of-way, the city cannot make changes to it without TxDOT’s permission.

“The biggest issue is traffic speed at the crossing, and that’s what we need TXDOT to look at,” Hammer said.

Laura Lopez, spokeswoman for the district’s National Transportation Agency, said she would review the crash and offer suggestions. The city, which maintains the crossing, would be responsible for any traffic study, she said.

In San Antonio, the number of deaths in bicycle and motor vehicle accidents is in the single digits, with at least one per year since 2000, according to city data. Six deaths, the highest number during this period, were recorded in 2016. More recently, there were five deaths in 2019, one in 2020 and five last year. Meanwhile, the number of pedestrian fatalities in vehicle crashes peaked at 67 last year, from 64 in 2020.

This year, three cycling deaths have already been reported, all in March.

On March 13, a cyclist died in an accident in the 2900 block of the SW 410 loop. Days after Gulledge’s death, a third cyclist was fatally struck by a suspected drunk driver in the 300 block of Basse, near the Alamo Quarry Market, March 22.

San Antonio has long struggled to develop a safe network of bike lanes, paths, and trails that separate cyclists from motor vehicles. In the latest ranking of US cities by the National Highway Traffic Safety Administration, using pre-pandemic data from 2019, San Antonio was seventh, tied with Chicago, with its five bicycle deaths. The Safety Administration estimates that bicycle fatalities rose 5% in 2020 to 891 nationwide.

San Antonio’s trails have become a popular exercise outlet during the pandemic. Using digital counters in multiple locations, park officials estimated that trail usage had doubled from just over 23,000 people in May 2019 to nearly 57,000 in May 2020.

Now the city plans to incorporate the trails into an updated cycling mobility plan. Tomika Monterville, director of the city’s new transportation department, said the organization’s main budget request for next year will be an update to the 2011 bicycle master plan that will define the role of trails, which are increasingly used for commuting to work. or the store – not just hobbies.

Monterville, speaking to the Parks and Recreation Board recently, noted San Antonio’s past “dismay” with bicycle mobility, with the city taking a piecemeal approach, adding bike lanes to streets being rebuilt.

“But it’s really not safe, and so we have a lot of accidents and incidents,” she said.

The updated mobility plan will guide the development of a primary network of cycle paths and amenities, overlapping with a secondary low-volume cycling infrastructure system, she said.

Although some fear that progress on the trails will slow because there is no longer an 1/8 cent local sales tax in place to fund their construction, the city, Bexar County and the San Antonio River Authority have recently reached an agreement to complete the environmental systems and projects on local streams. Monterville said she will work to raise grants to help realize a vision San Antonio has had since the 1990s of a loop of hiking and biking trails around the city.

“This bike master plan is going to include those trails, and we’re going to come full circle,” Monterville said.

With the system half complete, there is no other crossing like where Gulledge died, Brandon Ross, who oversees greenways as the city’s special projects manager, told the parks panel. linear. But he said the city is looking at all crossings “and trying to figure out what else we can do — and also making a habit of inspecting them from time to time” for worn or faulty items.

Preissig said it’s better to have too many warning signs and safety equipment than too little.

“I just want to make sure that every one of these intersections is over-signalled, over-crowded, over-carried, over-everything,” he said.

The authorities remind cyclists and motorists to respect the signs and to prioritize safety, in particular at the crossing of the Salado path. Recently, someone had placed a foot-high bamboo cross next to it.

Tracey Gulledge, whose husband died at the scene of the accident, did not know who left the cross.