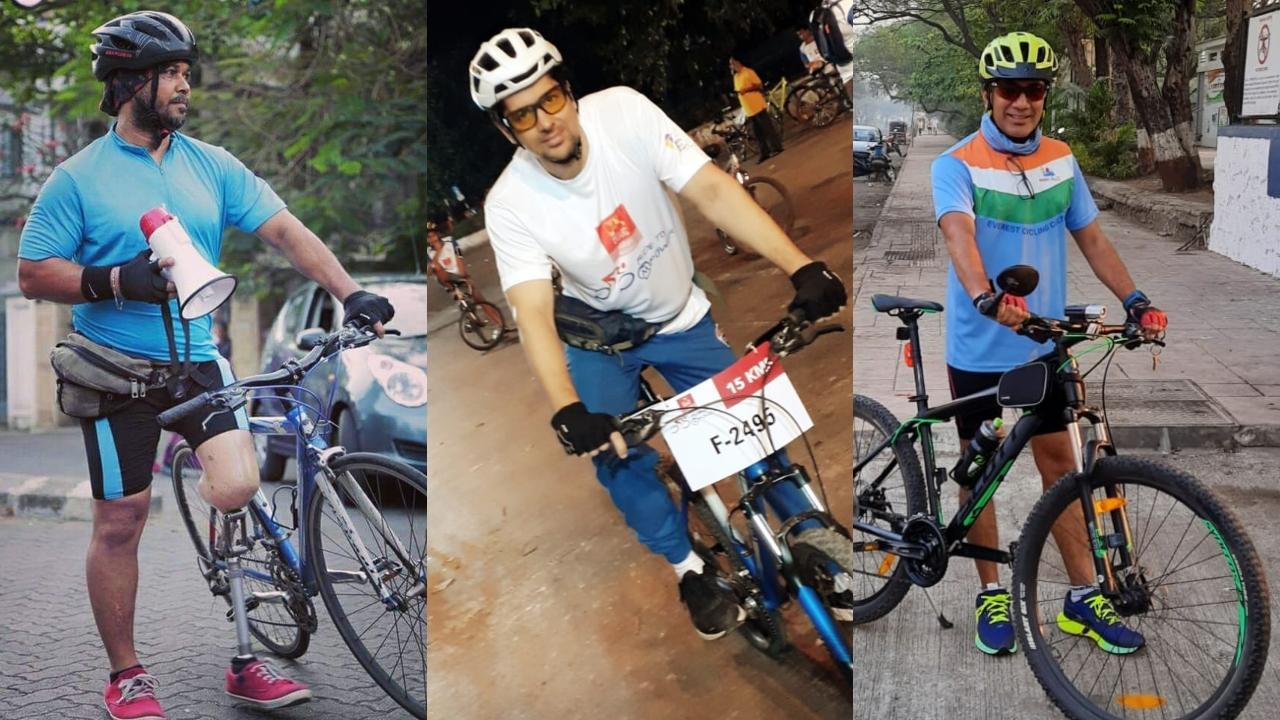 According to a road accident data analysis report released in 2021 by the Mumbai Traffic Police, cyclists were among the most vulnerable road users in the city in 2020, except for motorcyclists and pedestrians.

While the Mumbai Police are encouraging cyclists to take part in the ‘Sunday Streets’ initiative, disabled people in the city have suggested that with more such initiatives, there is a growing need to ensure the safety of cyclists, especially those with special needs. As the 6th UN Global Road Safety Week takes place May 13-17, mid-day.com spoke to a few cyclists about their experience pedaling around town.

For 47-year-old amputee Vinod Rawat, discouraging remarks from people while riding their bikes are common. While some appreciate his zeal, others question him for “risking his life to ride with an artificial limb”. Vinod was six years old when he was run over by a lorry driver on his way home from school in Bhandup. He lost a leg in the accident.

Rawat says: “As a child, I saw people riding bikes and I wanted to do the same one day. In 1997, my life changed after I received an artificial limb. The first thing I did was learn to cycle. within hours I was able to keep my balance, and within days I was riding my bike on my own. It was like a dream come true.

Commenting on his experiences driving around the city, Rawat who works as a project manager at Jaipur Foot’s branch in Mumbai says, “A few days ago, while I was waiting at the signal near Kala Nagar, a man said to a passenger: ‘Look at him; he has no legs, but he wants to ride a bike.’ Such comments, however, have little effect on him, says the cyclist. ‘I overcame all obstacles and cycling is part of my life, no matter what people say. After hearing such comments, I smile at them instead; some even congratulate me on my courage,” he adds.

Mid-day graphic designer and hard of hearing cyclist Vaseem Mohamad Patel has similar stories to share about his daily challenges. “There are very few streets suitable for cyclists in the city, and those that exist are in poor condition, with poor signage. There is always a fear that I will hurt myself while riding. Many speed bumps do not have a good indicators or are not Some manholes have mesh covers, which can cause an accident since the tire of the bicycle can get stuck there, ”explains the resident of Bandra, demanding that the authorities install better infrastructures for people like him.

Speaking about the difficulties encountered during rush hour in Mumbai, Patel says: “You will find more cyclists in the evening as they come home from work or cycle to keep fit. However, this is also a peak time. in Mumbai. If we had more dedicated cycle lanes, it would not only make cycling risk-free, but also encourage people of all age groups to take up the activity. To encourage cycling, it should also be allowed in gardens and parks.

Cyclists among the most vulnerable road users

According to a road accident data analysis report released by the Mumbai Traffic Police in December 2021, cyclists were among the most vulnerable road users in the city in 2020, except for motorcyclists and pedestrians, as the three together accounted for 93% of the total fatalities. in Mumbai, motorcyclists (49%), pedestrians (42%) and cyclists (2%).

Recalling an incident a few years ago, Mohan Sreenivasan, another hearing-impaired cyclist, said: “While passing a signal, a rickshaw swerved in front of me instead of leaving me. pass. As a result, I lost my balance and fell, but luckily I only got a cut on my knee. Imagine if there was a vehicle behind me?”

The 51-year-old, who has cycled since growing up in the Reserve Bank of India quarters of Bombay Central, laments that authorities have focused solely on building subways and flyovers, but cycle paths have not yet caught the eye. they need. “Such trails would not only attract avid cyclists, but could also be used to get to schools, colleges and workplaces, enticing people to switch to cycling both as exercise and as a cost-effective mode of transportation” , he said.

Lack of facilities for cyclists

As a hearing-impaired cyclist, Sreenivasan says cycling on Mumbai’s roads carries many risks as he cannot hear traffic. “Also, motorists don’t have the patience to wait for me to give way. There have been cases where they tried to pass me after I honked their horn. Of course, they don’t know that I don’t hear It would help if authorities educate motorists about something as simple as recognizing cyclists’ hand signals, giving them enough space on the roads, and slowing down on narrow streets,” he says.

Rawat, who has so far taught cycling to around 40 disabled people, agrees. “People in Mumbai need to be more respectful towards cyclists. I have noticed that some motorists are arrogant, who keep honking their horns to overtake. Just like in other countries, cycling culture is also booming in the city, hence more tracks, secure parking spaces and better infrastructure are the need of the hour,” he says.

Abdul Rab Kazi, founder of Everest Cycling Culture, a group of 3,100 cyclists in Mumbai, including five with disabilities, says: “Few people cycle to work due to poor last mile connectivity. Also on trains, it is almost impossible to transport a bicycle, or even park it at stations. Beyond infrastructure, we need to educate motorists to encourage the use of bicycles as a mode of transport. Explaining the measures to ensure the safety of disabled members of the group, Kazi says, “We keep two or three cyclists around them to ensure safety in traffic. In case of injury or puncture, they can get immediate response. other cyclists.

On cycling which is gaining popularity, Mumbai Cycle Mayor Firoza Suresh said, “Lately there has been an increase in the number of cyclists especially during the time of Covid-19 as more and more people started the activity for recreation. To ensure safety, people should always wear helmets and reflective jackets when riding at night. In the case of a disabled cyclist, a simple “informational message” on the jacket might come in handy.”