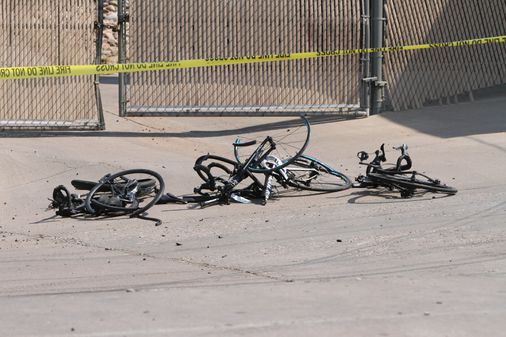 The suspect, whose name has not been released, was hospitalized in critical but stable condition after fleeing the scene of the crash on Saturday and being shot dead by police outside a nearby hardware store in the mountain town of Show Low, about a three-hour drive northeast of Phoenix.

Four of the injured runners were hospitalized in critical condition and two others in critical but stable condition on Saturday. One was airlifted to a hospital near Phoenix.

Authorities did not immediately provide updates on Sunday.

“This was a horrific event,” police spokeswoman Kristine Sleighter said in a statement. “Our community is shocked by this incident and our hearts and prayers go out to the injured and their families at this time.”

Witnesses said crumpled and broken helmets, shoes and bikes were strewn on the street after the accident, and a tire was stuck in the grille of the truck, which had damage to the top and sides and a bullet hole in a window.

Police say a Ford pickup truck hit the cyclists around 7:25 a.m. Saturday in downtown Show Low during the annual 58-mile (93 kilometer) Bike the Bluff race that had 270 participants.

Tony Quinones, of Santa Fe, New Mexico, told The New York Times that he had been riding for about six minutes with other cyclists aged 55 and older when a black pickup truck traveling in the opposite direction hit crossed three lanes and headed towards the cyclists.

Quinones said he assumed the driver was headed for a parking lot. Instead, the driver sped directly into cyclists ahead of 55-year-old Quinones.

“He drove his truck directly and intentionally into our group, and you could hear him speeding up,” Quinones said, adding that he saw bicycles and bodies flying.

After the driver hit a telephone pole, cyclists rushed towards the truck and began pounding on the windows, yelling at the driver to get out, Quinones told The Times.

But rather than stop, he said the driver slammed on the gas and backed up, rolled down the road, turned around, then drove towards the cyclists.

Payne said the driver did not comply when officers tried to arrest him, but the circumstances of the shooting were not immediately disclosed.

The Navajo County Sheriff’s Office and the Arizona Department of Public Safety participated in the investigation.