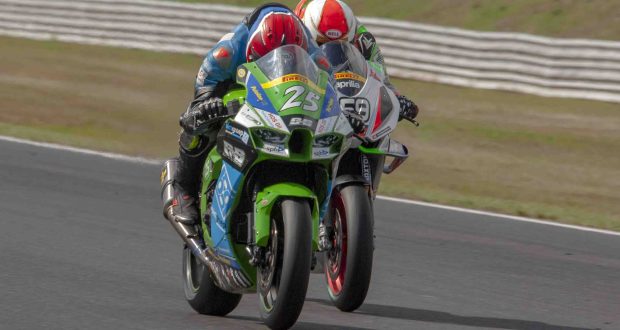 The G&S Racing Kawasaki team traveled to Norfolk for round eight of the National Superstock and Junior Superstock Championships which took place at Snetterton this weekend.

Jorel Boerboom’s solid top 20 finish was the highlight for Wyberton’s side, but there was an unfortunate non-finish for teammate Zak Fuller.

The team had received additional support from Bitubo in time for this Junior Superstock Kawasaki meet, as they provided a factory fork and suspension kit – which was used for the first time in the free practice sessions.

New Zealand rider Fuller was enthusiastic about the improvements and rode well in free practice in mixed weather conditions.

Qualifying was on a dry track, but wet weather tires were the order of the day and Fuller finished in 15th place for a fifth row grid position.

He got off to a great start, moving quickly through the field, but was caught out by a cold tire and slid out of the race on the opening lap.

Dutchman Boerboom made his ninth start in the senior Superstock race and got off to a good start, moving up to 18th on the opening lap.

But the race was ruined by a massive accident, which brought out the safety car. When the race resumed, Boerboom moved up to 17th before dropping to 20th on the penultimate lap.

However, the driver who had passed him retired on the final lap which promoted Boerboom to 19th where he remained at the flag for his best result of the season so far.

Team manager Tom Fisher said: “It was a difficult weekend with the weather and of course the mood on the track was gloomy after the passing of HM the Queen.

“It was decided that the meeting would continue, but as a sign of respect, we all wore black armbands and observed a minute’s silence on both days of racing.

“Zak made a rookie mistake in his race as he was trying a bit too hard and slipped in the early stages. It was disappointing as he was doing so well in training and would have been difficult for the podium.

“Jorel rode well and broke into the top 20 for the first time. This is his first year on the big bike and he is really getting used to it now and getting better with each ride.

The next round will be at Oulton Park from September 23-25, where both riders will have two races to go.