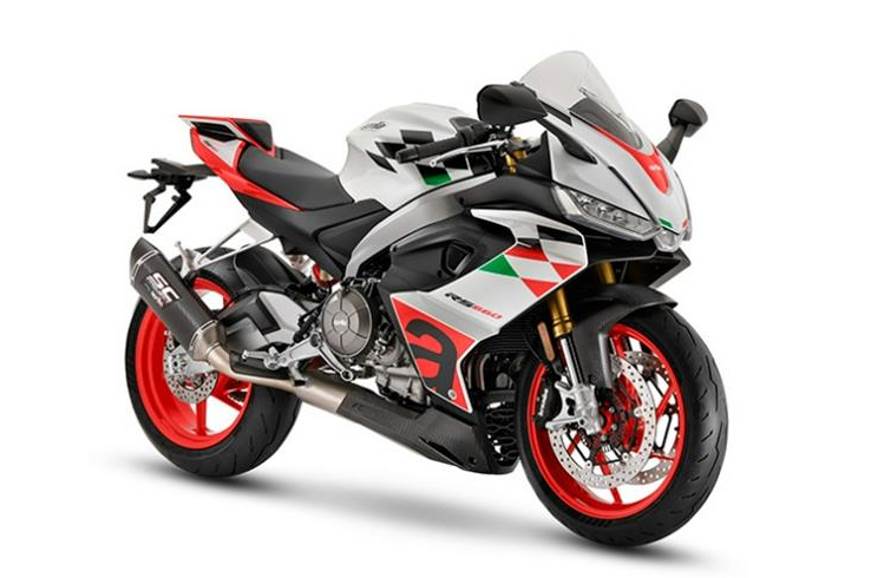 The Aprilia Electrica is the company’s new concept electric motorcycle that has a rather supermotard design.

The Piaggio Group showcased a variety of 2023 model year two-wheelers at EICMA 2022 under its Aprilia, Moto Guzzi and Vespa brands. Two of these products are electric. Here is a list of the vehicles presented.

Aprilia previewed its electric motorcycle concept, which has a fairly supermoto design with a high seat and minimal body panels. You can also see a twin-spar chassis with the battery and motor tucked inside. The frame itself is suspended by a USD fork and monoshock, and the bike rolls on what appears to be a pair of 17-inch wheels shod in Pirelli tyres.

Aprilia has yet to reveal battery or motor specs; but, at first glance, the bike looks more mass-market than an exotic EV.

The RS 660 Extrema is the lightest version of the bike to date, achieved by adding a number of carbon fiber parts. Standard equipment includes a new, lighter, road-legal exhaust system. The front fender and the new engine cover with an all-new design, both in high-quality carbon, also contribute to the overall weight reduction. The result is a bike that weighs 166 kg while making 100 hp.

In addition to the standard electronics on the RS 660 (traction control, cornering ABS, wheel control), the RS 660 Extrema also has software to switch the shift pattern to a GP-style setup.

The V100 Mandello opens a whole new chapter in the history of Moto Guzzi. It is the first Moto Guzzi to be powered by the new “compact block” engine, with its refined technical characteristics. The V100 Mandello develops 115 hp at 8,700 rpm and a maximum torque of 105 Nm at 6,750 rpm. Beneath the bodywork is a compact, lightweight chassis, suspended by USD forks and a monoshock. And since the bike is designed for touring, the riding position is relaxed with a generously roomy saddle. 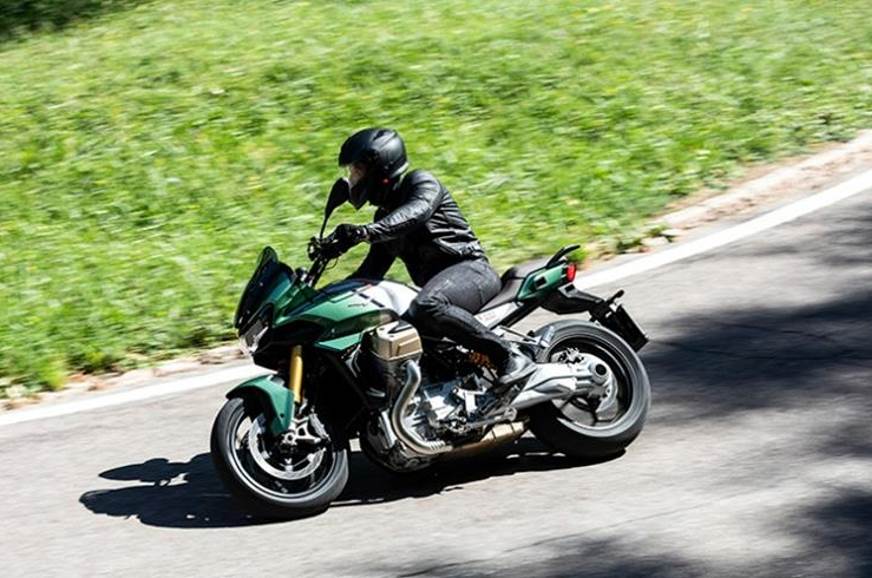 The classic V7, one of the best-selling Moto Guzzis, now receives a special edition. It features a special Shining Black color scheme, with contrasting graphics and red details on the tank. The Moto Guzzi V7 Stone special edition is powered by a 66.5 hp and 75 Nm engine.

This special edition Moto Guzzi V9 Bobber looks rather special with its unique paint job. The company calls it a special workshop with a two-tone, black and gray color scheme. Complementing the black bodywork, the engine’s matte black finish contrasts with Moto Guzzi branding on the cylinder heads. Speaking of the engine, the 853cc mill puts out 65bhp and 73Nm. Another special feature of the bike is the street-legal slip-on exhaust.

Piaggio has unveiled the 2023 version of the 1 electric scooter and it offers more performance than the previous version. Called Piaggio 1 Active, it has a peak power of 3kW, enough to propel it to a top speed of 60km/h and that’s enough for the urban jungle. Battery range is also quite decent at 85km and the fact that it can be removed and recharged at home or in the office adds to the convenience. Other scooter features include full LED lighting and digital color instrumentation. The company says it’s the only e-scooter in its segment with a trunk big enough to fit a full-face helmet.

That GTS “tie” on the front bumper is new, as are the metal body profiles, and the entire lighting system is now fully LED. The rear part is also new, including side panels, a license plate holder and new shapes for the lighting system. The mirrors rest on a wider and more ergonomic handlebar. 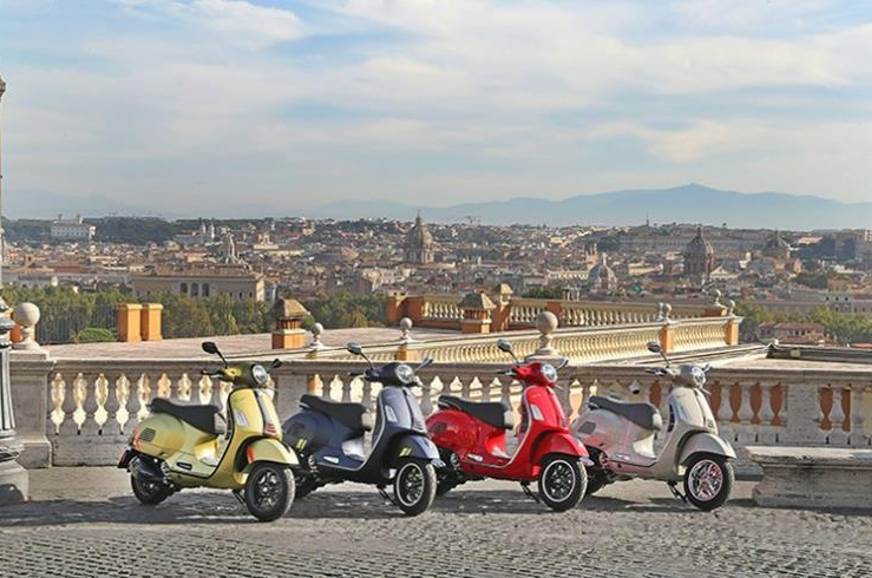 In terms of comfort, the new Vespa GTS receives a revised front suspension with better ability to absorb any type of bump. ABS and traction control systems are standard. In all, four versions of the range and 14 colors are offered.

Built on the basis of the Vespa GTS, the Vespa GTV is reborn with a completely new look and features some design elements reminiscent of the original Vespa, such as the headlight on the front fender. The Vespa Primavera Color Vibe, on the other hand, has a special two-tone livery with the blue wheels adding a touch of contrast. 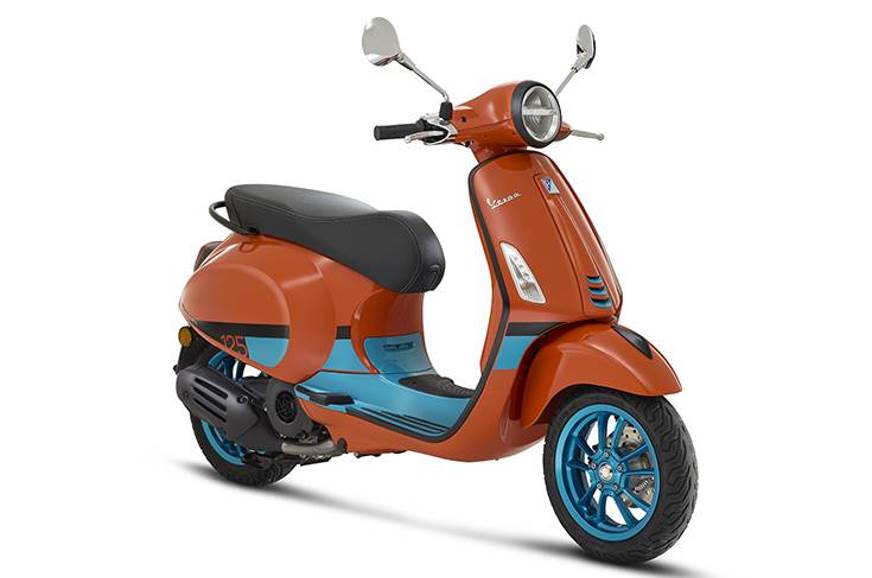 To complete the list of Vespas, the 946 10° Anniversario celebrates 10 years of the Vespa 946 and wears a special green color.