Electric Unicyclists Have An Illegal Good Time In NYC 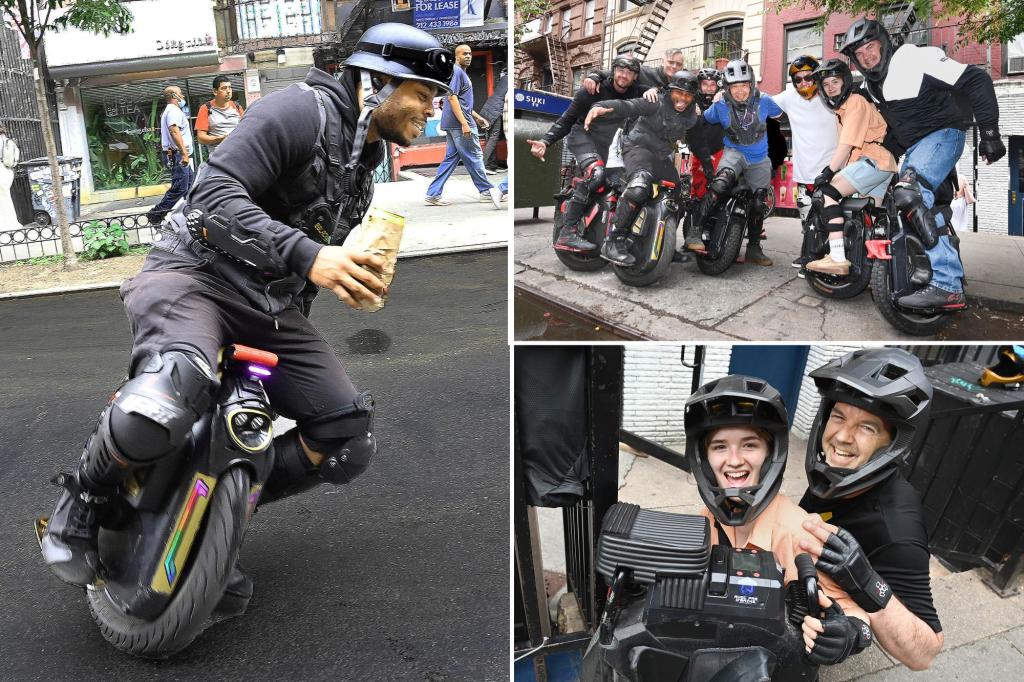 Electric Unicyclists Have An Illegal Good Time In NYC

Navigating an electric unicycle through Gotham’s unforgiving streets and jammed traffic might not be everyone’s idea of ​​Nirvana.

But don’t tell that to the gang of 200 electric unicyclists who meet at the Kung Fu tea shop in the East Village for a cruise after a good cup of Sesame Wow milk or Cocoa Lava Slush.

In June 2020, the city council approved a law to legalize electric bicycles and scooters.

However, electric unicycles are illegal in New York, the NYPD has confirmed, but the people who ride them insist they are not in danger.

“We’re just looking to get around the city like everyone else,” said Paul Engle, 43, from Southern California. “We follow the rules. … We occupy less space in a city of eight million people. We’re just looking for the gaps, man.

Engle talks about a wheel like a surfer catching that perfect wave. “It was a hobby to start with. It was just something to do. Pretty soon it became a way of life. There’s something about the absolute presence required to ride one of them. in the world that is meditative and therapeutic,” he said.

Other enthusiasts have come from further afield, even from Canada and Malaysia, to get in tune with the Bubble team’s small emporium in St. Mark’s Square.

“Some people look at us like we’re from outer space,” said electric unicyclist August Hill, 33, and the NYPD might agree, calling the contraptions illegal despite their growing ubiquity.

Unlike an e-scooter or e-bike, there are no handlebars on motorized unicycles. Battery-rechargeable one-wheel gadgets are compact and some are even light enough to carry around.

The driver straddles the wheel on footrests and, like a Segway, steers the vehicle and keeps it moving by skillfully shifting their body weight.

And they are gaining ground on other modes of transportation on congested city streets, says Hill, a Manhattan resident, adding that he had his own epiphany about five years ago while lamenting another torturous commute through the city.

“I was sitting on 34th Street contemplating what I wanted my life to be like when a guy passed me on an electric unicycle and that was it,” the former logistics manager said, adding that he had started with a small wheel but had since graduated. “Bigger, sturdier machines…I now own my time and can be where I want to be. It makes the world so much smaller and more accessible.

Hill claimed that a rush-hour car ride from Lower Manhattan to Harlem could take 90 minutes. “It takes us [electric unicyclists] about 15 to 20 minutes,” he boasted.

Hill and Engle formed True2One, an “organized group of personal electric vehicle (PEV) enthusiasts who share a passion for driving, community, and PEV culture.” The group has its own Instagram page with nearly 8,000 followers.

The Kung Fu Tea store became their headquarters after the owner, a friend, also caught the one-wheel bug and allowed the growing unicycle community “to have a place to sit and store their chargers and reload their wheels,” Hill said.

Hill said the exercise involves creating a flyer and posting it on social media.

“When we ride, the chief will have a map of where we want to go,” he explained, adding that last week a group of Canadians joined a ride that went from Lower Manhattan to West Side Highway to Harlem, across to Randalls Island, then back down Lexington Avenue. The hike started and ended at St. Marks Place tea shop.

“Movements are spontaneous. Someone can do a ride and have people there in an hour,” Hill said, adding that the group embarks on about 14 rides each week.

The big date, “The Broadway Bomb,” is slated for October and the plan is yes, a trip that “will take attendees to Broadway,” Hill said.