Trenton, New Jersey— Matt Brown’s family is a constant presence when he’s racing. Unfortunately, they missed one of his biggest nights while driving through traffic.

In August, the 29-year-old picked up his first career victory with Winning Misty, a trotter with whom he recorded his first four training wins in 2021. And while his family was there for those triumphs, they were visibly absent for this. memorable driving victory.

But it wasn’t due to disinterest or lack of effort.

Matt Brown celebrated in the winner’s circle after Winning Misty picked up one of his four wins in training for him in 2021. Photo Conrad.

“They all got stuck in traffic,” Brown said. “They usually go to the races, but there was a bad accident that night and they were all stuck behind. I told them not to worry, it’s okay, there’s plenty other races. I ended up winning that night, so they were all pretty upset.

It also got Matt thinking playfully.

“I told them they were banned for a while from coming to the races if I wanted to win when they weren’t there,” he said with a laugh. “I told them ‘Hey, I have to win races here.'”

Brown was actually surprised to get that first, because his trotting 4-year-old “just wasn’t as snappy as last year. I was glad to see her go back to her old ways that night.

Winning Misty started on the rail and finished second at quarter pole, and Brown stayed there until halftime.

“I pulled it halfway, and I was about two wide the whole back half,” he said. “Coming home I saw (Dan Noble), who was ahead of me, working pretty well on his horse. I thought maybe I had a chance there once we got to the top of the straight and maybe she could bring it home. She did, won by half a length.

Brown felt that his first practice victory and his first driving victory were both special but felt a little different. He noted that with the win in practice, he knew he had it by watching the horse come down the stretch. In the victory at the wheel, there was another shot of adrenaline.

“Just knowing that a horse I was training had a good trip and I was there on the bike behind her, it was a good feeling,” he said.

Shortly after, he won his second victory with Fiesty Sam, a horse bred by his grandfather. And that in itself made him special, as Marvin Brown brought Matt into the business and guided him every step of the way.

“He always comes to the races and gives me pointers on something I should try or change on a horse,” Matt said. “He was always involved with the trotters, that’s all I did. He pushed me to stay with the trotters. He taught me most of what I know. 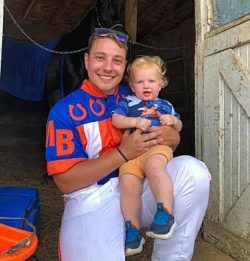 Matt Brown has been driving and training horses since 2017. Facebook photo.

“The last few years I’ve been on my own, I live an hour and a half away from him now so I don’t see him most of the time. I learned a few other things from the local coaches at Mount Vernon. But he always comes to the races and gives me advice and criticism. He likes it. I do it more for him. He can’t take it anymore.”

The reason for this is that, while trying to break in a yearling 10 years ago, the horse got away from him and Marvin suffered an accident that nearly cost him his life. He walked away from it at that point, which Matt was forced to accept.

“I was quite upset but I completely understood where he was coming from,” said Brown, who was attending Hocking College at the time. “I didn’t want him to play with the horses without me anyway, just because I knew what his condition was and didn’t want anything to happen again.”

Marvin was a crane operator and got into harness racing in his thirties. He had trained quite a few horses for himself and other owners and got into the business before Matt was born. Matt’s dad is a truck driver, so his schedule doesn’t leave him time for horses, but when Matt was in seventh grade, Marvin bought trotters and got his grandson interested.

“I kind of started going to work for him, I started jogging the horses for him,” the longtime Ohio resident said. “I would go to the race tracks with him, he would race at Northfield and Scioto and ride the Signature Series at county fairs. I worked with him through high school and into early college.

While Matt’s parents had no problem with his interest in the Standardbreds, they had one firm stipulation.

“My family pushed me to go to university and find a good full-time job first; at least prepare myself with a degree and stuff before I think too much (about harness racing),” he said. “My parents still support me today. They try to go to all the races they can. If they’re not there in person, they watch it on the computer. They’re very supportive of me.”

And their insistence on college paid off, as Brown now has a full-time job as a bailiff for Licking County Domestic Relations. While that might not sound as glamorous as being an undercover cop on a stakeout, it beats working nights and weekends.

“I wanted to be a policeman before I went to college,” he said. “After graduating, I got a job as a police officer in the Granville gendarmerie. From there, I decided I liked the ushers schedule better, just Monday through Friday.

So, he got a job in the courtroom that now supports his wife and son, and the daughter his wife is expecting soon.

He took a break from the stables for a time during college and after graduation, but began to realize how much he missed the sport. Three years ago, shortly after his wedding, Matt and Marvin each bought half of a 2-year-old colt, The Disciple.

“I trained him at the Delaware County Fair,” Brown said. “At that time (Marvin) came out all the time and he helped me get started that way. We just raced him at fairs. That colt was a great learning experience for me.

“My grandfather used to hang out with me almost every day in Delaware. We raced it that summer and that’s when I fell in love with it again, having that experience with it. I knew I had to buy a few more horses.

So, he bought Winning Misty and Fiesty Sam. He coaches and coaches them both, and also coaches Bravo Team. He bought Winning Amber last year, but the filly never trained as he had hoped, so she was sold.

Despite the security of a full-time job, the idea of ​​turning to harness racing for a living still dances in Matt’s mind.

“I guess it depends,” he said. “I know Ohio is really strong right now with their running program. If the right opportunities presented themselves, I could look elsewhere and do it full time. I really acquired a love for it. It’s something I want to keep improving every year.