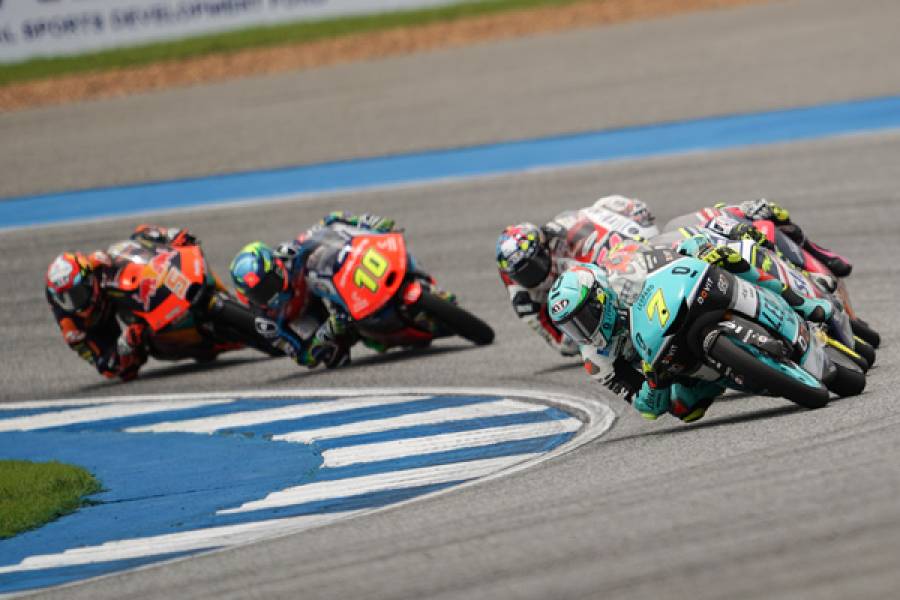 The Chang International Circuit features two long straights, so the theory was that the wake effect would make it difficult for anyone to get clear of the peloton. Foggia and his NSF250RW quickly laughed at this theory! From the third pole position of his career, he took the initiative in the opening stages, eventually crossing the line 1.524 seconds ahead of his closest rival.

Foggia’s tenth Moto3 victory makes him the third most successful Moto3 winner, tied with Alex Rins. Only Romano Fenati (13 wins) and Joan Mir (11) have won more races in the category, introduced in 2012.

Foggia still has a chance to clinch the title. Championship leader Izan Guevara finished fifth today, separating them by 49 points with three races to go and 75 points still at stake.

The 21-year-old Italian was joined on the podium by fellow 20-year-old Riccardo Rossi (SIC 58 Squadra Corse Honda NSF250RW) who battled for the podium places, pushing runner-up Ayumu Sasaki to the very end, when he attempted a brave pass at the final turn, only to run wide. Nonetheless, third place was Rossi’s first podium appearance of the year and second of his career.

Grand Prix rookie Mario Suryo Aji (Honda Team Asia Honda NSF250RW) showed great promise today, but couldn’t do better than a 21st place finish. The 18-year-old Indonesian was in contention for 18th place throughout, missing the position by three tenths of a second.

Disappointment for talented rookie Taiyo Furusato (Honda Team Asia Honda NSF250RW). The 17-year-old from Kanoya was on course to score points for the second race in a row after securing his best grid position yesterday. But he was caught up in a messy crash on the first lap when he was hit by another bike, which damaged his own machine. He stopped for repairs and finished the race valiantly in 25th position, albeit three laps down.

After an intense period of three races in as many weekends, Moto3 teams and riders have a free weekend ahead of back-to-back races at the Australian and Malaysian GPs on October 16 and 23.