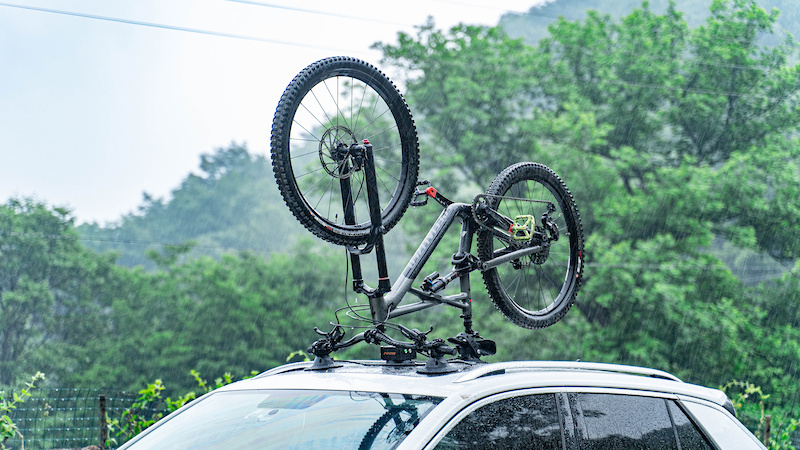 After the release of the world’s first electric suction cup bike rack (N-Power) last year, Fovno is now launching a brand new inverted design, the ES-H1B. The rack will be on display at this year’s Eurobike on July 13 (A23, Hall 9.1). This new design will cost US$295.

The inverted rack uses three suction cups; the front two connect to either side of your bike’s handlebars, while the rear mounts to the saddle. This three-pronged structure, coupled with the N-Power electric control box and alarm system, is extremely stable and secure.

Unlike traditional suction cup roof racks that require you to remove the front wheel, the ES-H1B’s inverted design is simple and convenient. There is no need to remove anything before mounting your bike.

The heart of the ES-H1B inverted rack is the N-Power control box, which weighs 650 grams. The control box features a power button which, when pressed, instantly raises the suction cups to your roof with electronically controlled pneumatic suction. The control box uses a 3400mAh lithium battery and a Type-C charging port, allowing extremely fast charging. The system has an IP65 waterproof rating and will automatically close the suction cups in the event of pressure loss.

Before installing the reverse rack, wipe down your car roof first. Then just place the suction cups on the roof and press the power button on the control box to make sure the pneumatic system is working properly. Place the alarm inside your car and connect it to the center console USB port. Then, voluntarily break the seal of one of the suction cups; if the system is working properly and ready for use, the alarm will sound and the control box will automatically close the leak.

With your bike inverted onto the roof (remember to avoid placing the suction cups on the sunroof window seals or other uneven areas), attach the hoses to the control box and press the button. ‘feed. In an instant, the three suction cups attach securely to the roof of the car.

Fovno will also soon release an expansion package for this model which can mount multiple bikes.

If you’re going to Eurobike this year, stop by and check out the new ES-H1B!