Furor over cavalcade of ‘rabble kook scum’ on e-bikes at site of world surfing title showdown in California mounts as petition circulates for their permanent removal, “It’s getting out of control and no one’s talking!” 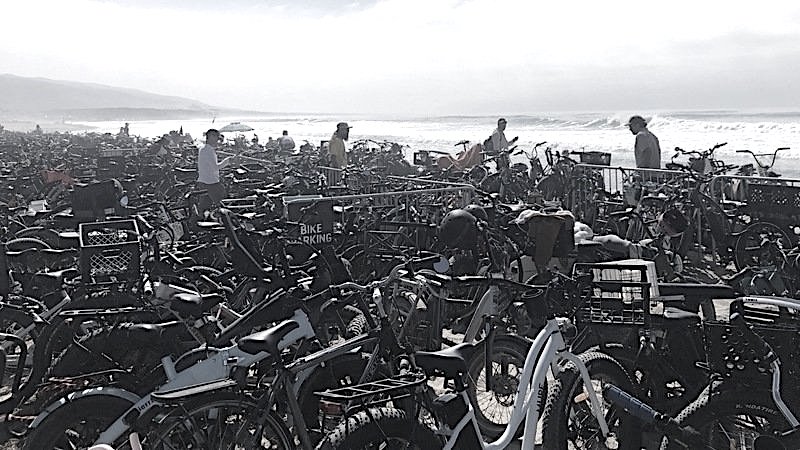 Furor over cavalcade of ‘rabble kook scum’ on e-bikes at site of world surfing title showdown in California mounts as petition circulates for their permanent removal, “It’s getting out of control and no one’s talking!”

Put the “master” back in Pipeline!

The World Surfing League has been on a heavy, heavy push of equality over the past few years and, like it or not, somewhat admirably. Trying to level a playing field that has been tilted forever. Women don’t get vaccinated. The women are blamed for not being shot and then not performing when the bone is thrown or being thrown a fake bone called “true” (where WSL notably fails). Women asked to do better with a fraction of the resources to go, show up to the waves of criticism, hire nutritionists, massage therapists, trainers, etc.

Vans, owned by VF and raking in a billion dollars a year, has extra stripes, but seems to prefer posture and simulation, performance, to really make a difference.

Either way, and on the same theme, the canvas shoe juggernaut has teamed up with premium surf magazine Stab to reinvent the months-long Pipeline Masters. As you may recall, the world’s premier surfing event is no longer part of the World Surf League. In great wisdom, Pipeline now hosts the first event of the year albeit not the ‘masters’ but rather the ‘pros’ with Lower Trestles becoming the crown jewel.

New can be so wonderful and the new Pipeline Masters is set to be a progressive airshow with new judging criteria, a selection process, more venues, 40 invited men across time, space, history and… only 20 women.

Not even the unadjusted female average annual salary of about 80% of the male average salary.

A very public and aggressive roll back of the equality clock.

The definition of tokenization.

Protests erupt in the streets.

But are you there with a sign or just excited for a reinvented Master?