Gravel racing: a challenge for body and mind 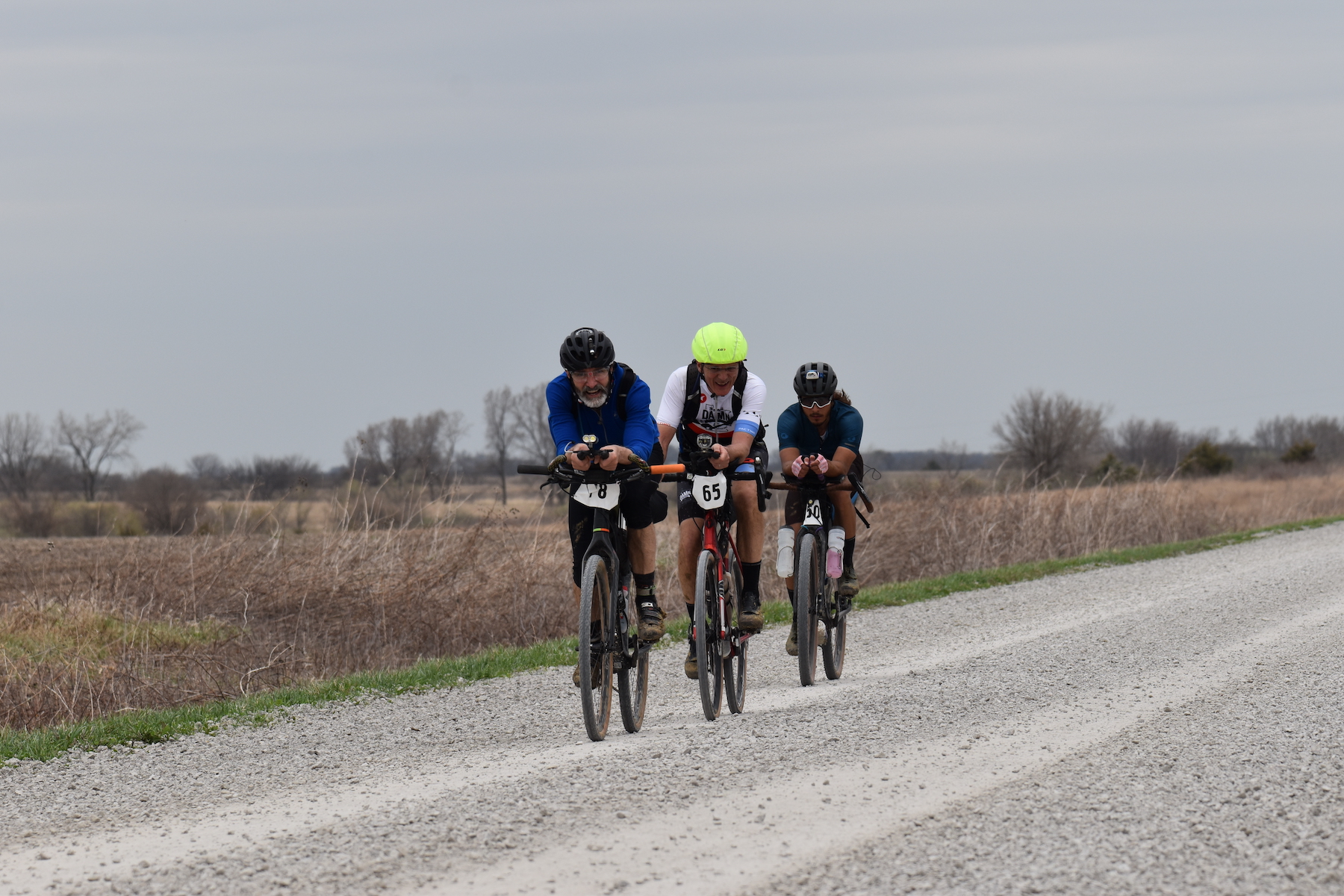 Gravel racing: a challenge for body and mind

The Midwest is generally not known for setting global trends.

In the biking world, however, the Midwest is the epicenter of the fastest growing segment of biking: gravel riding.

With the thousands of miles of uncrowded rural gravel roads in the area, this is a natural, local cycling evolution. One can ride safely and serenely for hours through the countryside, admiring the sights, smells and sounds without ever seeing a car.

As humans are inclined to do, “gripping” competitions have developed to test speed and endurance. Almost every weekend a cyclist can find an event to attend.

The Iowa Wind and Rock Race (IAWAR) is the pinnacle of endurance gravel crushing. He comes out of Winterset, Iowa, on a weekend in mid-April. This year, it happened on April 23 and 24.

This is the toughest early-season ultra-gravel race in the United States. It covers about 340 miles (about the width of Iowa) of gravel hills, typically with 29,000 feet of climbing (the height of Mount Everest).

The course is secret and changes every year. It is navigated only by map markers (eg, “Mile 169 – Turn right at 340th Ave”). It is self-contained, no outside help is allowed, and you must take all your supplies with you or buy them from one of the few outlets along the way. You must average at least 10 mph to finish within the 34 hour time limit.

There are two checkpoints. You start with a set of cue cards, and if you make the checkpoint, you get the next set of cards so you can continue. If you don’t make the cut, you can call for route extraction or return to start.

This year, 53 runners from as far away as Alaska and Florida participated. The peloton was down from the normal cap of 125 riders. The weather was expected to be particularly awful, so many runners decided to sleep in: winds were forecast at 25-30 mph with gusts of 50 mph and thunderstorms all day.

The year of wind and rain

I have participated in this race each of its four years. I missed a checkpoint by five minutes the first year and hitchhiked 50 miles to Winterset; there were six finishers.

The following year was extremely cold. Being from Minnesota and used to the cold, I was fine, but the cold killed my electronics. I spent a lot of time looking for batteries to charge my odometer so I could follow the clues. There was a finisher. I arrived well after the cut as an unofficial finisher.

Last year my bike derailleur broke on one of Iowa’s infamous Grade B back roads. I had an early exit at mile 45.

This year was my year.

I had set myself the goal of finishing this beast in the allotted time. Since November, I had been training daily, doing hundreds of hours and thousands of miles.

Anticipating the wind, I did my best to be “aero” to ease the effort. I was wearing my tightest clothes, nothing beat. I wore a helmet cover to close up the watt-sucking vent holes. My tires have been carefully selected for minimum rolling resistance and air resistance.

We left Winterset at 4am. The wind was already howling. I was riding with my buddy, Rob. Last year, sleep deprivation and fatigue rattled him. he got lost and had to abandon the trip. He and I had a pact to work together to break the wind and keep us awake and on track.

The wind only got worse after sunrise. Either we headed there or the crosswind blew our bikes under us. At one point, on sketchy gravel, I found myself thrown down the road dangerously close to the ditch.

Two hours before the cutoff, we arrived at checkpoint 1 at mile 92 in the town of Russell, Iowa. Optimism abounded. After a quick refueling at the local convenience store aptly named Last Chance, we continued on our way.

Still, we worked our way across the field. A lot of riders started too fast, and it was satisfying to chase them down as the fatigue took its toll. We took a third rider, Leonardo from Brazil, who now lives in Colorado, and he made our riding into the wind even lighter.

We quickly descended into Missouri and drove six miles of B-grade back roads before returning to Iowa.

One thing about racing in Iowa that is relatively unique is the use of B-level secondary roads. These are dirt roads with no gravel; essentially, tractor paths. On a good day they are deeply rutted and barely passable. On bad days, they’re full of mud that sticks to tires, jams transmissions, and has to be ridden. Luckily the Missouri section was mostly passable except for about a mile. Otherwise, our two hours of cut-off margin at the checkpoint would have been consumed.

Waiting for the storm

We had a tailwind and mostly blew up to Corydon, Iowa to checkpoint 2 at mile 170. We got our set of marker maps for the last 170 miles and left to refuel at the convenience store by Casey.

The local sheriff had instructed Casey’s cashier to advise us that tornadoes from thunderstorms were expected to arrive in the area within the next few hours after sunset. Considering the atmospheric energy driving the wind, it seemed like the icing on the cake for the day.

It started to get dark. We chose to take our chances with the storm, hoping we could make our way safely.

We drove west towards ominous dark clouds. The rain started slowly, just a pinch. The wind has calmed down a bit. Perhaps the danger was exaggerated.

This optimism was soon dashed. The wind picked up even more. The rain was horizontal, directed straight at us, stinging the face.

The lightning that started in the distance was now all around us. A lock knocked a few hundred yards away, drawing our attention. We all wanted to finish this race more than anything, but we didn’t want to die. It was time to find shelter.

It wasn’t long before we spotted a barn near the road. We rolled around wet. Others had made a similar choice and crowded into the dark recesses between the machines and the horse boxes. We stayed silent with the lights dimmed, hoping the farmer wouldn’t be alarmed and chase us with a shotgun.

The storm took its time to pass. Our two-hour margin was gone. We were now about 30 minutes late. We left the barn around 12:30 p.m.

Unfortunately the strong wind had shifted and was now out of the northwest – just the direction we were headed. The roads were slow and muddy.

Skidding to a stop

I was pedaling hard against the wind when suddenly a rock jumped off and got stuck in my derailleur. Before I could stop pedaling, I heard the sickening sound of metal being ripped from metal. My rear wheel locked up in a split second when the derailleur fell into the spokes, and I came to a skid stop. The runners behind me swerved but remained upright.

I quickly assessed the situation. The mangled derailleur was tangled in the spokes. The chain was wrapped around the axle and bent in several places; there was no way to shorten it to assemble a single speed. Unfortunately, I have experience in this area since last year.

My run ended at mile 192. I had a signal bar on my phone. I texted the race directors about my status and said goodbye to the others. Rob’s friend Laura had graciously agreed to be part of the extraction team. She got my call around 1:30 a.m., about 70 miles away.

I started walking along the pickup road to warm up and enjoy the spectacular night sky after the storm with the sounds of coyotes howling in the distance.

By the time Laura arrived, I had accepted my misfortune. After all, I’m 67; I’m beyond lucky to have the circumstances and the health to ride at this level, let alone ride in the presence of all these superb athletes.

In the end, six sturdy souls made it through the night to end up in Winterset before the 34 hours were up. Equally admirably, three others, knowing they wouldn’t make the cut off, persisted in finishing unofficially a few hours later.

I should mention that the unicorn is the breed’s mascot. This probably originated from the idea that one might see a vision of a unicorn in a time of deep fatigue. This year, the course has roughly formed a unicorn outline.

A challenge is not a challenge if the result is a certain thing. Maybe next year will be my unicorn year.

About the Author: John Jarvis moved to Eden Prairie 24 years ago with his wife, Kathy, and five children. An expatriate position in Ireland had ended, and Detector Electronics of Bloomington, where he still works, had a need.

John has been an avid cyclist since before the first OPEC oil embargo. When John arrived in Minnesota in January 1998, it was in the middle of a clipper from Alberta, and the temperature was 20 below zero. He thought his cycling days were over. He didn’t know the area was a hotbed for cycling. Although summer cycling is amazing, he has since learned about winter and year-round cycling.

Besides commuting, John likes to test himself on the bike. He describes himself as “mainly a transport cyclist but with masochistic tendencies”. Last summer he rode the 1,200 mile Trans Mni Sota Wheel Race through Minnesota and the 630 mile North Star Bicycle Race from St. Paul to Canada and back.

Subscribe to get EPLN delivered to your inbox for FREE!