‘It’s like my natural high’: This young cyclist is turning heads in Gainesville 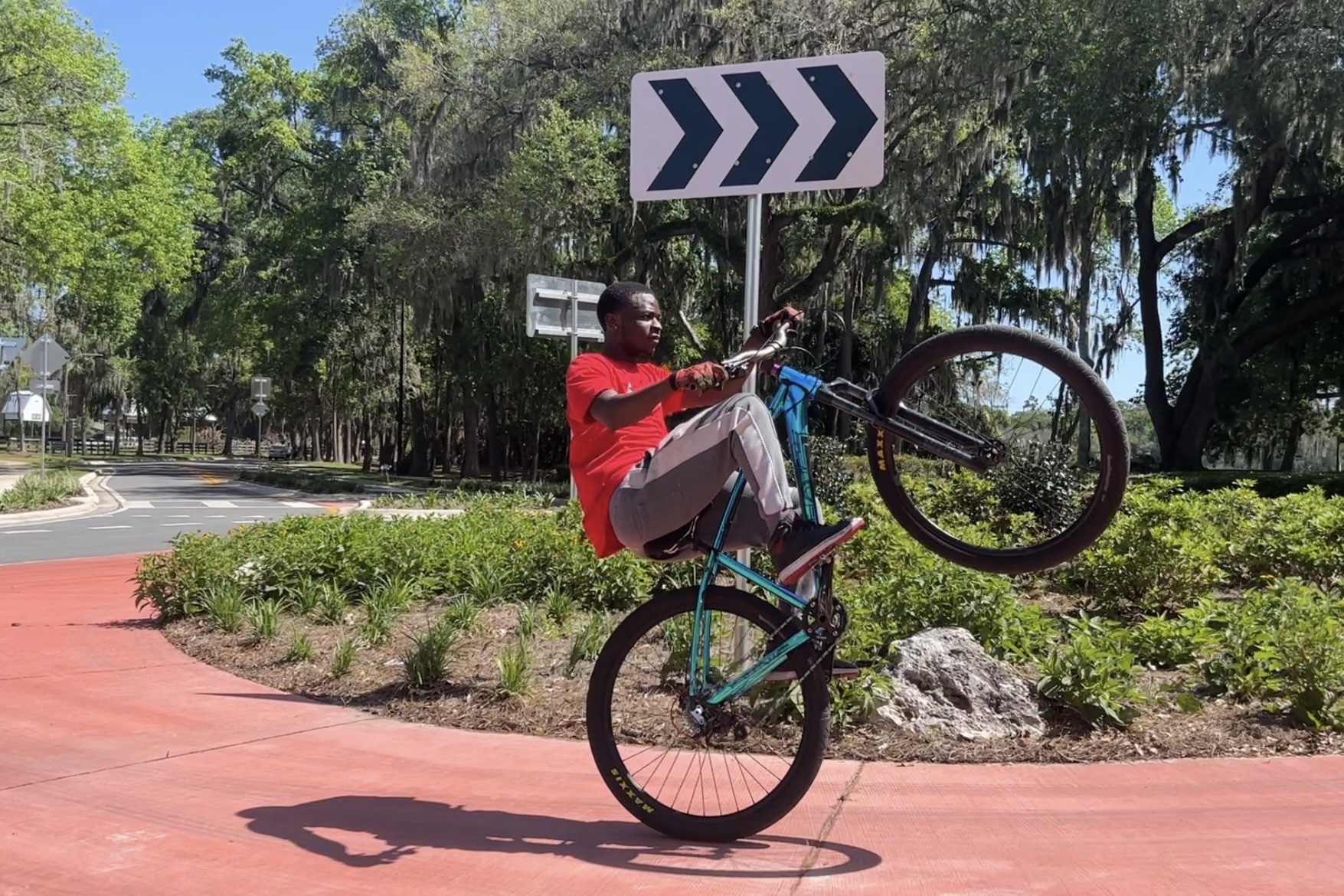 ‘It’s like my natural high’: This young cyclist is turning heads in Gainesville

Hours into his night shift at a warehouse in Alachua, Kendrick McGlon rolls out of bed to join his friends in doing BMX-style bike tricks through the streets of Gainesville.

McGlon is part of “One Wheel,” a group of 15 to 24-year-olds also known locally as the “Wheelie Boys,” among other nicknames. Whether on University Avenue or Depot Park, he likes to make people smile when he rides alongside them with one wheel above the ground, or stands on his bike as he cruises at high speeds. speed, a trick he calls “surfing”.

Since the age of around 6, McGlon has been fascinated by disassembly and reassembly. It started with miniature cars, then bikes as they got older, realigning brakes or fixing a flat inner tube. He said almost everything he knows he learned by trial and error.

It wasn’t until 2015 that McGlon learned to ride. He said it took him a few months to master controlling a bike, and from there the tricks followed. His favorite is the “death spin”, in which he spins on the rear wheel of his bicycle while the front wheel remains above the ground. He said for others it takes a few years just to do a wheelie.

“My footwork, my balance – everything – it’s a little above average,” he said.

His athleticism is not only due to innate talent. The Santa Fe high school graduate played soccer in elementary school and ran track and field throughout high school, competing in events such as the men’s 100m and 200m dashes. He said he even made the varsity football team his senior year, although he didn’t play this season because it would have interfered with athleticism.

In addition to sports, McGlon said he was an honors and AP student. Despite a 3.4 GPA, he said school just wasn’t for him, so he started working on his high school diploma.

When the Wheelie Boys ride together, they can end up all the way to Trenton, Williston or Alachua, said biker Mizel Clark, 19, who started hanging out with McGlon about five years ago after moving with his family to East Gainesville. Clark said they butted heads at first, but their bond grew quickly as he learned to ride and do other tricks alongside McGlon.

McGlon acknowledges that his style of biking can be dangerous, but he says he is “one of the safest you know” to do it. He said he remains aware of the people and vehicles around him and can often tell what a car is about to do by listening to the engine and/or reading the driver’s expression at through the window. If he’s listening to music, he’ll make sure it’s not turned up loud, so he can hear what’s going on around him.

But while McGlon said he was only injured while riding due to his own mishaps, his friend was not so lucky. Clark said he had been hit by four cars since he started driving. The worst injury: a fractured ankle after an accident in the Duval Heights neighborhood in 2018.

“I passed out in midair,” Clark said. “I landed like Superman.”

Given the multiple pedestrian fatalities that have occurred on University Avenue and other streets in Gainesville in recent years, the safety of drivers, cyclists and pedestrians is a top priority for the Gainesville Police Department, said the Public Information Officer Graham Glover.

But while this style of bike has been brought to GPD’s attention by city residents in the past, Glover said it’s not among his biggest road safety concerns.

Michael Auer, 28, a lawyer, said he started noticing young people doing wheelies and other bike tricks, mostly between downtown and downtown, almost as soon as he moved in northeast Gainesville in 2016.

The possible legal implications of this nature of cycling are ever present. A case in which a car hits one of those drivers, or frantically tries to avoid hitting one, could result in civil liability and, at worst, even a manslaughter charge, Auer said.

As a motorcyclist, Auer also said an overriding concern was that he had never seen any of the Wheelie Boys wearing helmets. At the same time, said the lawyer, such a hobby can be beneficial when it allows young people to be entertained and stay out of trouble.

Michael Harmon, 31, of northwest Gainesville, also noticed One Wheel cyclists riding their bikes near the University of Florida campus, in downtown Gainesville and at Depot Park. Harmon described the stunts as an “eye-catcher” that could cause a distraction down the road. But he also praised the dexterity of the bikers and noted his astonishment when he saw them.

“To have that kind of control and balance over your body coordination and all that, I think there’s something to be said for that,” said marketing and advertising consultant Harmon.

In addition to riding with other members of the One Wheel group, McGlon also frequents the Tour De Gainesville, a community “group ride” founded in October 2021 that invites people on “all wheels” to participate in a 7 to 9 miles around town.

Camila Lim-Hing, 22, is a full-time ceramist who moved from Orlando to Gainesville in August, largely because of the small town’s “bike friendliness.” After hearing about the Tour De Gainesville idea from friends, Lim-Hing offered to help and is now creating the flyers and social media captions promoting the rides.

Lim-Hing said McGlon showed up at several Tour De Gainesville rides, both with other One Wheel crew members and alone. She said that when he shows up, the ride becomes a party, both for those taking the route and for the spectators.

“With K and his band, it’s definitely more of a show than just a bunch of runners,” Lim-Hing said. “It’s like, here’s a circus; here is a representation.

Martin Cox, owner of Super Cool Bike Shop on West University Avenue, stopped McGlon on his bike a few years ago when Cox noticed that the bikes used by the band weren’t of good quality. Cox said he watched McGlon grow as a rider and tried to support him by supplying him with parts and helping with issues such as broken rear brakes, a common rear wheel problem.

McGlon’s ideal future is to quit his job and open his own bike shop, where he could sell his own bike or brand of bikes. While conceding it may be “far-fetched,” he has already brainstormed a name – “K2” – and drawn bike frame designs on his iPad.

“At this point, I’m a professional who just isn’t paid yet,” he said.