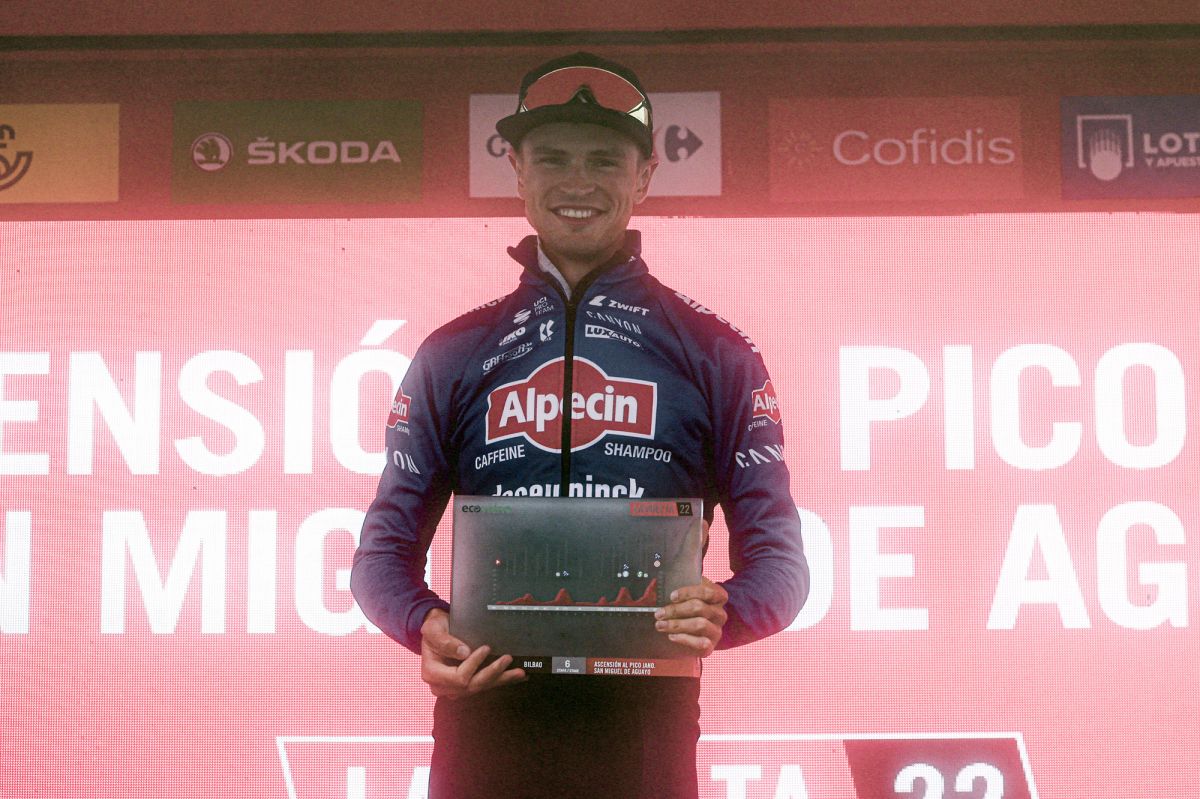 It wasn’t Jay Vine’s kind of weather, but it was definitely his kind of day. The Australian had aimed for the Pico Jano climb before the start of this Vuelta a España, and the climb turned out to be as manageable in reality as it had appeared in the road book.

Vine earned his way into the pro peloton by racing his turbo trainer to win an online competition, but there were no comforts at home on Stage 6 of the Vuelta, played on a mountainside doused with rain and shrouded in low cloud. His first victory as a professional was won the hard way and under the most difficult of circumstances.

“I always use Zwift to get ready for races, because I’m a little soft,” Vine joked as he got into the press conference truck afterwards. “If the weather was like this when I was at home in Andorra, I wouldn’t have driven outside. I always use Zwift to prepare for important events, especially because in rainy weather you can’t predict what other road users will do. But a lot of my training is done on the road, because fortunately the weather is very nice in Andorra.

While Vine’s remarkable power-to-weight ratio won him his first professional contract in early 2021, his performances on the road last season earned him a renewal from Alpecin-Deceuninck. And although the team is built around the talents of men like Mathieu van der Poel and Jasper Philipsen, the 26-year-old has carved out a place for himself in the Belgium squad.

“The team is very focused on sprints and classics, that’s pretty obvious because we have some of the best classics riders on the planet,” Vine said. “But we had three guys in the lead group today, and they were able to get me into the base of the climb.”

On his Vuelta debut a year ago, Vine caught the eye with a fine third-place finish atop Pico Villuercas and he was sent into this year’s race aiming for a victory at the top. In the early days of this Vuelta he had deliberately shipped time in the general classification in an attempt to infiltrate the breakaways, but he missed the opening shot of stage 6 and was instead doomed to win the hard way. , attacking from the group of favorites.

“It’s almost unreal. I had a puncture in the first 5km and missed the first break, although it was always the team’s plan for me to go there on the final climb if it all came back together,” said Vine, who attacked from the group of favorites at the base of the 12.6km route to the finish before catching and passing solitary leader Mark Padun (EF Education-EasyPost) halfway up the ascent .

“To be able to do this from the GC group is amazing, but I’ve been working towards this all year. I knew Padun was still on the road, and I knew that if I wanted to close the gap, I had to go a It was luck – well, not exactly luck, because it was planned – but I was 13 minutes behind GC, so no one would care if I went. I was able to pace the climb quite easily.

Vine’s description does a disservice to the breadth of its display. Although he was able to escape the red jersey group with no reaction at the foot of Pico Jano, he had to fend off a fierce chase from Remco Evenepoel (QuickStep-AlphaVinyl) most of the time after the Belgian launched his own onslaught. with 9 km remaining.

When Vine caught and passed Padun with just over 6km to go, for example, he edged Evenepoel and Enric Mas (Movistar) by 20 seconds, and he kept 15 seconds of that buffer at the top. For reference, men like defending champion Primoz Roglic (Jumbo-Visma) and Jai Hindley (Bora-Hansgrohe) were 50 seconds behind with 6km to go, but their deficit would swell to 1:37 at the finish .

“It was supposed to happen last year, but accidents happen,” Vine said of her first pro win. “It’s even more special because I’ve been so close so many times this year alone. And I’ve basically been working all year preparing for this event. My wife doesn’t work, she supports me full time, so at home, every day is a training camp for her and me.

“In the last meters, I was thinking of several things. I thought it was for my wife, who has done everything for me for the last three or four years to get this point. And I also thought, I guess it’s time for me to get a Corvette.

It has, by any measure, been an amazing journey for Vine over the past three years. At the start of 2020, he hoped that fifth place in the Herald Sun Tour could open up opportunities to move from the Nero Continental team to the European race. Instead, the coronavirus pandemic has threatened to sever the prospect at the bud. “The only path I had left was to take Zwift Academy to get that spot on my team,” Vine said. The future was then virtual. The present should barely feel real now.