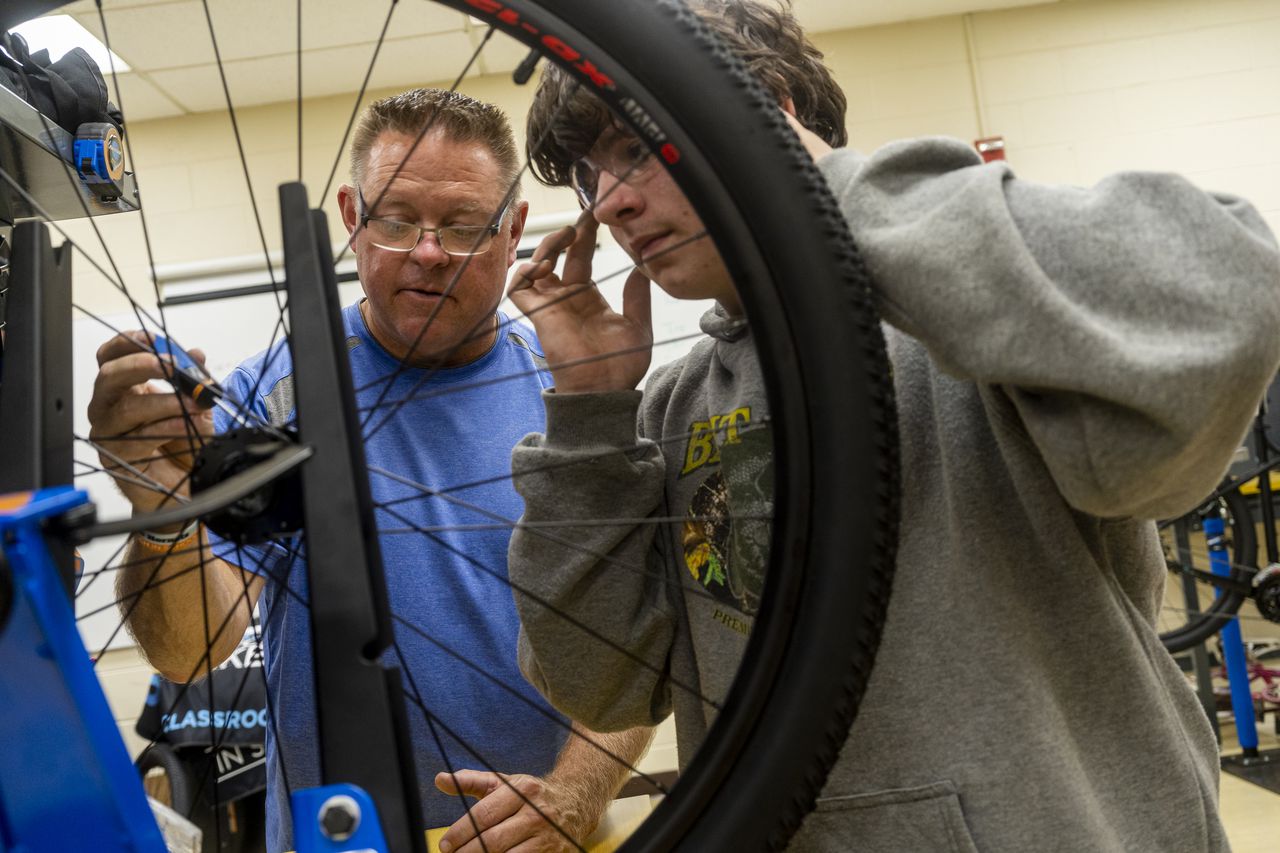 Bike Tech instructor Jack Linn received so many bicycle donations from all over Genesee County that he eventually ran out of space to store them.

Linn had posted on Facebook about the launch of a new program at Kearsley High that would introduce students to trades through bicycle mechanics.

The 26th grade Kearsley teacher said hundreds of people had contacted him to donate bikes for the students to work on.

Linn’s colleague, Jason Titsworth, had worked to come up with the new program called Project Bike Tech that would use bicycle mechanics to teach STEM subjects.

The Kearsley School Board approved and adopted the new program, which costs $60,000 to start, last summer. The first program of its kind at Kearsley High School is also the first Bike Tech class in Michigan.

Stationed in a lab at Kearsley High School, the bike tech class includes 10 workbenches, bike racks, new Haro bikes, and a semester-long curriculum from which the core courses begin.

In its first year, the program has about 40 participating students, but Linn expects that number to grow in the coming years. Upon adoption by the Board of Education, a four-year commitment to the program was made.

Students in this class can gain hands-on experience with bicycle mechanics. During the MLive-The Flint Journal visit on October 12, the students were performing the disassembly and reassembly of the hub.

Mason Willetts, a senior at Kearsley High School, was working on his own bike with his partner Adam Ward, a sophomore.

“I’m a hands-on learner, so I’d rather be able to work on things than learn about them,” Willetts said. “Being able to learn more about hubs and headers and everything. It’s just a lot more fun. What class do you have to ride bikes and learn about bikes?”

Ward always wanted to become an auto mechanic one day, so the hands-on experience of working with tools and assembly piqued his interest.

“You get to know the tools and how to fix a bike. … It’s probably one of my favorite classes because you can actually do stuff,” Ward said.

Working with Project Bike Tech, Linn and Titsworth traveled to Colorado over the summer to learn the program, experiment with bikes and develop their own techniques for the class.

It’s a refreshing change of pace for a teacher who has normally taught core subjects. Linn said this course even encouraged him to consider extending his teaching career, as the students have fun while they learn.

“I see children learning and having fun. I taught for 26 years and during that time – social studies and English classes, you know, kids always say ‘it’s boring’ and ‘I don’t need to know that’,” said Linn said. “It’s just a stepping stone opportunity (to get into tech jobs). They’ve been really receptive.”

The class is organized with a mixture of lectures and practical workdays. There are currently two class sessions: one with 19 students and another with 18.

At the start of the semester, students write a one-page paper and give a presentation on how job skills can help them in the future.

Towards the end of the course, students will learn more career development skills such as owning a business, teamwork, interview tactics, and more.

At the end of the semester, Kearsley High School’s Bike Tech will donate all repaired bikes to the community through the district’s Christmas charity program. Linn expects to donate 60 to 70 bikes in the first year.

“It feels good that the kids are enjoying what they’re doing,” Linn said. “They are going to get involved in the community. They put something together and learn to give.

Read more on The Flint Journal: