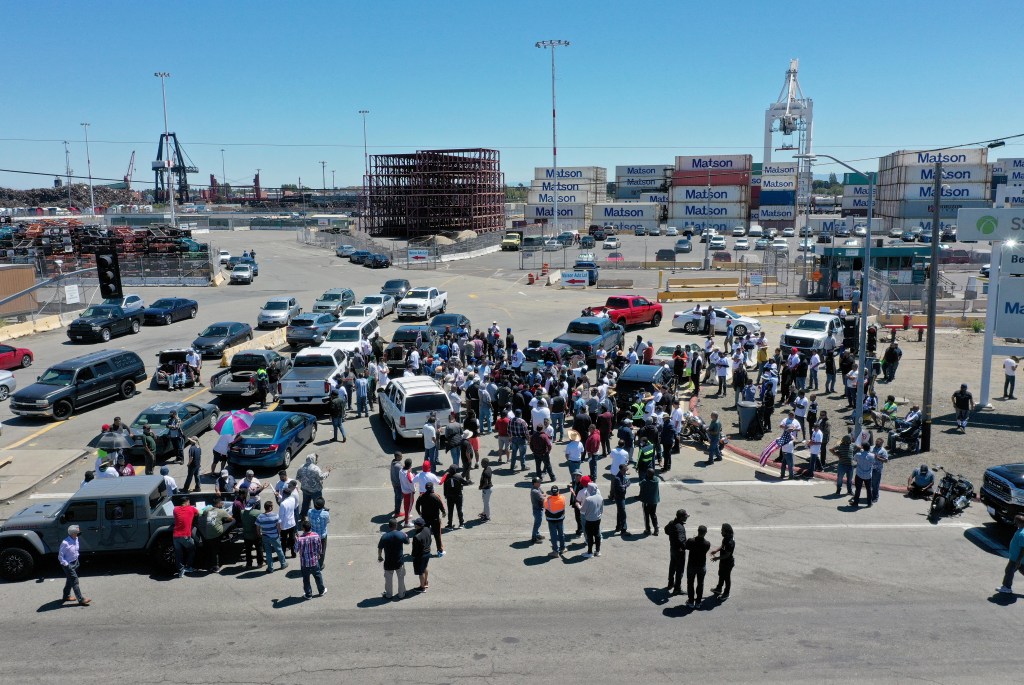 Submit your letter to the editor via this form. Read more Letters to the Editor.

All of your reporting on the truckers’ protest casts the issue as “AB 5 could end its business model”. Stop playing softball and tell it like it is.

This model is the owner-operator, the most prevalent and vital business model in our daily lives. Suppose the state suddenly tells a family grocery store that it has to work for a chain or close its doors? This “would put an end to their business model”. Readers would call this reprehensible; so what about truckers?

Independent truckers mortgage their homes and spend hundreds of thousands of dollars to fulfill their dream. But unions give politicians millions of dollars, so if they want to upend people’s lives so they can raise their dues, the legislature and the governor follow them.

Labor unions, teachers’ unions, almond growers – donate, and the politicians are yours. The Times should give truckers a break and push Sacramento to exempt them; It’s only justice.

You may know me. I am one of many people who are discriminated against. Although my numbers are many, some say a majority, I am treated as less than – compared to others.

I am not allowed in places where my neighbors are allowed. I am denied resources — because I am different. I am treated like a third class citizen. Many see me as a nuisance. Some would like to see me banned from everywhere, even from the few places I am allowed to go today.

Almost everywhere else in California, I have equal access and am allowed to have fun – my way. Not at Walnut Creek. In Walnut Creek, I am marginalized, fearing for my safety due to poorly maintained resources and other man-made conflicts. Some tolerate me, others despise me. Few make room for me. I’m the lowest form of recreating Walnut Creek.

I am a mountain biker.

Electric vehicles
have a silent defect

My wife and I own an electric car. It’s fast, fun to drive and of course very cheap to run considering today’s gas prices.

However, there is a significant downside. It’s very quiet and pedestrians often don’t hear us coming, especially if they’re deep in their phones or wearing headphones. Our neighborhood has little traffic and often people walk in the center of the road. We don’t want to warn them by blowing our horn and knocking them out of their shoes, so I think electric cars need a different signal.

How about a bicycle bell sound? Everyone knows what it is and they usually get out of the way. The “bell” should be louder than that of a bicycle, but it would overpower the sound of an ambulance siren.

Moraga does his part
preserve the monarchs

On July 21, the International Union for Conservation of Nature declared the monarch butterfly an endangered species. For years, conservationists, scientists and monarch lovers have urged the EPA to make a similar statement, but the EPA has not, citing other more critically endangered species.

Recognizing the catastrophic 99.9% decline in the Western Monarch population, in January 2021 the Moraga Garden Club began construction of a 2,600 square foot monarch habitat at Rancho Laguna Park in Moraga, completed in June 2021. The park, which has many milkweeds and beautiful nectar plants, educational signage and a 6-foot metal sculpture of a monarch butterfly, was donated to the city on June 5, 2022.

Although no monarchs have been seen in the park before, there is now at least one egg-laying pair in this beautiful joint venture of certified monarchs. Come to Moraga and see what community effort can do.

“Will More School Money Improve California’s School Outcomes” by Dan Walter should be required reading for California lawmakers who are now sending emails boasting about allocating more money to schools.

There is no mention of responsibility to confirm the actual results or any guarantee that the money will not be diverted to non-educational purposes as has been the case in the past.

Spending money without any accountability is easy but irresponsible governance. We should expect better.

The Congress must expand,
rebalance the Supreme Court

I am furious and deeply concerned that our Supreme Court in the United States is systematically dismantling our democracy. It’s bad enough that they stripped the bodily autonomy of tens of millions of people, blocked states from passing common sense gun laws, and gutted the EPA. Then they announced they would take up a case that could give state legislatures the ability to decide election results.

These are fundamental attacks on our government. Congress needs to do something, quickly, while it still can. We are in a constitutional crisis.

Democrats must expand and rebalance the Supreme Court and fill all federal judicial vacancies with pro-democracy, pro-choice, and pro-environment justices.

We also need to pass the Climate Reconciliation Bill immediately because we lack the means to protect our children from the climate emergency.