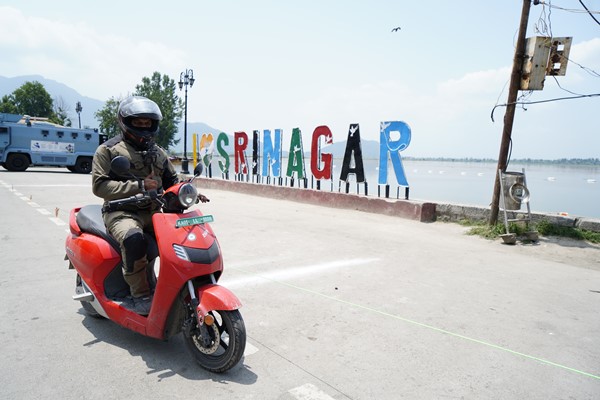 In fact, it’s only been in recent years that more and more two-wheeler enthusiasts are taking such adventurous motorcycle rides. Also, these rides have become a bit more common after various motorcycle clubs/groups started organizing rides.

Additionally, Royal Enfield can also be partly credited with bringing the ‘Ride to the Himalayas’ craze to the Indian two-wheeler community. The manufacturer even has a motorcycle named after the Himalayan mountain range.

However, the feat achieved by Girish Shet (a vlogger and motorcycle enthusiast from Mangalore) is no ordinary given that he used an electric scooter for the K2K ride. In fact, his feat of riding an electric scooter from Kanyakumari to Kashmir or even from Kanyakumari to Khardung-La might be the first in India, and Girish asked for verification and confirmation to enter “India Book of Records”. “.

Speaking of ‘Ruby’, Girish said he tried to smash the electric scooter but it didn’t work.

“I’ve been off-roading, climbing rocky mountains, riding rocky, sandy roads, but the scooter has no complaints. I think it outdid itself when it got me through a sandstorm on my way from Kargil to Leh”he added.

To support this trip, Bounce had given Girish five extra replaceable batteries to make the trip a bit more convenient as each battery would only last 70 km before recharging. With these extra batteries, Girish could travel about 250 km per day and charge the batteries while resting at night.

On the entire journey, the Bounce Infinity E1 electric scooter and Girish traveled 4,340 km through 11 states. For this, it took 83 battery exchanges and 19 days to complete the entire trip.

With such a journey, Girish reminds everyone that true determination is the key to success.

Speaking of Girish, he has always been an avid motorcyclist and has traveled great distances on a motorcycle. While he started vlogging five years ago under the tag “Weekend on Wheels”, he has also actively vlogged classic vehicles through his “Never out of Fashion” series – Covering his cycling journey and providing in-depth reviews of high-end bikes.

In the second half of 2021, a heart attack took him away from vlogging for a few weeks, but he quickly bounced back even stronger and set off for Lonavala to attend IBW (India Bike Week), documenting the journey in his vlog series – ‘Reclaiming Myself Ride’.

“Life hits everyone and it hits some people even harder. They just have to bounce back and come back stronger. Life had hit me hard and so had my depression. But it’s the passion of riding who put me back in the saddle to achieve this feat. If you make up your mind and train your body, you can accomplish anything”added Girish.

Girish has always been an avid runner with skills to back up his enthusiasm and started vlogging five years ago. Now, with the K2K ride, Girish has proven that it’s determination and passion that makes you do the “I’m Possible”.