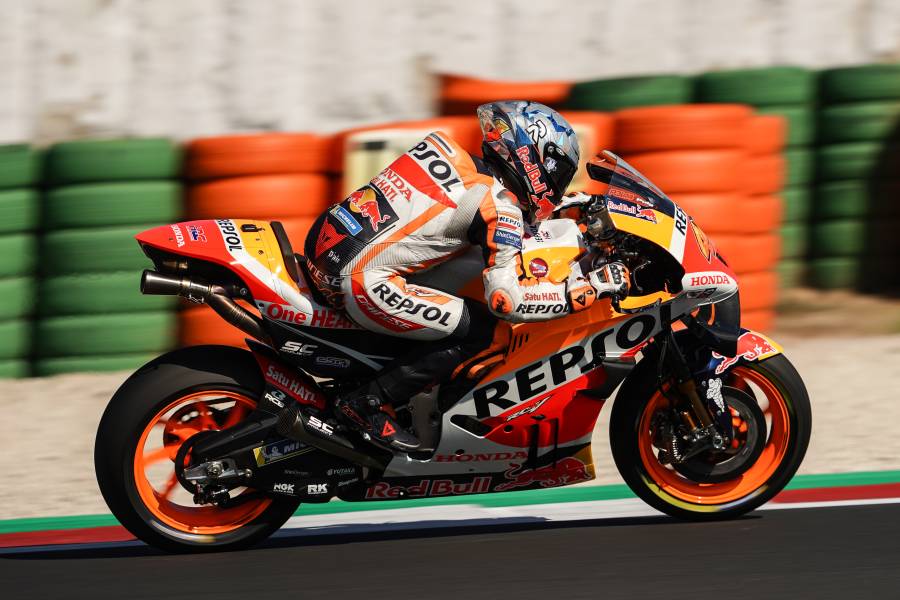 The Adriatic Coast produced another great day as action resumed at the Misano World Circuit Marco Simoncelli. It was an important day as Marc Marquez returned to the Repsol Honda team for the first time since the Italian GP at the end of May. Leaving just after 9.30 a.m. local time, the eight-time world champion completed a brief first run to initially assess his right arm. With all signs positive, he and the Repsol Honda team went into work mode and began their testing programme.

After completing a total of 39 laps before stopping for the day during the lunch break, the #93 finished its first day back on the bike with a best time of 1’32.395 – good enough for 11th place on the grid for the San Marino GP on Sunday. Although lap times weren’t the focus, Marquez still managed to finish the day 1.1 seconds behind the fastest driver.

It was an equally positive day for Pol Espargaro who set a best lap of 1:31.707, 1.1 seconds quicker than his Q1 time on Saturday. Limiting its run due to lingering pain in its right wrist following Sunday’s accident, the #44 was still able to complete 50 laps and stopped just before 4:30 p.m. local time. Espargaro and his team ran through a number of tuning options and improved his feel aboard the Repsol Honda. Even with the limited laps, Espargaro was happy with the day.

Testing resumes tomorrow, Wednesday 07, at 09:00 local time. The Repsol Honda team are aiming for another productive day before preparing for the Aragon GP and the air races.