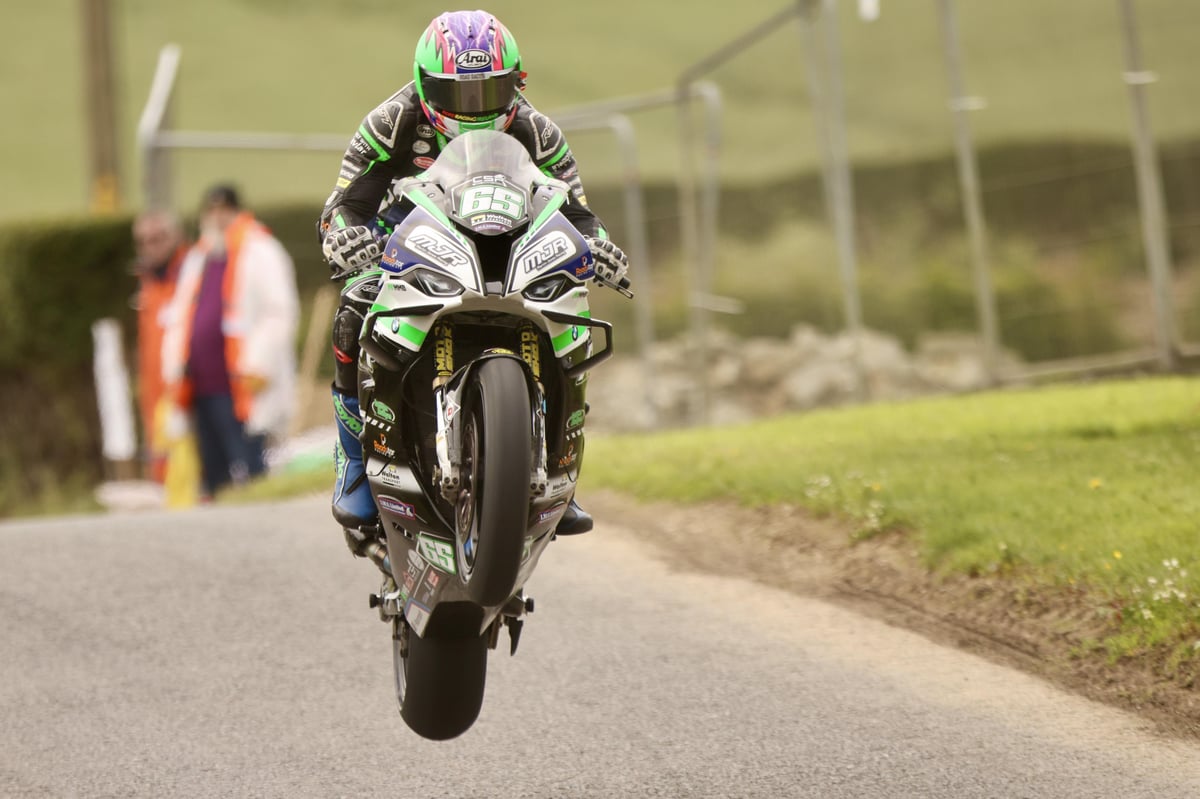 The coronavirus pandemic has led to the cancellation of all national meetings in the south in 2020 and 2021, with the East Coast Festival at the Killalane course in County Dublin, the last road race held in Ireland in September 2019.

On that occasion, Michael Sweeney won a quadruple and the Skerries man will be among the favorites today, a week after returning from the Isle of Man TT.

Sweeney’s aim this season is to win the Irish and Ulster Superbike titles on the BMW MJR, and on Saturday he topped the timesheets in the Superbike, Supersport and Supertwin classes.

Register to our daily newsletter

Michael Sweeney on the BMW MJR during practice at Kells Road Races in County Meath.

Ballymoney man Darryl Tweed is among the entries at Kells, where he will race a Honda CBR600RR for Wilson Craig Racing.

Tweed had the chance to race for Darren Gilpin’s team at the North West 200 in the Supersport class after his own machine expired in practice on Tuesday.

He was set to make his Isle of Man TT debut but Tweed was disappointed after pledges of financial support failed to materialise.

It was a frustrating few weeks for the Manx Grand Prix winner, who had a Wilson Craig Honda 600 waiting for him in the TT paddock.

Darryl Tweed in action on the Wilson Craig Honda 600 at Kells.

However, he can now look forward to the rest of the season on the WCR machines after Yorkshire’s Joey Thompson parted ways with the team after a disappointing TT.

Tweed was second fastest behind Sweeney in Supersport qualifying at Kells and third overall in the Open class on the 600 Honda.

Impressive Frenchman Pierre Yves Bian – winner of the Supertwin at the North West after Richard Cooper was disqualified from the results – will also make selected appearances in WCR colors and is expected to join Tweed at the Armoy Road Races at the end of July.

Mullingar’s Thomas Maxwell is also set to feature this weekend at Kells in his Kawasaki ZX-10R, although Cork’s Mike Browne is out as he takes a break from a physically grueling two weeks at the Isle of Man.

Browne returned to racing on the island after missing the Tandragee 100 and the North West 200 following an accident at the Cookstown 100 which left him with two broken ankles.

The Burrows Engineering/RK Racing rider broke through the pain barrier at the TT and sealed a ninth-place finish in the second Supersport race, lapping at 123.4mph.

He was also on course for a potential senior top 10 last Saturday until he was sent off on lap five, but Browne had the consolation of setting his fastest lap at 126.679 mph on the Suzuki GSX- R1000.

Team owner John Burrows said: “Mike is sitting at Kells this weekend and that will give him a three week break until Skerries and some time to recharge and let his ankles heal further. .

“The TT was pretty hard on his body and Mike did an amazing job considering the pain he was feeling with his ankles. But the further the race week went on the fitter he got.

“While we were on the island Mike was getting physiotherapy twice a day, he was seen by doctors and he also had laser treatment so everything has definitely helped him but this break now until Skerries will do him good.

“The first time Mike has ridden a bike since his accident in Cookstown was when he came down Bray Hill on the Superstock bike in practice so he has done a fantastic job for us and we expect be on the hunt for national road races to come over the next few months.

Roads close at Kells on Sundays at 8am with the first race around 11am.