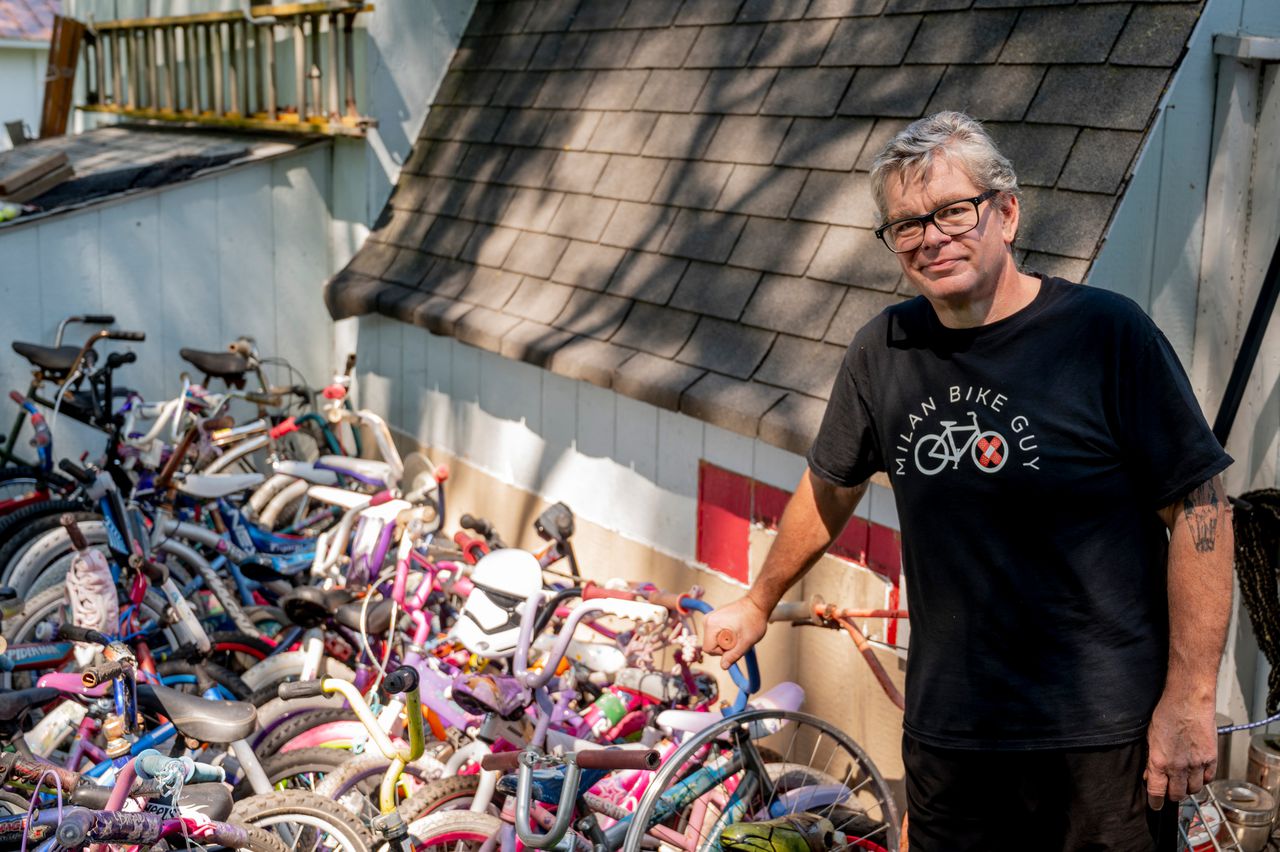 MILAN, MI — Vern White, also known as the Milan Bike Guy, has spent the past 10 weeks repairing and returning free bikes donated to children, adults and people with disabilities.

After knee replacement surgery earlier this year, the 53-year-old, who has loved bikes all his life, was stuck at home trying to find something to do. He quickly took to Facebook to ask his community to donate bikes that needed repairs for local children.

What started as a Facebook post quickly turned into a mission for White. He has currently repaired and repatriated 117 donated bikes as well as 40-50 personal bikes that people bring to him for repair.

“We give the community what it needs,” he said.

Although White is based in Milan, he said he is ready to help anyone, wherever they live. People came to him from surrounding areas like Saline, Ann Arbor, Ypsilanti and even as far away as Detroit and Toledo, Ohio.

White said he spends about six to eight hours a day working on repairs and can spend anywhere from 20 minutes to an hour and a half working on each bike.

“In a seven-day week, I could take a day off and feel horrible not working on bikes because I love it so much,” he said.

Star Looney, one of White’s neighbors, said she saw more people riding bikes and thinks it’s because of the Milan Bike Guy.

“He’s made a lot of kids happy where we live,” she said. “The neighborhood kids are in awe of him.”

Part of White’s efforts is to help people with disabilities find a bike that’s best for them. White works with people with cerebral palsy, autism and other disabilities.

“I love all the kids and all the adults who are happy, but those with disabilities who can’t ride a bike, and then we put them on a bike, and they have this freedom, it’s just amazing” , did he declare.

When there were only five to six bikes in the yard, Leslie White, Vern’s wife, said she didn’t understand what her husband’s efforts would soon become. Now the couple’s yard is filled with 50 to 60 bikes waiting to be repaired.

After seeing the impact, the couple said it was just the beginning for them. The couple decided to look into non-profit work to further help people with disabilities.

The couple aim to partner with Moving Milan Forward, a non-profit organization that focuses on the greater Milan area, for a grant this fall to get more bikes that can be used by people with disabilities.

“There aren’t a lot of resources for that in our community and we see there’s a huge need for three wheels or bikes with adaptive qualities and it’s very expensive,” said Leslie White.

Currently, the couple has a GoFundMe page where they are raising money to get parts for some of the repairs.

At first, Leslie White started the page at $250 and within two days donations had doubled – since then the page’s goal has increased as new bikes arrive.

Lori Pryor said White fixed her son Jeffrey’s mountain bike and gave him a second bike to ride on. She said White helped her son and his friend, Zach, bond and exercise with bikes.

Pryor said she saw White’s efforts cause a “ripple effect” within the Milan community as people donated supplies and money to help her mission. She hopes the Milan Bike Guy will continue not just for her son, but for everyone else.

“It’s become so much more than Vern and Leslie. It’s our community thing,” she said. “It’s really become the community trying to help Vern while he helps everyone .”