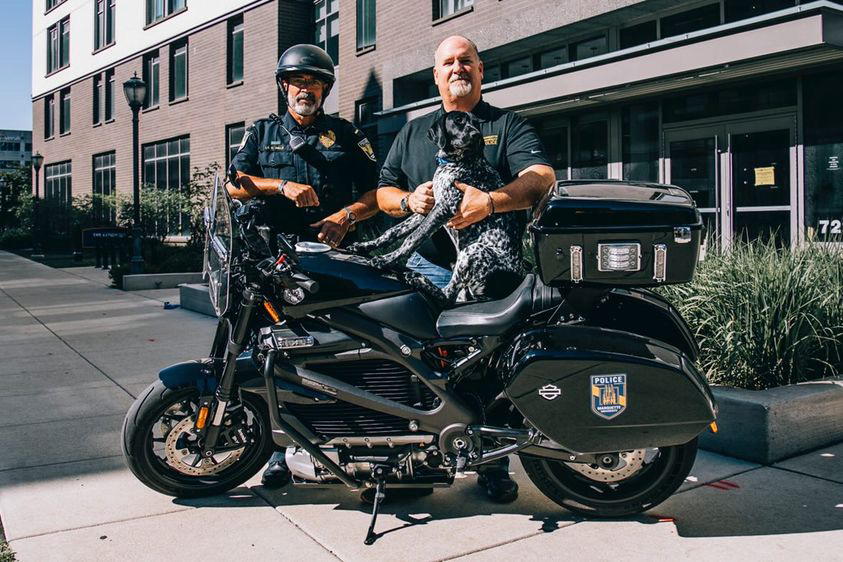 Students may be used to Marquette University cops traveling in squad cars, but now they may need to get used to something a little different. Something that may be familiar to Milwaukee natives – that is, a Harley-Davidson motorcycle on campus.

The Marquette University Police Department rides an all-electric motorcycle. The Harley-Davidson LiveWire is only the second of its kind in the United States to date and was “specifically developed for the MUPD”. as noted in a recent Marquette Instagram post.

Marquette University and the Vermont State Police are the only organizations currently piloting the program.

This comes nearly seven months after the MUPD announced it would transition to all hybrid squad cars by 2025, continuing its industry-leading sustainability efforts.

MUPD Lt. Bill Walz was the lead project manager for the installation of the LiveWire motorcycle on campus.

“I started talking to the LiveWire program manager and let him know who I was and where I worked,” Walz said. “I was looking at his bike and he asked me if I had ever ridden one to which I said no.”

Eventually, the principal offered Walz a chance to race the bike on the Marquette campus this year.

“I thought it was pretty cool that we were on loan directly from Harley-Davidson,” Walz said.

Harley is directly in Milwaukee.

“I just think it’s so cool,” Walz said. “I think it will be unique that you can see the bike before you hear it and generally you would be used to hearing one before you see it.”

Walz also said he hopes the new bike will open new kinds of conversations about sustainability on campus.

Walz has been in direct contact with Harley and LiveWire and continues to provide weekly motorcycle commentary.

“Once we’re done, I think they’re going to give it to other campuses and other police stations, so I’m lucky they gave me the feedback. how it works,” Walz said.

Not only is Lt. Walz the person who gives Harley the feedback, but he’s also the only one who can ride her since he’s the only MUPD member trained to ride a motorcycle.

“I wish I could send other officers there, but it’s a pretty intense training course that not everyone has gone through yet,” Walz said.

The training lasts about 80 hours and as the school year has just started, many agents are already preoccupied with their daily tasks.

In terms of durability, some applauded MUPD for sound leadership.

“From my perspective, the MUPD is doing a phenomenal job,” said Chelsea Malacara, sustainability and energy management coordinator for Marquette.

Malacara highlighted the fact that the MUPD has already done a great job in its sustainability efforts and hopes that their the efforts motivate other campus departments to consider sustainability in their decision-making.

“The MUPD has taken the initiative to move forward with these initiatives completely on its own, and not only is it showing innovation and leadership, but it will help us reduce emissions from our fleet of vehicles. , which includes MUPD vehicles,” Malacara said.

Malacara said these sustainability efforts are not easy and require a lot of planning and intention.

“I really appreciate sustainability,” said Carla Macias, a senior from the College of Arts & Sciences. “I am a vegetarian and I always think about how sustainability can be pursued at Marquette. I think it’s a start, but we definitely need to keep trying on campus because sometimes I think Marquette isn’t doing enough.

For the MUPD, you could say they feel the same way.

“It’s an exciting thing for us, and we hope to inspire other departments to increase their sustainability efforts as well,” Walz said.

This story was written by TJ Dysart. He can be reached at [email protected]