I was originally looking at the BTwin Riverside 120 or the BTwin Rockrider ST100. But riding the RC 100 completely changed my mind.

BHPian brt_mhn recently shared this with other enthusiasts.

My opinion on the Triban RC 100

There are a few things in life that give you immense joy. One of those things for me has always been cycling. I have been cycling since I was 4 years old. My first bike was a tiny purple, purple machine that I had until I was 7 years old. I then got a blue Hero Buzz which I initially had trouble flying due to my small size at the time. Well, like all things, I ended up learning to ride a “so-huge” bike and spent almost every evening riding with some same-aged idiots. We were racing, jumping, off-roading, swapping bikes for a day and so on! 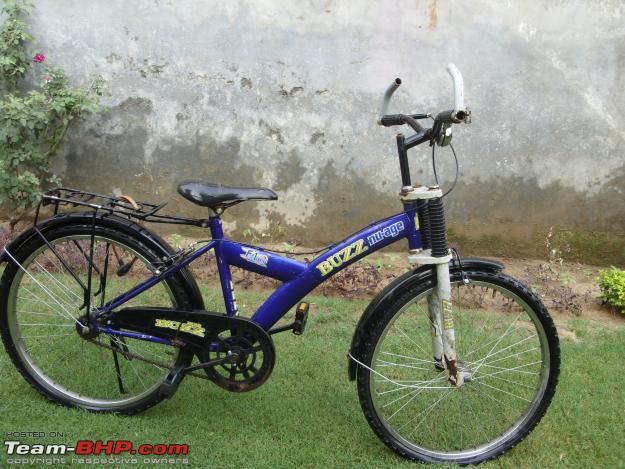 Eventually I outgrew this one too when I was about 13 and traded it in for a Hercules Roadeo Yago 26T. Why this particular bike, you ask? Well, like all kids, I longed for a big, muscular, muscular mountain bike just for looks, even if he didn’t get any benefit from such a bike. Having front and rear suspension didn’t hurt the looks either! It was the bike that really got me into the world of cycling. It was the first one I used to get to school. It was the first on which I rode a very long distance. I have so many other great memories associated with this bike that I won’t go into too much detail here in the interest of keeping this post as short as possible. I should probably write a book as elaborate as The Remembrance Of Things Past. I absolutely took it to the max. In its lifetime it had seen 2 derailleur replacements, 2 fender replacements, a chain and a shifter replacement. He also saw a wider, more comfortable saddle and a new adjustable stem. The cassette teeth were also worn. Needless to say, it was extremely difficult to give up because there were so many emotional ties. For my next bike, I was originally looking for the BTwin Riverside 120 or the BTwin Rockrider ST100. I was sold on the Riverside thanks to its value at 11,999. We then went to Decathlon to take a look at both bikes. Unfortunately, I could only fly the ST100. It was completely by chance that I took the Triban RC 100 for a quick spin. Little did I know that would completely change my mind. Yes, it was about double the price of the Riverside 120. Yes, it had one less gear. Yes, he had a posture that was much more committed than vertical. But the moment I set foot on it, I knew it was the one for me. This feeling was only made worse when we went to see the Riverside 120 at another store. This one was quite crowded and allowed me to fully exploit the handling capabilities of the RC 100. By the time we got home, the scales had completely swung to the Triban.

Up to speed? Good!

We had placed an order online and selected in-store pickup as an option. The whole process was extremely smooth and congratulations to the guys at Decathlon Atrium Mall.

Here is the cost breakdown: 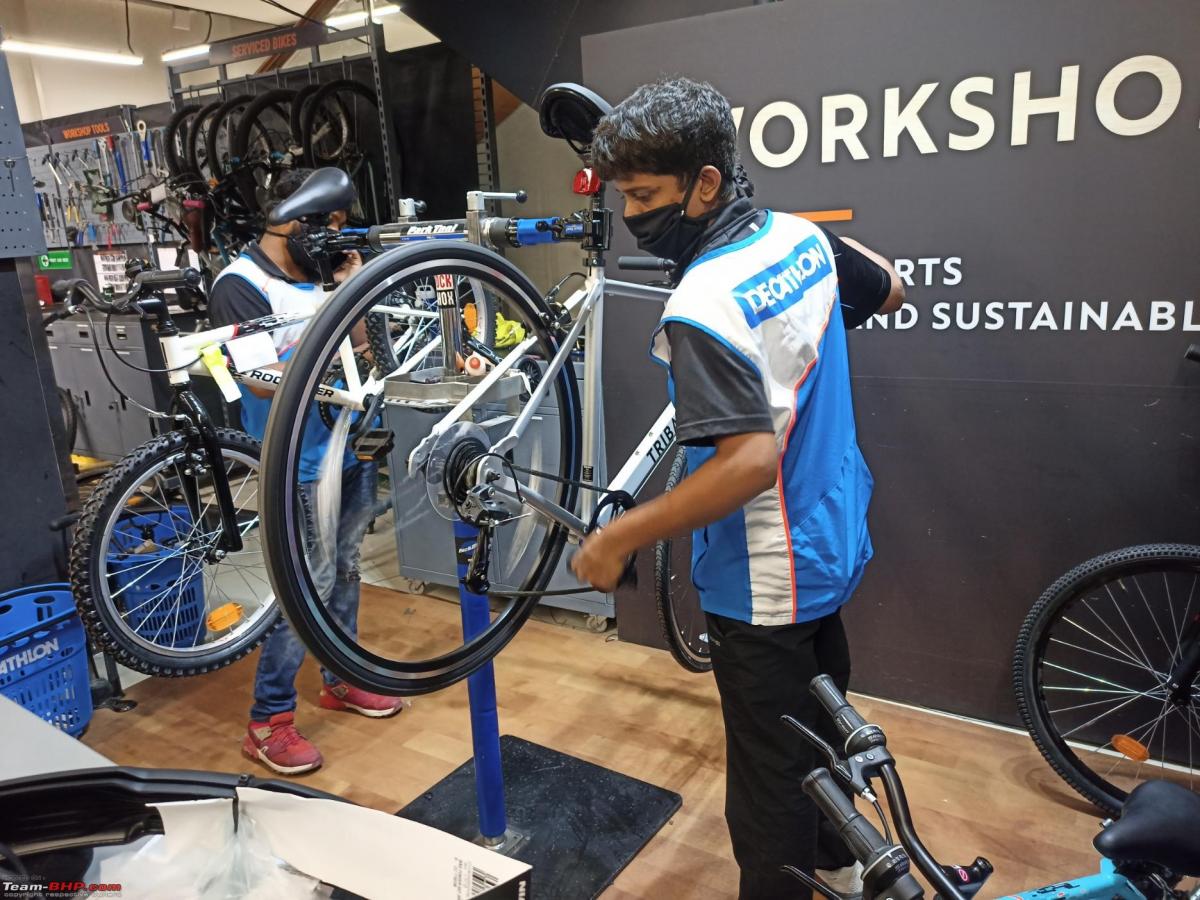 Well, now let’s talk about the elephant in the room. WHY DID YOU GET THE FLAT-BAR VERSION OF A ROADIE? !

Two things. First, my bike will be used for commuting quite often and with a backpack. I felt the slightly more upright position gave it a more familiar, approachable and dare I say it, more comfortable feel. The other reason is that the shifter on the drop bar requires you to take your hand off the bar and more importantly the brakes, which would have been quite annoying on our chaotic Indian roads. Now on to the bike itself. The frame is made of an aluminum alloy and weighs around 1.8 kilos. It comes in three sizes, namely S, M and the one I chose, L. The riding geometry is much more relaxed than a “real” road bike and you wouldn’t necessarily be wrong to call it hybrid. The sloping top tube only reinforces this impression. The frame has plenty of mounting areas for bottle cages, fenders and saddlebags.

The front fork is rigid and is made of steel despite which it turns well and is quite nimble.

You will also find double wall wheels with 700×25 tires. Interestingly, they seem to have changed the tires after the refresh. It now gets a different tread pattern. Although I haven’t been able to test these in wet conditions yet, they provide good grip in dry conditions and on “kuccha” roads. For stopping power, it comes with rim brakes front and rear that are downright lacking in bite, but you can’t really expect much more at this price. The upside is that it gets quick releases for both wheels. Another thing that changed after the refresh is the rear derailleur. It was replaced by a Shimano Tourney by a Microshift. The shifter is also made by Microshift. However, it is indicated BTwin on all components. While I won’t get into the whole Shimano vs. Microshift debate, I will say that the shifting action is quick and smooth and I’ve never had a problem with them. The drivetrain continues to have a single 44-tooth chainring at the cranks and a 7-speed at the rear with a 12 X 28 cassette. 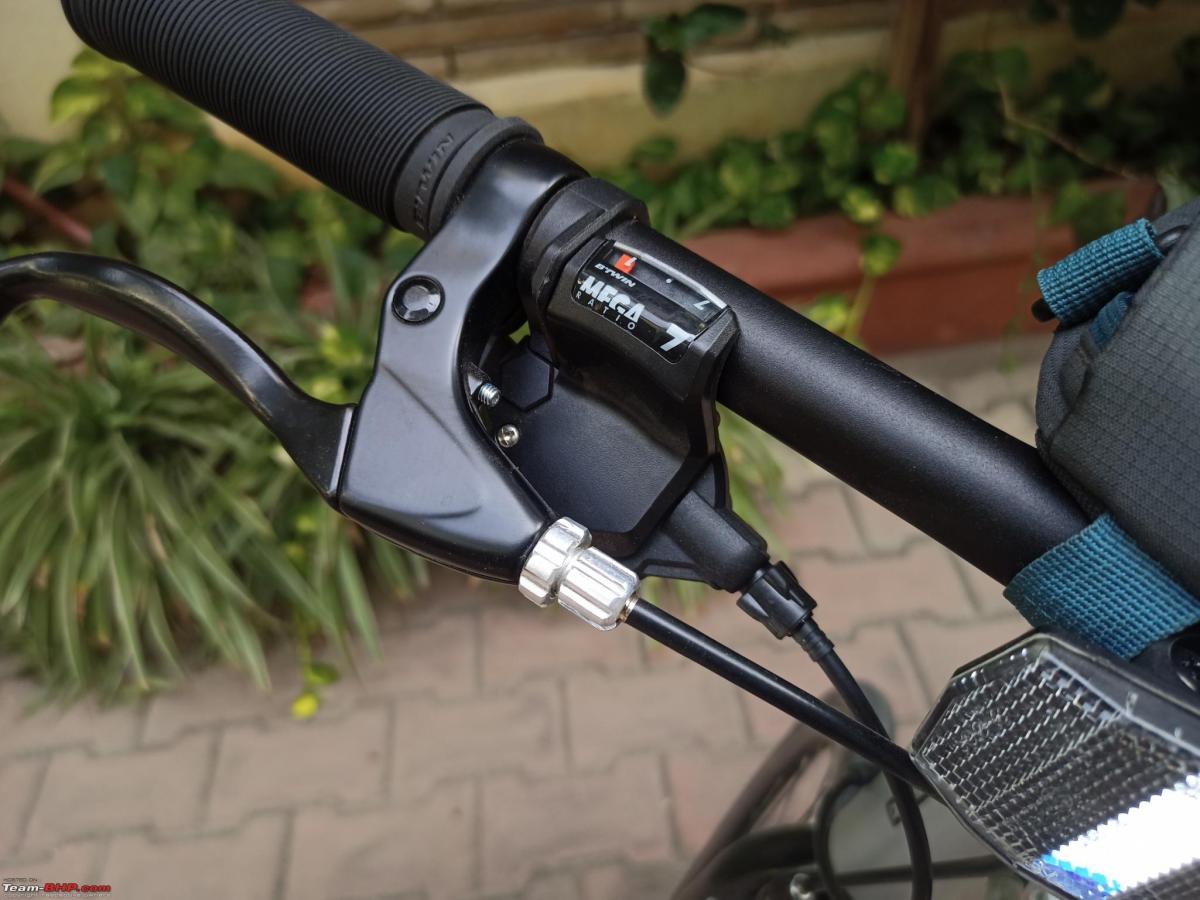 The handlebar is also aluminum and mine is a flat handlebar as mentioned before. It houses the brake levers and thumb shifter. I wasn’t initially a fan of having the up and down levers close together as opposed to one thumb operated and the other index finger operated, but it’s fine with me now perfectly. At the ends of the handlebars you will find super comfortable, nice and soft wrist rests. The handlebars are also wide enough to accommodate a range of accessories such as doorbells, phone holders and a small bag like the one I installed. (Fun fact, it’s not meant for a bike, but I found it just the right size for a phone and whatever else you don’t want flying out of your pockets.) The seatpost can be extended a wide range to help you feel nice and comfortable. There is no quick release and it must be adjusted using an Allen wrench. As for the saddle, it fits well and does the job. However, I won’t dwell too much on this because all posteriors are different from each other and what might be comfortable for me may not be comfortable enough for you.

Alright, I know looks are subjective, but I think it’s a damn good looking bike! And I’m going to stick to my opinion because I haven’t really found anyone who disagrees. It looks at home in any environment. It only comes in one silver gray color with a matching black fork. He gets tastefully executed badges in various places. I was also pleasantly surprised to find that it had a nice shiny metallic paint. The welds aren’t as bad either! Overall this bike looks clean and minimal, just the way I like things to be. The whole bike weighs just over 11 pounds and being nice and light, allows you to accelerate from stop lights fairly quickly. And once you get a good speed, you can hold it pretty easily too. Coming from a bike that weighs about twice as much, this was quite an eye opener for me. Add to that the inherent aerodynamic advantage, and my average speed has increased a lot. Before, I did 20 kilometers in an hour more or less 2 minutes. But now I can do the same thing in about 40 minutes.

To illustrate this again, yesterday, despite about 11 kilos of books on my back, I still managed to do 12.3 kilometers in 26 minutes without being out of breath! And since a greater percentage of the weight was on the rear wheel, acceleration wasn’t difficult either due to the traction advantage. Rear-wheel drive baby!

If you’re considering switching from a mountain bike/hybrid bike to a road bike, you only have one thing to consider, and that is ride comfort. Thanks to its targeted approach to speed, a road bike is stiff. You feel every bump. But every drop of sweat you shed will be rewarded knowing that all the power is going straight to the road without any loss of suspension compression.

On the after-sales side, you benefit from two free services, a lifetime warranty on the frame, stem, handlebars and fork.

All in all, I think it’s a stellar package and if you have $23,000 burning a hole in your pocket and are looking for a bike to ride, I’d keep this one on the shortlist. It’s really fun and gets my rave recommendation. Check out BHPian’s comments for more ideas and information.