The City of Phoenix canceled plans to widen a stretch of a downtown street and instead decided to create protected bike lanes months after a cyclist was killed there by a drunk driver.

Supporters of the beloved cyclist see the safety project as a posthumous step towards justice for the inner city ambassador in the orange jacket, who was beaten in late August and died a month later.

The city’s transportation department plans to build bike lanes along Fillmore Street between Central Avenue and Seventh Street that have a berm between vehicles and cyclists.

Advocates say this is long overdue and say city officials have been “dragging their feet” for years to improve safety for pedestrians and cyclists.

“I don’t know how many people have to be hurt or die before we see these proposed projects come to fruition,” said Stacey Champion, a local community activist. “It can’t come fast enough.”

Cyclists account for nearly 6% of road deaths in Phoenix, considered one of the most dangerous cities for pedestrians, according to a report by the United States Department of Transportation.

More than 1,200 pedestrians have died in vehicle crashes over a five-year period in Arizona. In 2017, Phoenix recorded more than 250 such deaths.

It is not enough to have cycle lanes on the road, but barriers are necessary, say the defenders. The cost of a bike lane is miniscule, and it could mean the difference between life and death for residents in traffic, Champion said.

According to Information center for pedestrians and cyclists, protected bike lanes can cost between $133,170 and $536,680 per mile.

More than 100 residents came together to offer their support for bike lanes at the town’s community meeting Tuesday night that involved Arizona State University, the Phoenix Spokes People bike group and other community groups.

“The public meeting provided our staff with meaningful feedback that will be considered during the project design process,” said city transportation department spokesman Gregg Bach.

Support for cycle lanes has increased after the death of Hans Hughes, a 43-year-old man who was hit by a drunk driver near First and Fillmore streets while returning home from work on August 20. He died of his injuries on September 21.

Friends, neighbors and colleagues barely remember a time when downtown Phoenix ambassador Hans Hughes (right) was not helping anyone. Hughes was killed by a drunk driver while riding his bike through the city center several months ago.

Hughes was an ambassador for downtown Phoenix, helping visitors navigate the city streets.

“It’s really a fix,” said Ryan Boyd, who serves on the board of directors of The Fillmore Project’s Urban Phoenix. “What still haunts me is just that you wish Hans were there to see this, instead of the cause that [necessitated] we achieve it.

RJ Price, a former colleague of Hughes at Downtown Phoenix Inc., remembers the deceased as a “beloved member of the downtown Phoenix community” who left an indelible impression on tens of thousands of residents. , employees, students and visitors. 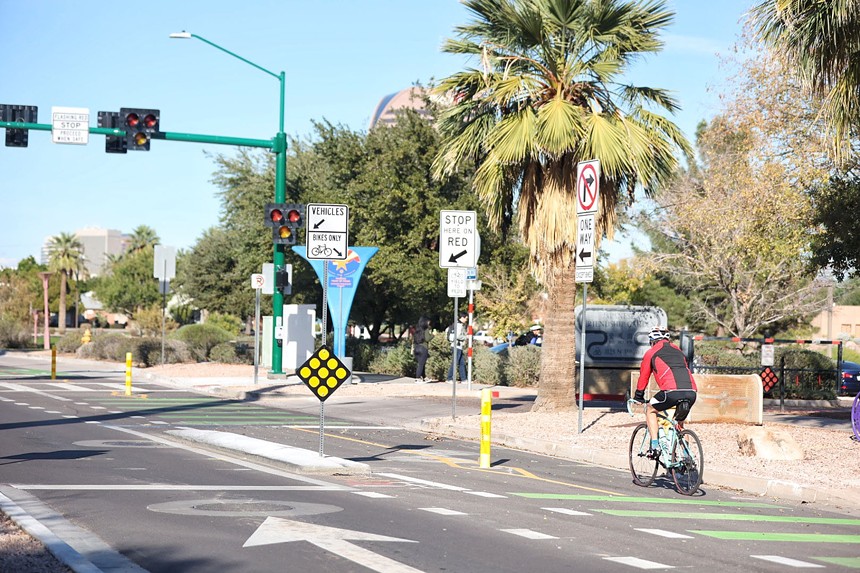 Protected bike lanes in Phoenix have been installed in recent months.

“Improving cycling infrastructure downtown and throughout Phoenix will save lives and positively impact many people,” said Price, the organization’s chief marketing officer. “It will also ensure that Hans’ tragic death is not in vain.”


Phoenix City Councilwoman Yassamin Ansari is a vocal advocate for pedestrian safety in the city’s Seventh Ward, which stretches west toward Avondale from downtown.

“We do not know if protected cycle paths would necessarily have saved [Hughes] in this particular case, since it happened in the intersection, [but] the reality is that bikers in our city are constantly at risk, due to the lack of protective infrastructure and clear signage,” Ansari said. “These changes could save future cyclists like Hans.”

Phoenix’s first two-way protected bike lanes along Third and Fifth Avenues opened recently to provide a safer way to travel north and south through downtown. It still lacks a road that runs from east to west.

The Fillmore project fills the void, but city officials are pushing to extend bike lanes beyond Seventh Street to the east and Central Avenue to the west. The city plans to deploy more than 1000 miles of bike paths by 2050, but this section of downtown is special.


“After Hans’ tragic death, we saw an outpouring of support and requests for protective infrastructure to make cycling in downtown Phoenix safer,” Ansari said. “People are moving downtown because they want to be within walking and biking distance of work, groceries, bars and restaurants. This project will help make downtown more walkable, which the community here wants to see.

If the project goes ahead, the work would be completed in the spring of 2022.

“The coalition of people supporting this has grown every day,” Urban Phoenix’s Boyd said. “It’s amazing to see that the community really supports the need for real bike lane protection.”

Phoenix city officials consider the city safe for bicycles, despite its history and national reputation as a dangerous place to travel on two wheels. The city refers to Fillmore as a “bike boulevard”.

“It’s kind of a laughing stock to have a cycle boulevard with a small stretch of sharrows [painted markings] and no actual bike lanes,” Boyd said. “You have stronger bike protection in random parts of suburban Phoenix than on a Phoenix city bike boulevard.

Cyclists are still dying on the streets – most of which don’t even have painted lanes, let alone barriers.

On December 16, a cyclist was hit by a sedan while traveling along McDowell Road near 34th Street in Phoenix. Jeffrey Ray, 53, died later that night.

Phoenix police have charged 18-year-old Javon Holston with a hit-and-run for leaving the scene of the crash. This is not the kind of justice that justice advocates want.

From amateurs to street racers, there are tens of thousands of cyclists on the roads of Phoenix, with USA Cycling (USAC) hosting dozens of events in Phoenix each year.

The Phoenix City Council approved $4.5 million for a pedestrian safety plan to target dangerous intersections such as Sixteenth Street and Camelback Road, Nineteenth and Southern Avenues, and 75th Avenue and Indian School Road.

“Many new cars are also equipped with advanced technologies that automatically brake when they detect that another vehicle, pedestrian or object may be too close – pads like these would provide an additional cue for action,” said Ansari, the board member. 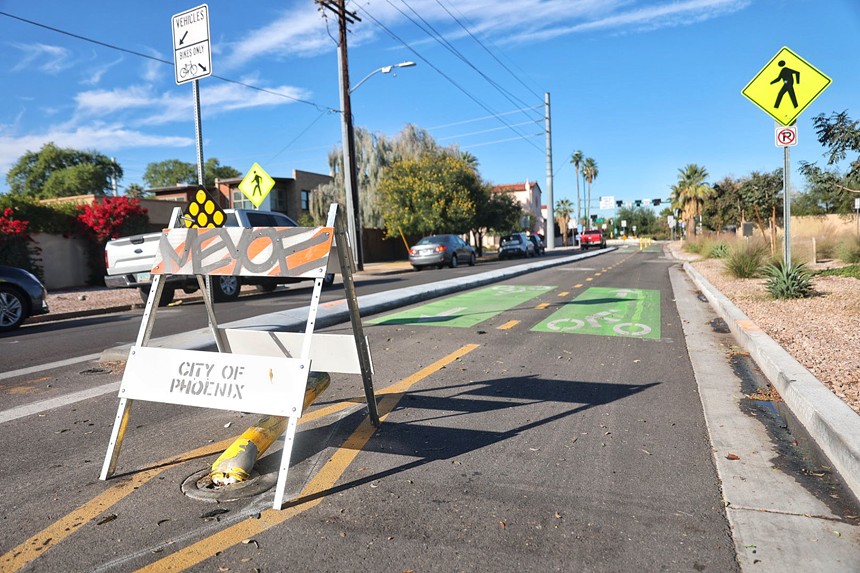 Despite physical barriers to separate vehicles and bicycles on the roads, damage was caused to a barrier in Phoenix.

Improved pedestrian safety downtown is the harbinger of a bike- and pedestrian-friendly city. Regional security plans are in the works, she said. The city collects data to measure the impact of safety efforts, and council member Ansari is alerted via text message whenever a high-profile accident occurs in the city.

Boyd sees Hughes’ untimely death as a catalyst for improving pedestrian safety in Phoenix. Downtown is supposed to be the most walkable and bikeable area of ​​the city, but community support after the cyclists’ deaths has accelerated the project.

“It wasn’t even on the books until the community raised the flag and said we have to make this happen,” Boyd said. “To the city staff’s credit, they sped this up. They made it happen because they knew we were all up in arms.”