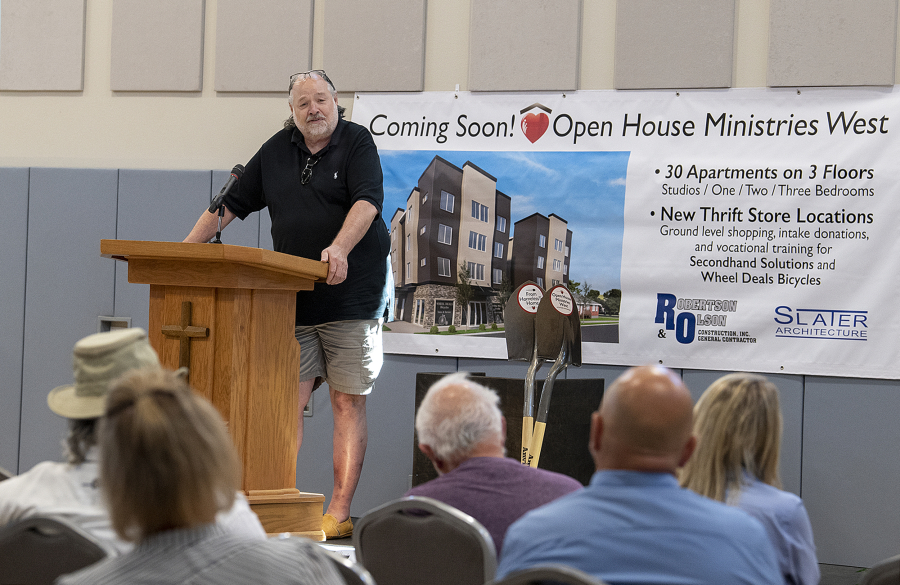 “Our challenge is how to expand our program to keep pace with the growing homeless population we serve,” said Michael Lynch, Honorary Co-Chair of Project Cornerstone, the fundraising campaign behind the building. “Our new Open House Ministries West building will allow us to more than double the number of people we serve with only a slight increase in operational costs. And that’s what I call a miracle, and part of what makes this campaign so wonderful.

The new building will be adjacent to the primary property of the faith-based service provider. Families who graduate from the Open House program and are employed will be able to move into one of the apartments. The rent will be determined according to the family’s income. The building will contain a mix of studios, one-bedroom, two-bedroom and three-bedroom apartments and will have 38 parking spaces. Amenities will include washers and dryers in each apartment and storage units for tenants in the basement.

The project is expected to be completed in November 2023 and the first residents are expected to arrive in early 2024.

The apartments will offer a step towards independence. Families living in the apartments will work and pay rent, but will still consult with an Open House case manager until they are able to find alternative accommodation.

Families will be able to live in the apartments for as long as needed, according to Stevens.

“Each family that comes to Open House Ministries has a unique situation,” she said. “We are not yet trying to impose a time limit on these people. Some families will be able to come and stay for two years and be able to move towards sustainable housing. Other families may take a little longer, others a little less. So we are not trying to restrict the schedule at this time.

The building will also include commercial space on the ground floor for Second-hand solutions thrift store and Wheel Deals Bike Store. Both stores provide job training for Open House Ministries residents and add significant revenue for operations, but are to be relocated.

In March 2024, the city is scheduled to demolish the Open House Ministries Annex building as part of an $11 million project to align West Jefferson Street and Kauffman Avenue to create a freight corridor. Open House Ministries hopes the two stores will be relocated before road construction begins.

The road project is one of the reasons Open House Ministries started to pursue the project. Acquiring the empty land adjacent to the current shelter sealed the deal, according to Lynch. Its location means families will have access to resources such as case management, education programs and a weekly chapel.

Over the past two years, Open House Ministries has raised funds for the project through its Cornerstone Project Fundraising Campaignwhich has so far raised 80% of its $12 million goal.

To learn more about the project and to donate, visit www.ohmwest.org.

“I’ve traveled across the country to visit homeless shelters and speak to housing experts, and have seen with my own eyes that Open House Ministries is leading the way in providing long-term solutions for homeless people who will transform their families for generations,” Lynch said.