Opening of an electric bike shop; Closing of the cheese cellar Opening of an electric bike shop; Closing of the cheese cellar

The neighborhood is also home to a new beach-themed gift shop and is set to have another crystal-based “wellness” retailer. But it also means losing a beloved cheese factory.

Check out all the latest changes in redbankgreen‘s Retail Churn. Steve Catania, owner of Cheese Cave, in 2018. Below, Kris Winters opened Locker 19 in the same building as his first boutique, Cabana 19, on White Street. (Photos by John T. Ward. Click to enlarge) 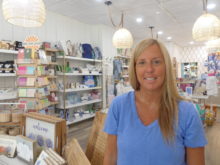 The business will focus on sales of e-bikes and electric-assist bicycles made by Super 73, Wicked Thumb, Jupiter Bike and Electric Bike Co., Mitro said.

Rentals are not planned “for the moment”, he said.

Mitro partners in the store with Kenny Schwartz, owner of the nearby Detour Gallery. Along with Jason Gamba, they also own Monmouth Indian Motorcycle to Neptune, of which EV Motion is a subsidiary, he said.

Schwartz owns the bike shop building, which he purchased last spring. Out back on the Canal Street side is a 33-space parking lot where customers can test out battery-powered bikes, Mitro said.

The shop debuted Friday, just in time for the downtown sidewalk sale, of which Cabana 19 is an annual star attraction, selling merchandise at 70% off, Winters said.

Both stores are located in the White Street building off Broad Street, which also houses a Rook cafe and a Hair & Company salon. Locker 19 took over the space vacated in June 2021, Handcrafted Quicksilver Jewelry.

• According to its website and window displays, a company called back to nature opens at 25 Monmouth Street.

The website offers crystals, perfumes, jewelry, and other products advertised as “wellness” items. The owner did not respond to an email request for additional information.

Back to Nature, which also has a store in Chester, occupies space vacated by Earth Spirit New Age Center, which moved to 18 Broad Street at the start of the summer.

Although they are in the same industry, there is no connection between the two, said Chris Midose, owner of Earth Spirit.

• The Cheese Cave is closing on August 31, owner Steve Catania announced on Facebook on Saturday.

The boutique, at 14 Monmouth Street, opened in early 2011 when Catania changed careers from chef to retailer. Now, after more than 11 years, he writes, “the decision to close was not easy, because it was the fulfillment of a dream of being an entrepreneur and doing something that I have always loved. – serve people and bring them a little joy through food.

He gave no reason for the closure.

Catania has been a force for the Downtown Affairs Committee and is the Past President of the board of directors for Red Bank RiverCenter, the Borough’s special improvement area promotion agency.

If you enjoy the media coverage provided by redbankgreen, please become a financial supporter for as little as $1 per month. Click on here set your own monthly or annual contribution level.