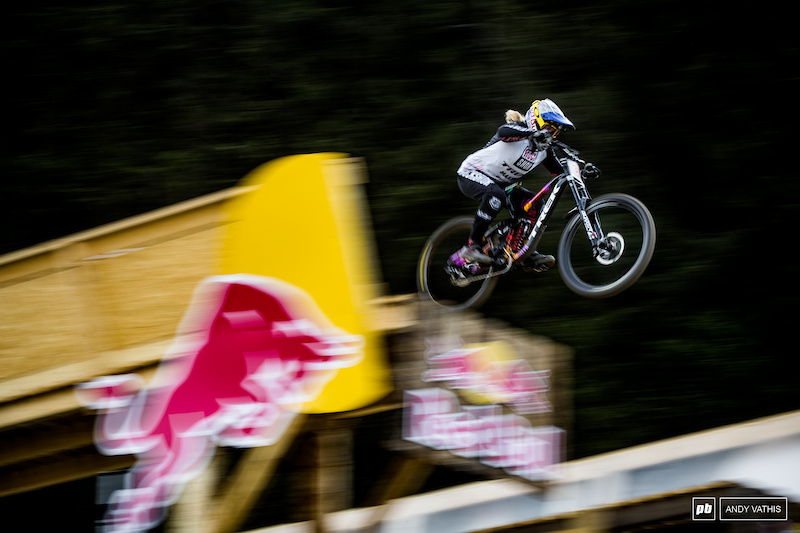 We’re optimistic about DH’s future with Discovery, but let’s not forget who brought us here.

In the comments to the press article about Discovery winning the rights to cover the UCI World Cup earlier this year, one thing is missing: people are saying thank you to Red Bull. In fact, of the over 400 comments, I only saw six directly acknowledging what Red Bull has done for mountain bike racing.

We should. Red Bull took the mess that was World Cup coverage and made it professional. Yes, a small part of me still misses a drunken Rob Warner happily shouting about whatever crossed his mind, but that’s rose-tinted nostalgia. The thing is, the World Cup is much better today for Red Bull’s investment.

When I interviewed Specialized’s head of global racing programs, Benno Willeit, last year, he summed it up like this: “Red Bull has done great things for us. Without them, we wouldn’t even be here. I mean the days of Freecaster, Rocky Roads… It didn’t work. Red Bull has saved our lives many, many times. But at the same time, I think right now we have the racers, in cross-country, in downhill, we have real idols who inspire others to do what we do, what they do. There is a huge industry behind us. There has to be a way to get a bigger piece of the pie than we are doing right now and take the next step professionally.

Here’s the rub, the big question: Was Red Bull a big enough player to take the sport to the next level?

Before I point out the company’s drinks empire, F1 team and all, yes, Red Bull is successful. But when it comes to media influence, they’re not in the same league as Discovery. While a quick Wikipedia search will tell you that Discovery generates about twice as much revenue per year as Red Bull, that’s missing an important detail. Red Bull makes its money doing lots of different things, making energy drinks is no small part of that number, while Discovery does one thing: media.

Many people don’t realize that Eurosport (a channel operated by Discovery since 2015) held certain rights for the DH World Cup in the past. If Paton was commenting for them and was able to see the live viewing numbers. He last commented ten years ago and remembers clearly: “I remember a race where the World Cup followed MotoGP. I was in the studio, where you get live audience numbers. I was in the pit and you had the ad, ‘World Cup downhill follows after break’ They had over 10 million people watching MotoGP and you could see over half of them turn off saying that, but it still left several million people watching the race. People who may have never heard of DH before and thought, “That sounds interesting. My next door neighbor has no interest in DH, but he came to me to talk about it as he was watching it after Moto GP. That’s where the value is, that’s when he discovered the Athertons, Danny Hart, and that kind of mainstream recognition is huge.

The most recent viewership figures we have for the Red Bull series are from 2019, and they show just how great a job Red Bull has done. When the numbers were released in 2015, the series drew around one million cumulative viewers during the season. By 2019, that had increased tenfold to reach 10.8 million viewers. However, in total, Red Bull’s footage of the World Cups reached 82 million people via TV syndication, including live highlights, recap programmes, short reports or news. The implication is stark: under the current arrangement, only around one-eighth of the total audience comes from marquee broadcasts.

When we talk about Discovery, most people will assume World Cups will go to Eurosport, which is understandable. After all, Eurosport will likely show the races to a mainstream European audience, which would attract the bulk of viewers. However, in the modern world there are more options available, the race will likely be split across a few platforms that can be streamed globally, namely the GCN Race Pass.

Today, it costs €40 a year for commercial-free coverage of nearly everything in professional road racing, with app-specific broadcasts for insight and analysis. This gives them space to offer more nuanced (and ad-free) coverage than on a linear TV channel. At the moment, it leans heavily towards road cycling, largely because mountain biking doesn’t show much broadcast content that it could show. When they got the rights, the Olympic XCO, Olympic BMX and European XCO championships were all on Race Pass last year.

With our State of the Sport survey last year, we were shocked at how poorly paid many runners are. Surely we all want more, better races, to see riders paid properly, fancy camera angles and sharp analysis? If we want to change that, the sport must change and grow. We need more people watching the races to attract more sponsorship money from outside the sport. To think that change can happen without more money in sport is wishful thinking. If you’re not convinced, ask someone like Rob Warner what the paychecks were like the last time the sport gained mainstream recognition in the Grundig era.

Maybe this Discovery deal will work, maybe not, but it sounds like a lot of a step in the right direction if we want the sport to grow. And if you’re not happy with the commentary, why doesn’t anyone do what UFC fans do and find a way to offer alternative commentary? [Ed. note: should we get Henry and Levy all hopped up on energy drinks and make this happen?]

It’s a big change for the sport, and it’s normal to be nervous when things change. Through it all, we must not forget to say thank you to Red Bull because they have done so much for mountain bike racing.