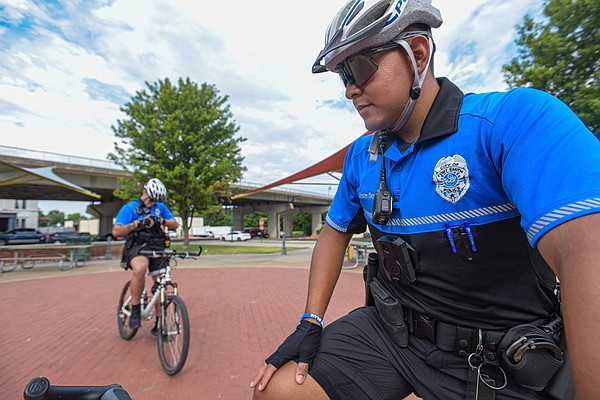 Police Chief Danny Baker said by email that the unit is making officers more accessible in pedestrian-friendly locations, which helps the department in terms of community policing. It also improves the service’s mobility and responsiveness in situations that are not as practical for a typical patrol unit.

“As downtown entertainment options evolve, parks and trails continue to expand, and our rapid growth in East Fort Smith continues, these services will be critical to engaging and community response,” Baker said.

Doug Reinert, director of the Parks and Recreation Department, said he believes the unit will be able to access and assist people who find themselves in an emergency while using the trails. city ​​events, such as a medical event or an injury. There will be a significant amount of ground to cover between the city’s current trails and those it plans to build, with people using them both for recreation and as alternative transportation routes.

Examples of existing trails include the Greg Smith River Trail which runs along the Arkansas River from downtown and the Chaffee Crossing Trail System on the east side of town.

Grubbs, who oversees the unit, said it will also patrol neighborhoods and the city’s three entertainment districts, adding that the latter will be easier to patrol on a bicycle.

“When you get in a car, you’re kind of separated from a lot of things going on around you, even if you keep the window down,” Grubbs said. “But when you’re on a bike you open up all of your senses and you can hear and that helps you patrol areas like that.”

The unit will also be involved in community relations and special events for the department, according to Grubbs.

Grubbs said the police department first established the bike patrol unit in the mid-1990s with money from a community-oriented policing grant from the U.S. Department of Justice before the city does begin to cover the costs. The unit had dedicated 20 officers and two sergeants at one point before a post-9/11 diversion of resources and dwindling manpower resulted in its remaining officers returning to the department’s standard patrol division at the end of the 2000s.

Baker said reviving the unit as resources and manpower allowed had been a priority for him since taking office in 2019. He noted that the department had gone through a period of transition during which many officers retired or moved to competing agencies.

Grubbs said the department had 162 sworn officers Wednesday, and five more are preparing to become fully eligible to serve. The department is budgeted for 164 sworn positions across all divisions, although city administrator Carl Geffken allowed it to hire four additional people.

Grubbs said the department began work in earnest on reimplementing the bike patrol unit in the first quarter of this year. He pulled out six Trek bikes the unit previously used from storage and serviced four of them to make sure they were “ready for the road.”

The unit currently consists of a bike officer and a supervisor who have undergone training through the International Police Mountain Bike Association, according to Grubbs.

sergeant. Unit supervisor Alejandro Marin said he loves cycling and several members of his family feel the same way. Being part of the unit gives him the opportunity to be closer to the businesses and people who make up the local community.

“I mean, it’s something different than being in a car all day, plus it’s also exercise there,” he said.

Manuel Valente-Sotelo said he was motivated to join the unit as a patrol officer after seeing how popular cycling has become in the area, which he believes will continue to grow. He also enjoys hanging out with the community through the new program, especially downtown.

“People really like to see us there,” Valente-Sotelo said. “It’s something they haven’t seen in so long. It’s a surprise to them, but it’s a good surprise because they see the efforts of the department and it’s just a way of showing them that we are actively trying to improve our relationship with downtown and Fort Smith as a whole.

Marin said he and Valente-Sotelo patrol downtown before transporting their bikes to do the same at Chaffee Crossing.

Grubbs expressed hope that at least one additional patrol officer will be transferred to the unit over the next two months, as well as having the unit at four officers by the end of the year.

Fort Smith has approximately 36 miles of trails defined for construction in a master plan, of which approximately 12 miles are complete.