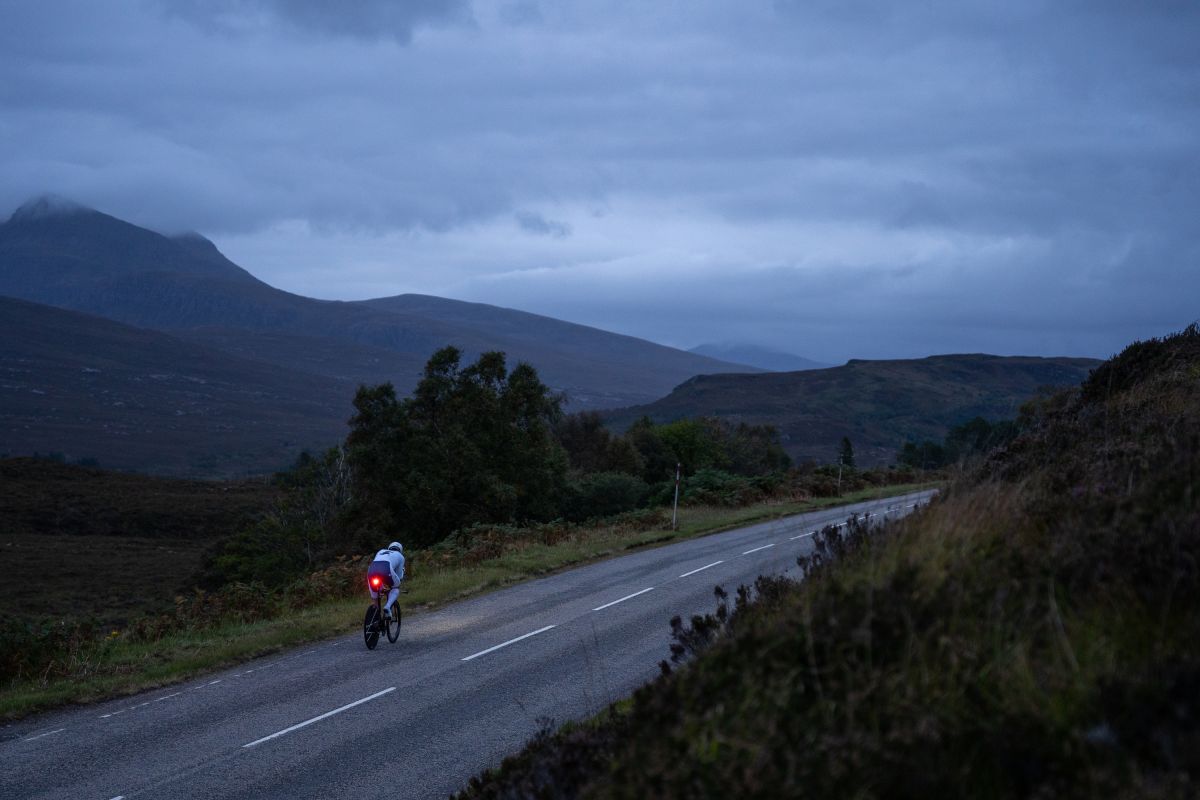 Complete darkness is a bit foreign to those of us who live in any type of conurbation. Thanks to light pollution, even at the edge of an urban area, a faint hallogon glow bounces off the sky. You have to travel a long way from civilization to enter total darkness, assuming you don’t feel like jumping underground. But the Scottish Highlands offer this kind of sensory deprivation in abundance, it’s the perfect total nothingness.

That’s what Mark Beaumont had to contend with when attempting the record-breaking North Coast 500 (NC500), the 516-mile route that traces the north coast of Scotland, which meant riding non-stop all night , a night that in mid-September lasted about 12 hours.

His effort started in Inverness at 8 a.m. on Saturday September 24 and ended 28 hours and 35 minutes later, just after 12 p.m. on Sunday. A new record, verified by the World Ultra Cycling Association (WUCA).

Setting off from Inverness Castle, the mood was suddenly frenetic as Beaumont needed his bike, which was still being finely tuned, in time for his scheduled departure. Once he left, we rushed to get into the cars that would follow him for the next day.

Following a support vehicle, from around Ullapool, all you could see for hours was the red light on the back of Beaumont’s time trial bike, moving steadily forward; a small red dot of hope in the inky black.

It reminded me of the go-ahead Gatsby points to the other side of the bay in The Great Gatsby, the eponymous character’s beacon. As the narrator writes: “…he stretched out his arms curiously toward the dark water, and away from him I could have sworn he was shaking.” Involuntarily, I glanced out to sea and saw nothing but a single, tiny, distant green light that might have been the end of a wharf. When I looked for Gatsby once more, he was gone, and I was alone again in the uneasy darkness.

Speaking after his attempt on Sunday, the 39-year-old said it was one of the reasons he was successful, his ability to keep going all night.

“I’ve done a lot of night cycling, so I have the discipline to ride fast,” he told Cycling Weekly. “I think it’s just the unknown when people are riding through the night and through the night. Some of these little roads, when you’re going downhill fast on the tri-bars, there’s no room for l “mistake on these roads. I’m constantly trying to stay safe. But I’m trying to go fast. You can waste so much time overnight, if you brake all the time, or if you naturally slow your circadian rhythm , when you are tired.

“I often think that one of the advantages I have is that I rode a lot at night. These races are not won at noon, they are won at midnight. How good are you in the middle of the night? »

Nighttime brings trouble, especially on the roads of northern Scotland where deer and other wildlife roam freely. It wasn’t anything wild that nearly sabotaged his attempt, but rather farm animals.

“I was so lucky,” Beaumont explained. “I was doing about 30 miles an hour and the sheep scattered. I locked in, then released my breaks. I just picked a line and luckily there was no sheep in the line I took. But it was pure luck, it would have been a really serious accident.

It’s worth focusing on the night ride, as that was the most impressive part. While the support team members swapped roles, slept a little, struggled to get on,

Beaumont charged in the dark, keeping his average high, racing to victory.

There was a moment, when we thought we had put enough distance between us in our vehicle and Beaumont and his follower vehicle, that we stopped to rest, only to see the rider pass by again at his incredible pace. It never ended.

You may know Beaumont’s name because he achieved epic feats before breaking the world record for circumnavigating the globe, which he did in 79 days, in 2017 and 2015. He also broke the record of the world’s fastest solo lap for length. of Africa, finishing in 42 days and 8 hours. However, to see him up close was impressive, to be there to see the speed, the relentless energy, the focus. I couldn’t get close.

If we compare the times of Robbie Mitchell, the former record holder, and Beaumont, the moment the latter started to turn the screw and take the time was only over 350 miles away, at About John O’Groats.

He was saving a lot of time by not taking many breaks. A ten-minute break was scheduled every six hours, but in the end they were downright reduced. He spent about 16 minutes on his bike in 28.5 hours, which is frankly ridiculous. I’ve done two-hour rides where I’ve gone longer off the bike thanks to one thing or another.

Each stop was a crucial point that showed the team around Beaumont what a well-oiled machine they were. A car would go ahead and find a suitable stopping point, he would stop on his bike and drive straight off to relieve himself, while his bike was checked and wiped down, with batteries on his lights recharged if necessary.

On his first stop near Torridon, after climbing Bealach-Na-Ba from Applecross, he gave himself time to check things out before setting off again. Any normal person would need a half hour break after that. Almost everything eating and drinking was done on the bike, specially checked, with no margin for error.

Beaumont was often ready in front of the team itself, which had to work at its own pace. If he had been hungry or thirsty at any time it would be too late, but that was avoided. Not that everything went well, physically and mentally.

“There were real seizures, I had one around dawn this morning,” he said shortly after finishing. “At about 350 miles, I felt so bad. Got another one late afternoon yesterday at about 150 miles. I guess by then I had come a decent way, but it still felt like a gigantic task ahead of me. You start to feel bad. And you think, ‘oh, crikey, I’m only halfway there’.

“It’s quite intimidating and it can get into your head. I don’t listen to anything. I am not distracted. I literally stare at my Wahoo in a pretty awkward position. It’s a stunning bike. I mean, you saw how fast it was. But it’s not made for comfort. And especially on these roads. The NC500 has pretty broken tarmac and rough roads, you’re just completely beaten.

There were also some serious climbs on the 516-mile course. The drive to Bealach-Na-Ba is breathtaking, although he didn’t have time to cover everything en route, concentrating instead on climbing the 626m drop in 9.1km. It would be tough on a road bike, let alone a TT bike, through Scottish weather alone.

The team behind the runner

It was up to Beaumont to keep pedaling, keep his power and pace, and fight off the fatigue that built up over the 28 hours. However, to enable him to do this there is a group of people to keep the whole operation on the road, to keep his bike running perfectly at all times, and to feed and hydrate him.

There was a first car, the follower vehicle, with a driver, Iain; a mechanic, Peter; someone in charge of nutrition, who happened to be his wife, Nicci; someone who looked after Beaumont himself, Alice. Then there was another support vehicle, with Mike Griffiths, the organizer of the whole project, logistics and everything, and James Lowsley-Williams from GCN and Ben from myWindsock, with a film crew , another van driven by Natalie and myself above this.

Speaking ahead of the attempt, Nicci, Beaumont’s wife, spoke of her nerves, in particular her safety on the road, but also her role in the team – it was her first time joining to an attempt. “I just wanted to come over and be a driver or something, and now I’m the nutritionist and I take care of keeping him healthy,” she said. “I don’t think it’s going to change us much, because when Mark is training, I keep my distance from him anyway, and I can judge his mood swings very quickly. I think I have to keep my emotions a secret. and staying stubborn. I always really envy them coming back from an expedition and how they all buzz together.

“I like being with the team and working together. And just being part of it is a really nice feeling. I don’t know if it will be something I will continue to do. But this is a truly amazing opportunity.

At the end, Beaumont was telling her that she had passed the test and Nicci was crying with pride – a bit of exhaustion and fear on top of that. We were back at Inverness Castle, although this time the gates were closed and the team had to pose in front of the building work taking place there. It felt like a huge amount of time and no time had passed, although we had time for the second.

There were lots of little things keeping the team together that would be invisible to a viewer – sandwiches bought in bulk from Inverness Morrisons, a huge order of fish and chips from Ullapool and 14 coffees from a self-service machine at Golspy. This all happened while Beaumont was walking away.

It was mission accomplished, and while at times things looked stressful on the outside, it didn’t convey to Beaumont, which is really the whole point.

“Anyone in my close team will think I’m pretty good at putting on blinders,” he explained. “I work on a need-to-know basis when I’m on the bike. There were quite a few different modules on the road this time around, with filming and logistics, but I’m just focusing on my work. In a way, it could be so overwhelming to have so many people here. If I didn’t have a coping mechanism for it, it would be a lot of pressure. Everyone is there for me. It’s an incredible amount of support, tremendous confidence in my abilities. This can result in pressure. But this is a very special project.

Beaumont’s record run was being filmed for a GCN+ documentary. The film will join a catalog of epic adventure and challenge films exclusive to GCN+, including Mark’s ‘Around the World in 80 Days’.