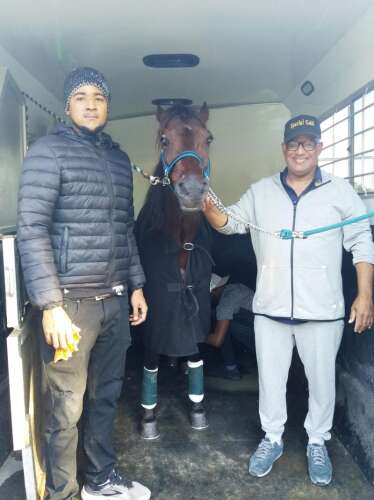 One of the fastest ponies on the island has been left out of the harness racing season opener this weekend at the Bermuda Equestrian Centre.

Special Gold, co-owned by father and son Lee and Sergio Raynor, will not be part of the field set to compete at Vesey Street Racecourse on Sunday.

“We’re not going to be there for the first race,” confirmed Lee Raynor.

“I wasn’t well for a while which set me back, and I’m a bit behind on the eight ball. I got sick and there are a few hiccups but we’ll get there.

” I’ll give it [Special Gold] a few weeks. I’m just doing a little speed work, nothing crazy, and taking it slowly.

Raynor’s pony caught the eye last season when he broke Big Red Machine’s 12-year-old stallion record when competing in the Free for All division with Kirista Rabain on a bike.

The blistering time was just a fifth of a second off the track record held by Tyler Lopes’ retired mare Google Me.

Two records fell last season as Martins family pony Double Time eclipsed the record of her own Bermuda-bred mare in the Free for All division with driver Candyce Martins at the helm.

Ahead of the start of the season, the Driving Horse and Pony Club released a statement looking forward to the 2022-23 campaign.

“The Committee is delighted to return to the track for our 2022-2023 racing season,” the statement read. “The first day of racing is scheduled for Sunday October 2, after 1 p.m. at the National Equestrian Center.

“For our first day of racing, we will be hosting fourteen of last season’s ponies and we hope to welcome more as the season progresses.

“We are hoping for a full season without any setbacks. Currently, there are no new riders or ponies on the current racing map, but we’re optimistic we’ll welcome some in the near future.

“We look forward to seeing the community and spectators on the track.”