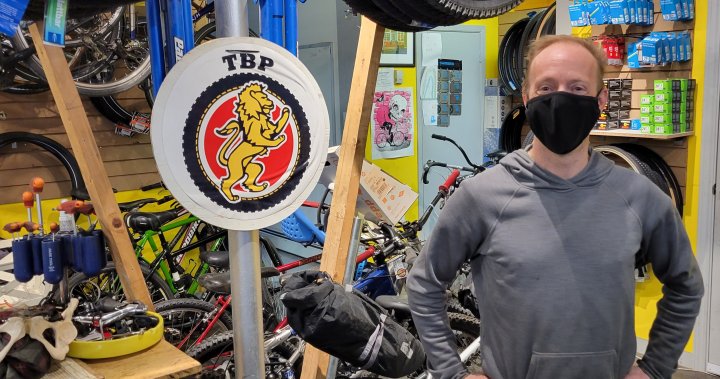 Experts say ever-changing gas prices may be prompting some Haligonians to turn to bicycles as a more reliable and affordable mode of transportation.

While the price at the pump won’t stay high for long, the massive spikes seen in recent days show just how volatile fuel costs can be, and the city’s bike shops are gearing up for an active season.

Andrew Feenstra, the owner of Cyclesmith on Agricola Street in Halifax, says it’s still early in the season and he hasn’t seen many influxes of customers yet, but he expects the things get “very busy” in the spring.

“Based on gasoline prices, that will kind of fuel the fire,” he said.

“As the price of gasoline goes up and people start to think about it a little more, I think we’re going to see a big increase.”

He said with March Break and the summer months ahead, more and more people are expected to start taking an interest in cycling.

“Bicycling is a fantastic way to leave your car parked in the driveway and get to work, pick up groceries, or pick up the kids from school,” he said.

“Whatever you use your car for now, you can probably replace it with a bike once in a while.”

It’s a similar story for Jenna Molenaar, owner of Halifax Cycles & Guitars, who said there’s “definitely been a lot of conversation” about buying a bike amid soaring oil prices. petrol.

She said she recently shared a post about the subject on the company’s Facebook page, prompting customers to visit the Kempt Road store.

Molenaar said people are interested in all kinds of bikes, but e-bikes in particular are very popular. While the store is running out of certain bike models, she said the store still has a “great selection.”

As gas prices remain volatile, Molenaar said now is a great time to buy a bike.

“It saves so much money,” she said. “I saved up for my down payment on my house when I was 32 because I chose to travel by bike and not own a car.”

Across the harbor at The Bike Pedaler in downtown Dartmouth, manager Sean Therien said they were about as busy as they normally would be at this time of year, but he expects it to resume next month.

“I wouldn’t say we saw a spike in activity because of gas prices. This kind of thing will probably happen in a month when people really start to lose their minds,” he said.

He said spring sales were starting to roll in and the store had had a busy week, but once the weather started to improve the number of customers coming “quadrupled”.

That’s when he expects most bike shops to go “full throttle” with repairs and sales – “no pun intended.”

Therien said his store doesn’t sell e-bikes, but gravel bikes are popular because of their versatile uses.

“In our area, we have so many wonderful trails to hike,” he said. “Gravel bikes are great for that.”

Although this influx is more related to health and wellbeing, she said she expects to see more people turn to cycling because of the cost.

“Rising gas prices are definitely going to be an incentive,” she said.

“(Bicycling) is definitely a considerably more affordable mode of transportation…Your primary source of fuel is yourself, so it’s certainly less subject to market fluctuations.”

Although riding a bike has a start-up cost to buy the bike and then the costs of maintaining it, they pale in comparison to the costs associated with owning a car – especially since the price of gas and oil can change a lot in a short time, as recently demonstrated in Nova Scotia and around the world.

Riopel noted that there is also a discount program for e-bikes, which are gaining popularity as a way to get around without a car, while dealing with the “bad” hills Halifax is known for.

“They’re so much fun to ride,” she said. “Literally you can walk up Citadel Hill and you feel like you’re on a boardwalk. It’s just glorious.

Still, there can be obstacles to cycling. Some people may feel unsafe due to a lack of cycling infrastructure such as protected bike lanes, and Riopel said more emphasis needs to be put on planning and infrastructure.

“People might be in a place where they want to make that change, but there are still some things they need, whether it’s infrastructure or access to a bike, or educational components,” he said. she declared.

Riopel is encouraged by initiatives like Halifax’s Integrated Mobility Plan, which aims to improve active transportation in the city. She also stated that, as stated in the Environmental Goals and Climate Change Mitigation Actthe province aims to have a strategy to increase active transportation options by 2023 and infrastructure completed by 2030.

“I would strongly encourage people to start incorporating cycling into their lives,” Riopel said.

‘A great thing you can do for yourself’

Meanwhile, Halifax’s bike shops continue to prepare for what promises to be a busy spring.

Paul Rogers, owner of Long Alley Bicycles on Quinpool Road, said he expects the season to be a ‘madhouse’ with many people clamoring for bikes.

“With gas prices, people are going to want bikes,” he said.

He said his biggest challenge was supply issues and he hadn’t been able to get e-bikes in stock.

Rogers said outdoor activities have grown in popularity during the pandemic, although he said there was “never a bad time” to opt for a bike ride instead of a car.

“I might be a little biased, but I also think it’s a good thing you can do for yourself,” he said.

“And you can save a few bucks – or more than a few, these days.”