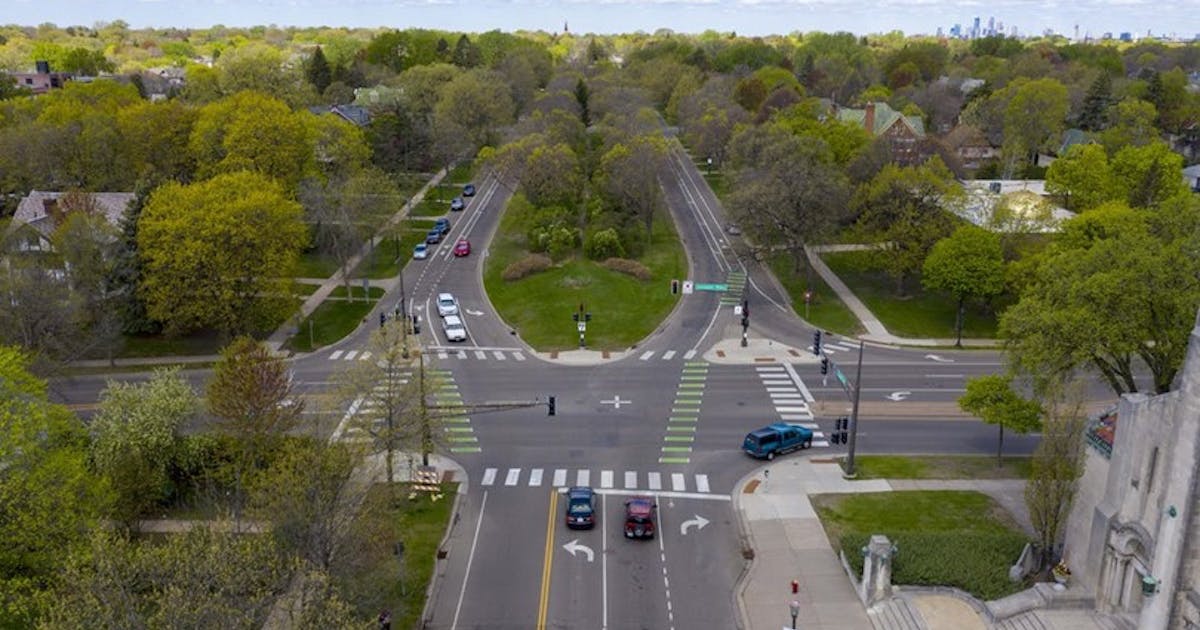 It will be months before a master plan outlining a proposed regional trail on St. Paul’s Summit Avenue is completed. And it will probably be several years before the construction of a protected cycle path begins.

However, the opposing camps have already taken a stand. A contest of hearts, minds and funding has begun between those who see a new trail as necessary for safety, connectivity and accessibility and those who, while wanting Summit’s bumpy sidewalk smoothed out, would prefer the mansion-lined street to remain as it has been for over a century.

Over the next month, municipal authorities will collect public comments for the kind of residents of the Summit Avenue area want to see. At an open house that planners held at Hidden River High School on Thursday, visitors — some in street clothes and some in bike gear — reviewed the the progress of the trail plan so far.

There is no direct off-street connection between the Mississippi River Boulevard Trail and the Sam Morgan Regional Trail along Shepard Road. A regional trail on Summit Avenue could create an off-street option through downtown for pedestrians and cyclists of all ages and abilities, officials said.

Officials are working on the master plan, funded by state money through the Metropolitan Council. There is no money planned for construction yet.

A completed master plan would allow the city to apply for financial assistance to build a trail along the five miles of Summit Avenue. Andy Rodriguez, director of parks and recreation for St. Paul, said a trail is at least five years old.

Karen Allen, who lives in the Midway area, said she supports a separate bike path down Summit.

“Security. Connectivity,” she said. “In terms of the east/west connection in our city, it really is the best choice.”

But Christopher Keith, a local historian who lives in the 300 block of Summit near St Paul’s Cathedral, said a new bike path in the corridor, which already closes each year for the Twin Cities Marathon, “looks like another hurdle for us.”

Keith said he was concerned about the potential loss of trees, parking and the historic street’s century-old granite curbs.

“I’m all for making Summit more accessible,” he said. “I don’t think that’s it.”

According to preliminary city plans, Summit Avenue “has been an important civic thread for recreation and transportation since its inception in the late 1800s.” Distinguished by boulevards and architecture stretching from Mississippi River Boulevard to downtown St. Paul, it is filled with walkers, runners and cyclists daily.

Parks and Recreation staff say a new regional trail could be a safer way to connect Summit to the Sam Morgan Regional Trail than the current painted bike paths. Traffic on Summit ranges from 3,500 to 11,000 vehicles per day. City officials say federal, state and local industry standards require separate bike lanes when the average number of vehicles per day exceeds 6,500. Between 2012 and 2021, there were 31 crashes involving cyclists on along the corridor, most resulting in injury or death.

Those descending Summit can’t help but notice the proliferation of miles of Save Our Street (SOS) signs in the front yards. For months, residents opposed to a trail have been building a case against major changes to one of the city’s most attractive and heavily used corridors.

Residents have decried the process and complained that planners have not seriously explored alternative routes for an east/west connection.

In an August letter to city officials, Marilyn Bach wrote, “We urge the City of Saint Paul to slow down – to allow meaningful public input and to address this issue with transparency and the data-based care that ‘he deserves.”

Dan Marshall, who bikes to Summit every day, said a separate trail was badly needed. He was hit by a car while riding in the painted bike lane, he said. In the current state of the street, Marshall says, he doesn’t dare invite his mother for a ride down the historic avenue.

In addition to making the road safer for cyclists, a separate regional trail would serve as “an amenity for Summit Avenue that would just make it easier to visit, more appealing,” said Marshall, who owns a toy store on Grand Avenue, one block south of Summit.

But Kent Treichel, who wore his cycling gear to Thursday’s open day, said a separate regional trail was a “terrible idea”.

While Summit Avenue should be smoother and get more attention from Public Works, he said, its role as a must-see bike path is already strong. Painted lanes do the job, Treichel said.

“I don’t know what problem they’re trying to solve,” he said.