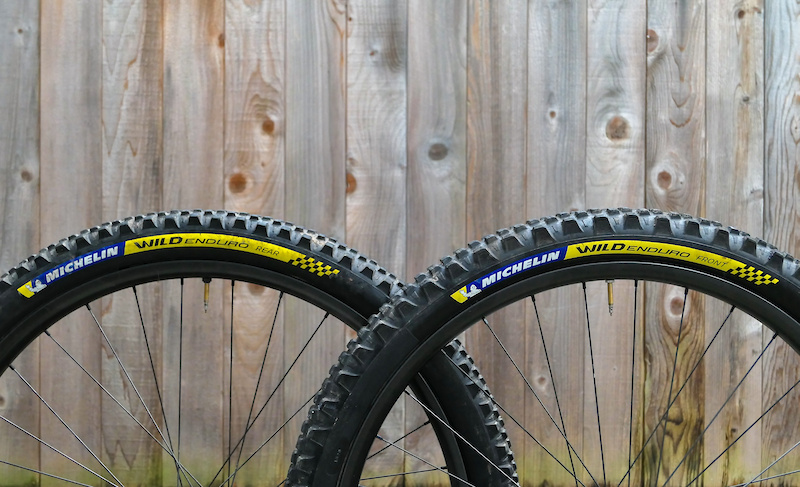 Michelin has slowly expanded its mountain bike lineup in both directions, and the lineup now includes everything from rugged e-MTB options to featherweight cross-country tires. Lately, they’ve been hit the spotlight with success by freeriders like Carson Storch and Cam Zink, to name a few, as well as gravity teams GT Factory Racing and MS Mondraker. We’ve even noticed some teams blacking out their tires for specific conditions, which says a lot when top riders choose them without any obligation.
Wild Enduro Racing line details

You might recognize these treads from the Wild Enduro series, but the flashy blue and yellow hot patches dictate the “Racing Line” version, which features technologies designed for the rigors of downhill, e-MTB and enduro racing. This means that the toughest casings weigh about 150 grams more than the “Gravity Shield” casing that has been around for some time. At the moment the Wild Front/Rear Racing Line combo is only available as a 29″ x 2.4″ option and their weights measured 1459 and 1350 grams respectively.

Another brand, another tire nomenclature to decipher. This time, Michelin brought together the compound, support and puncture resistance of their downhill tire construction while borrowing the tread patterns previously found on the lighter Wild Enduro options. All blue and yellow Racing Line tires use Magi-X DH compound, which is very similar to Five Ten’s Stealth rubber – it’s firm, but sticky.

You might mistake the Wild Enduro Front for a mud spike, and it’s not far off. It is designed to be versatile in all conditions and to clear debris. While the Wild Enduro Rear features a similar shoulder knob, grip in the center of the tire is optimized to restore rolling resistance. Michelin’s star-rating scale places the rear tread in this pair as the fastest-wearing tire due to the time it will take to burn through the shorter center blocks.

Construction technologies include a “Down Hill Shield” aimed at deterring sidewall tearing and a 4-ply “Double Defense” layer. Along the top is a high-density puncture protection sheath to ward off sharp objects that might get between the tread blocks. Additionally, the sidewalls feature reinforcement that tapers upwards from the heel along the sidewall to prevent pinching and add stability under low pressures.

The Wild Enduros tires were installed on the Bontrager Line 30 Carbon wheels without much struggle or the need for tire levers, despite the plastic rim strip that can make other tires difficult to mount. The tires popped into the seat at pressures of around 30 psi with just a standard pump. Some bent tires can lose air like a leaky sieve, but that was not the case with Wild Enduro, even after two more swaps with different axles.

In terms of sizing, I took the good advice of leaving the tires inflated to a higher pressure of 45 psi for twenty-four hours to allow them to fully stretch to their full capacity. After that, the front and back, despite looking smaller, are 2.4″ wide across the case and 2.5″ from edge to edge.

Immediately, the effort required to turn these tires over on pavement due to the weight and sticky compound is noticeable. You can feel the tank track-like tread turn knob by knob; Granted, testing mostly took place in the back half of a wet, cold fall.

A quick tear in a set of concrete stairs revealed the high level of cushioning provided by both the slow rebound rubber and the thick casing, even on a 24kg eMTB. That square, open tread and supportive casing looked promising once things headed downhill on the trail.

After the first ride in a mix of sloppy organic dirt and mud-covered bedrock, you could have been fooling me if you said these Wild Enduros were filled with tire inserts. Grip levels were adequate with pressures close to what I would do on a bike without the added weight of a motor; 23 psi in the front tire, 26 psi in the rear, but the support was next level. I gradually lowered the pressures over two laps and my confidence in casing security and tread traction increased.

Typically, a tire with such an open tread doesn’t perform well on bedrock or roots, but the Wild Enduros were predictable in those scenarios. The front features similar mud-shedding qualities to the Schwalbe Magic Mary, however, finding the shoulder knobs was an easier task. There’s a ton of bite in those shoulder buttons and when the right presses are found the case feels stable and doesn’t feel flimsy. They are wild diggers when you put them to the test in soft ground.

That means you have to lean a little harder to corner on hard-packed dirt. They are consistent when you steer the bike, but have an earlier breaking point. Compared to something like a Maxxis Minion DHF on the same 30mm rims, you need patience in firmer ground, letting the shoulder knob hit the ground and weighting the dropout to sink in slightly in the case. Only then can you push further into the turn, otherwise you may start to slip if you are overzealous.

The transition from center to shoulder knob on the rear tire is not as drastic as a full semi-slick. You need to be careful when braking on the trail, as the rear tire can sometimes build up with organic dirt. In bad weather, Michelin suggests doubling the Wild Enduro fronts and using it on the rear wheel for really muddy conditions. This is exactly what Martin Maes did during the EWS in La Thuille, but I never felt the need to try this option, given the amount of sand in the soil of the Côte-Nord. The front-wheel grip was able to handle the majority of hard braking, while the Wild Rear remained sufficiently consistent and allowed me to perceive awkward spots where it might break free momentarily. I’d be happy to take any relief from the faster, lower tread on the rear tread that I can get.

Firm, heavy, slow, sticky, open, mixed rear tread – who are they good for? Electric cyclists, cyclists who flatten frequently and those who frequent demanding trails with easy vertical access. They conform much better in hot weather, like most other tires, but the Wild Enduro Racing Line in particular is firm enough to handle heavy loads at low pressure without the carcass or tread moving.

At slower speeds on a traditional bike, with end pressures hovering around 18 psi in the front and 22 in the rear, they feel over-damped. The feeling of hardness is amplified by the cold and can prevent you from moving forward on the bumps of stuttering. I even had to modify my suspension settings by decreasing the spring force and opening up the shock to compensate for this. As a constant tinkerer, I wonder what a slightly larger volume could do to overcome this trait. The rugged four-ply carcass might be the only mountain bike component to have a minimum Weight Limit.

There is, however, something to be said for their durability. “I haven’t had a puncture yet” are the famous last words, but I’m confident I could ride the Wild Enduro Racing Line tires with no pressure and still get home in time for dinner anyway.

So far, all the buttons have worn evenly – they’re just starting to show signs of wear, but none of them have come off unexpectedly yet. There are signs that the rear tire lugs are beginning to crack slightly along the base of the outer edge. It’s nothing out of the ordinary for the amount of aggressive riding they’ve been subjected to, though the brutality of several days in a dry bike park might say otherwise.

They also held their form very well after a few setups and there was a horrible case on a big log gap jump. Not only did the tire survive, it did not lose air and showed no signs of impact. Fortunately, no rims were damaged during this test session.

A friend jokingly asked how these “car tires” performed on the track. I wasn’t sure if it was a reference to the history of the brand or if he had listened to the weight penalty incurred by the Racing Line duo. Michelin is transparent and lists the weights of all their MTB tires, which is not the case for some products known to tip the scales. The front end weighed 1459 grams, a bit more than the claimed 1400 grams. Meanwhile, the rear came in at the quoted number of 1350 grams, almost exactly the same weight as the equivalent 29-inch case options of a 2.4-inch Schwalbe Magic Mary.

It is what it is, so if you’re worried about weight and don’t need durability, Michelin offers other front and rear Wild Enduro tires with a Gravity Shield that are about 150 grams lighter per end.

Price aside, you’re unlikely to throw away a cut Michelin Racing Line tire after a ride. Listed at $99 USD, this combo is in line with other high-end choices for World Cup and Enduro World Series competitors where the trade-off between high wear and all-around traction is paramount. A 3CG Maxxis Assegai hovers around a similar dollar figure and wears at a similar rate, in my experience between these tires.

– The bracket comes with a hefty weight penalty
– Magi-X DH compound rolls painfully slow
– They can feel too cushioned and harsh, especially in colder temperatures