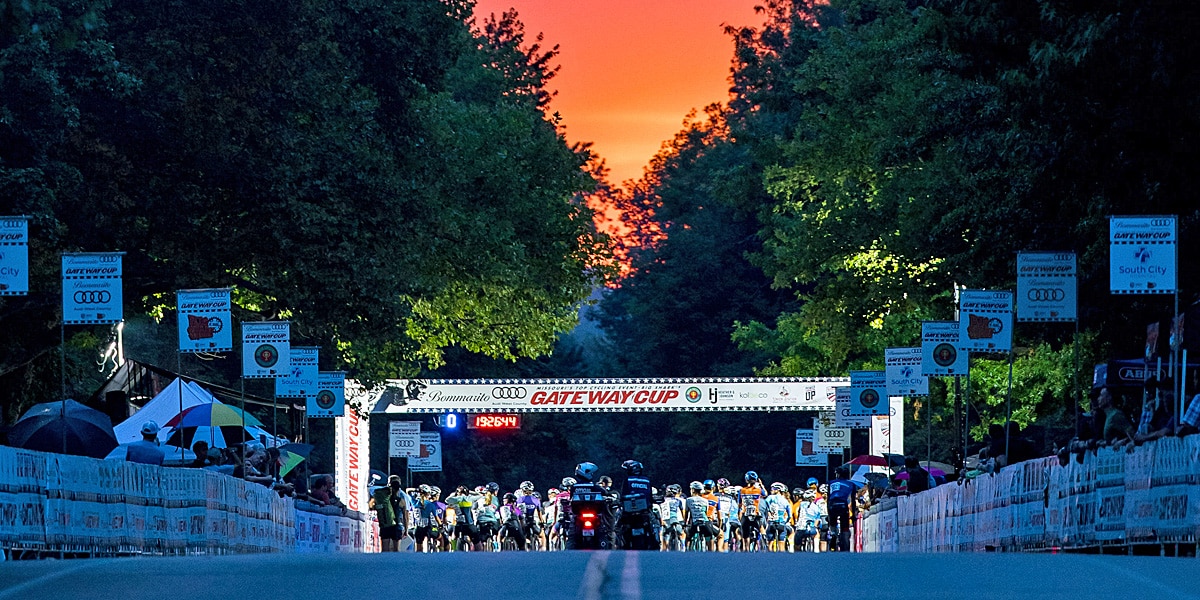 In the US racing scene, spring brings stage races and summer brings criteriums. For 2022, a new American Criterium series has emerged, the American Criterium Cup, ACC for short, with live racing from across the country. All ten rounds of the series are existing premier events that have earned a place on everyone’s calendars and are now integrated into a premier series supported in part by USA Cycling, the sport’s governing body.

The Bommarito Audi Gateway Cup, the final round of the ACC series, is an unmissable criterium series taking place over Labor Day weekend in early September. As these races have been held since 1985, the locals know the score in terms of cycling. They support the cyclists who invade their city. The organizers are led by a certain Mike Weiss, founder and owner of local bike shops called Big Shark. Mike and Co. have, in essence, trained locals in cycling over the decades and those locals have come out in force. The effort put in by Mike and his team to put on this flawless series of races is impressive. Cycling needs more people like Mike Weiss. 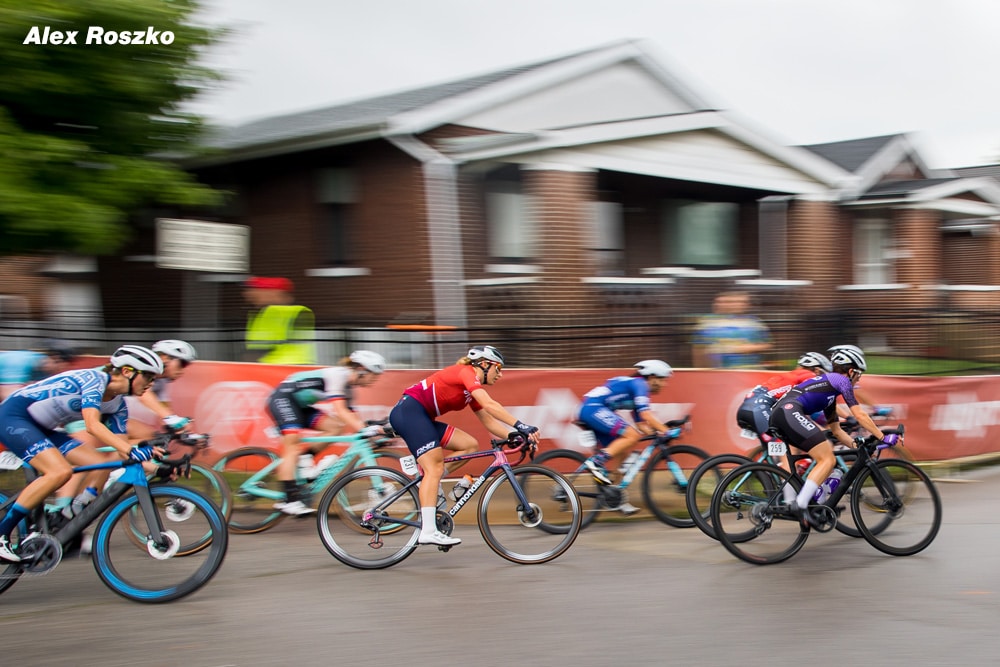 Spoiler alert: The final event in the national crit series was the Giro Della Montagna, held on Sunday, where new 2022 series women’s champion Maggie Coles-Lyster of DNA Pro Cycling capped off a great season. Here’s Maggie, center, wearing the series leader’s jersey. She probably thought “all i have to do is stay up”. 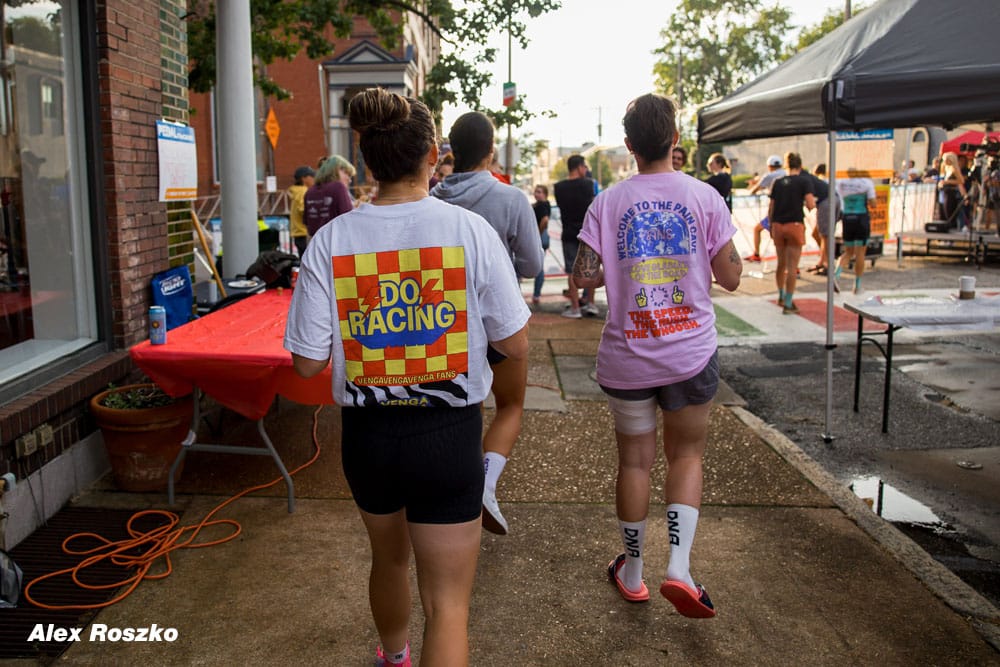 Here’s Maggie blending into the crowd after winning her championship. Note her teammate Kim Lucie, who was on deck two days earlier due to slippery conditions. 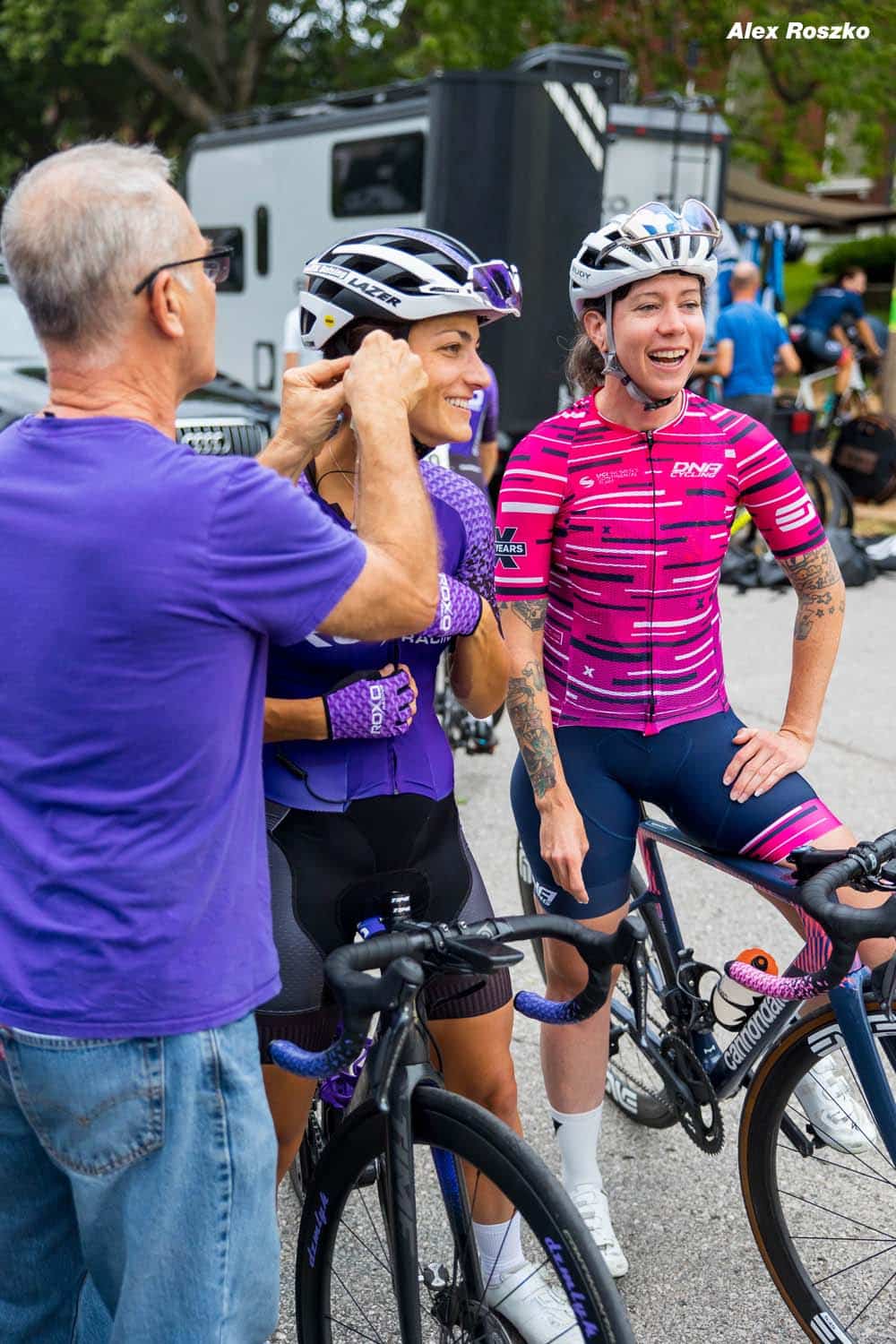 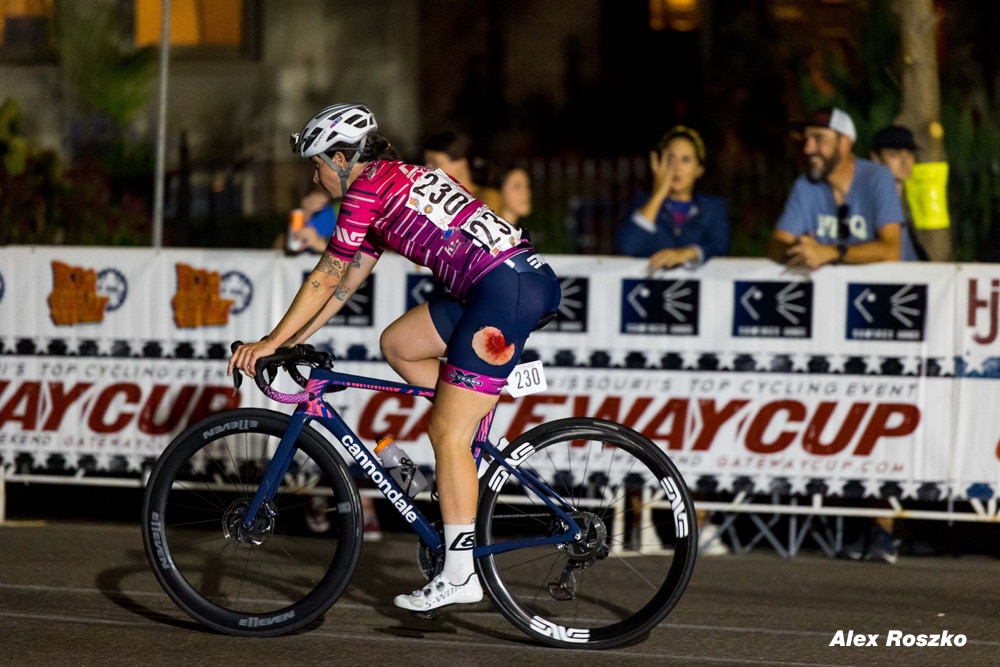 To back up our story, the four-race holiday weekend began Friday night with the Tour de Lafayette, a square 0.9-mile course circling Lafayette Park in St. Louis, not far from Gateway Arch State Park, bordering the Mississippi River. With rain forecast all weekend, the wet Friday course contributed to some drama in several races, including the first women’s event. Here’s Kim from DNA Pro Cycling, after donating her skin to the cause. 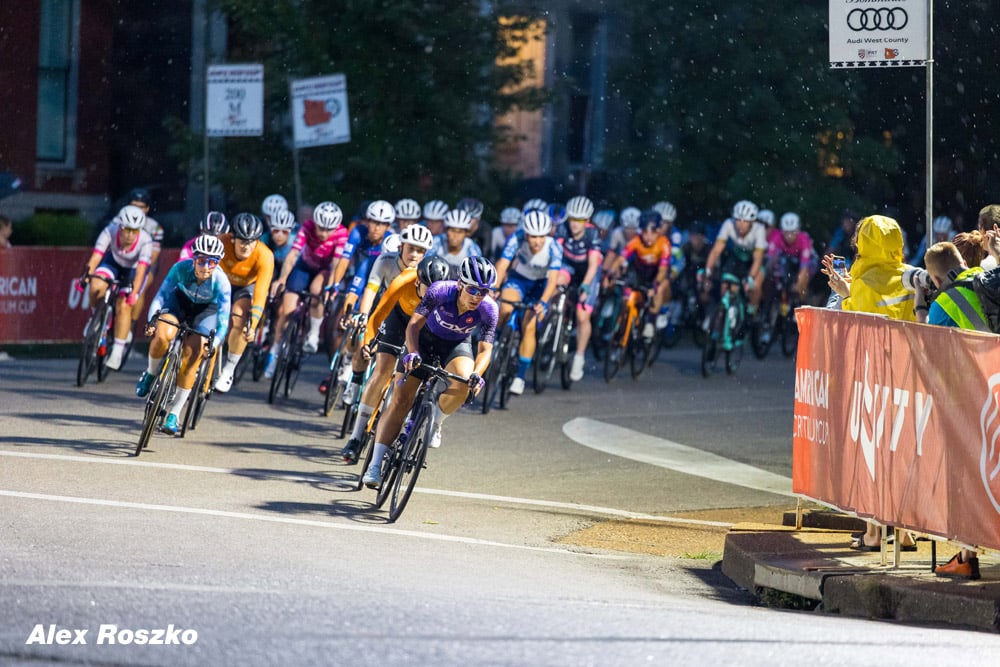 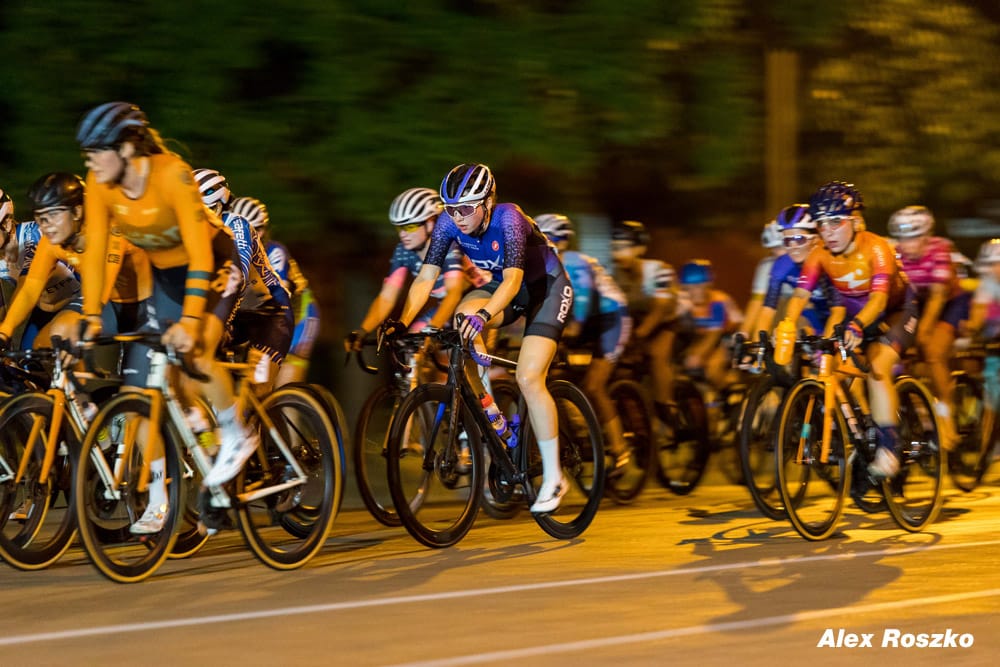 It takes many puzzle pieces to field a cycling team, including equipment sponsors. We are lucky enough to use glasses from Rudy Project, with photochromic lenses to adapt to low light situations. Notice Sommers here, in the rain, followed by Kaia. Sommers notched a hard-fought 11th on the night. 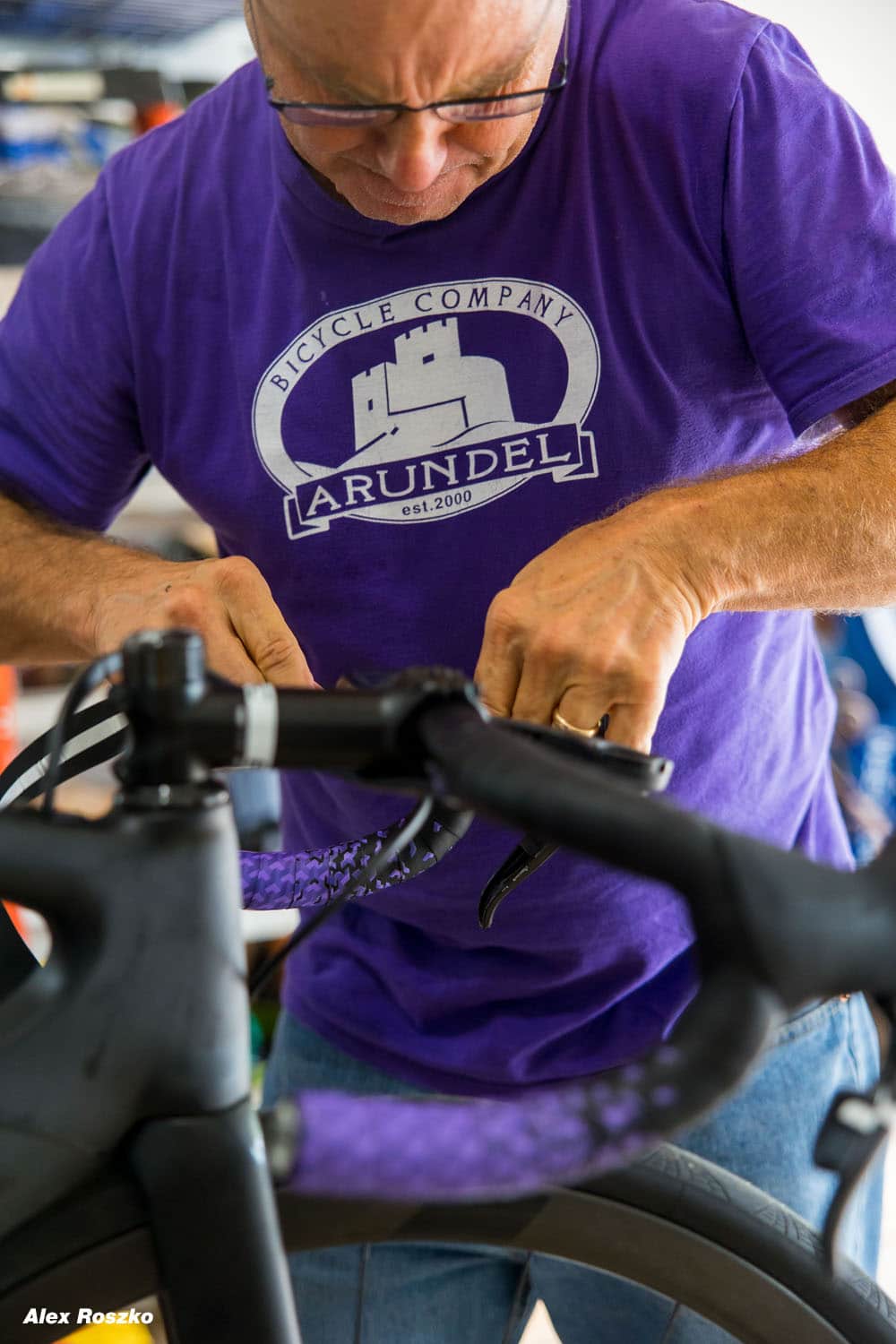 Our Saturday criterium took place at the end of the afternoon in the magnificent Francis Park, named after the organizer of the 1904 Universal Exhibition. Roxo Racing’s guest rider for the weekend, Jacqueline Larouche, doctoral student in Regenerative Medicine, received for the occasion the correct love sponsor, handlebar tape and bottle cages. 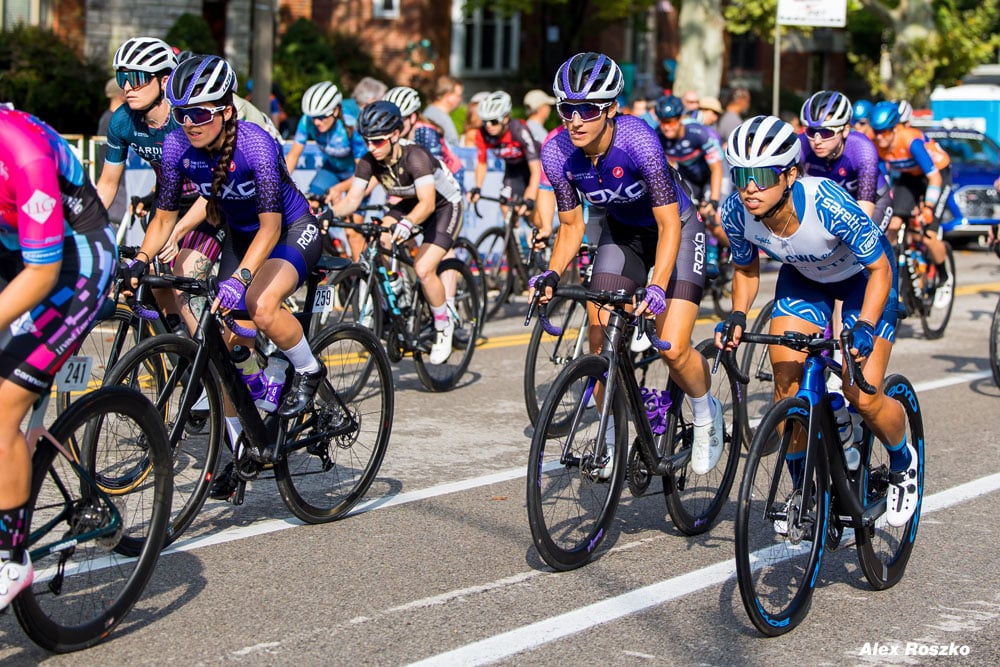 Jaqueline on the left, Hanna in the center and Sommers on the right. 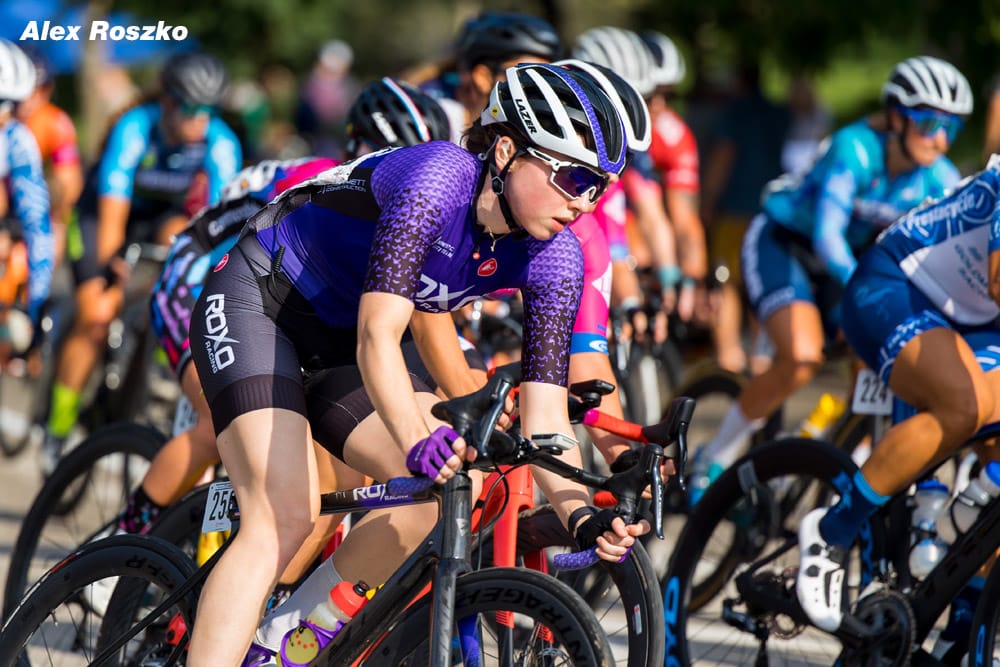 Our plan for Saturday, in the event of a sprint showdown, was to go all-in for Sommers. 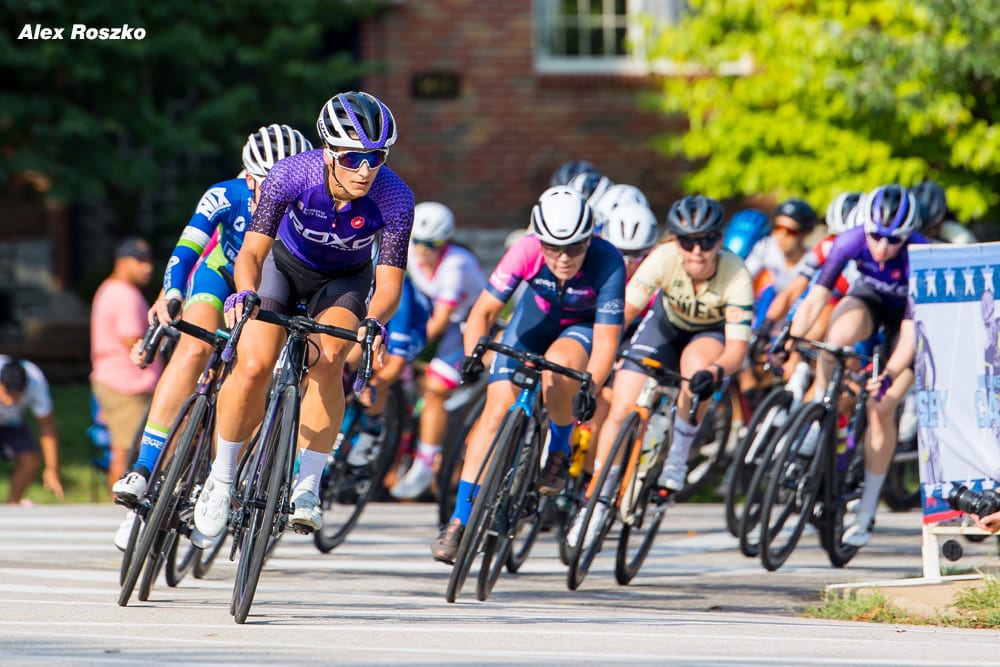 The plan meant that our riders, here Hannah, had to keep the pace from slowing down in the final. If this happens and the pack invades the front, chaos ensues. Sprint chaos is best avoided when you have a big closer like Sommers. 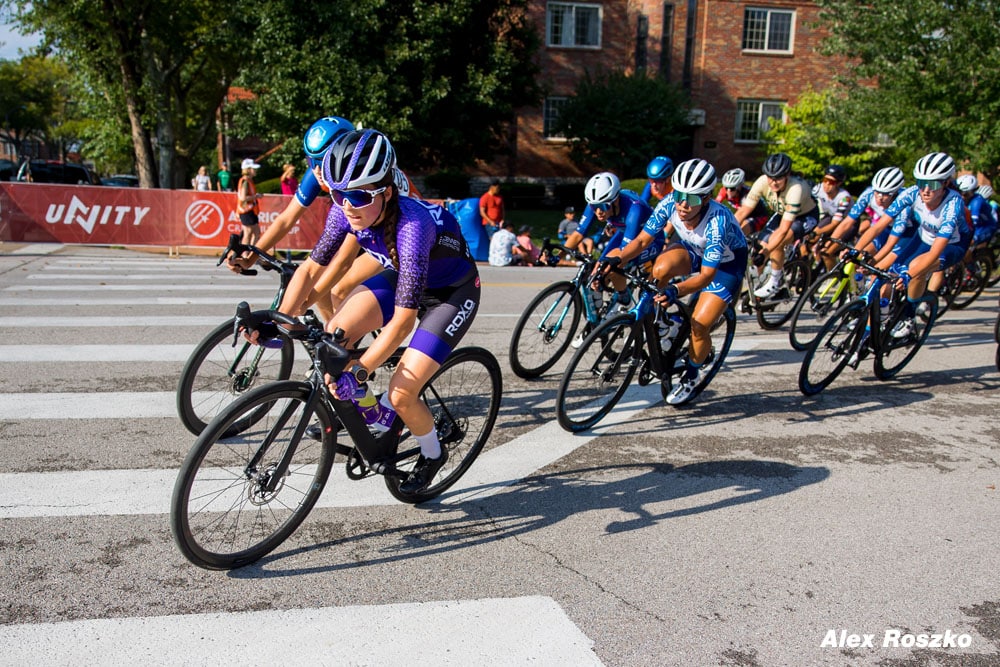 Our guest Jacqueline was not afraid to work for a teammate. She spent quite a bit of time on or near the front over the weekend. A former kayak paddler, Jacqueline took up cycling and quickly rose to the top spot. 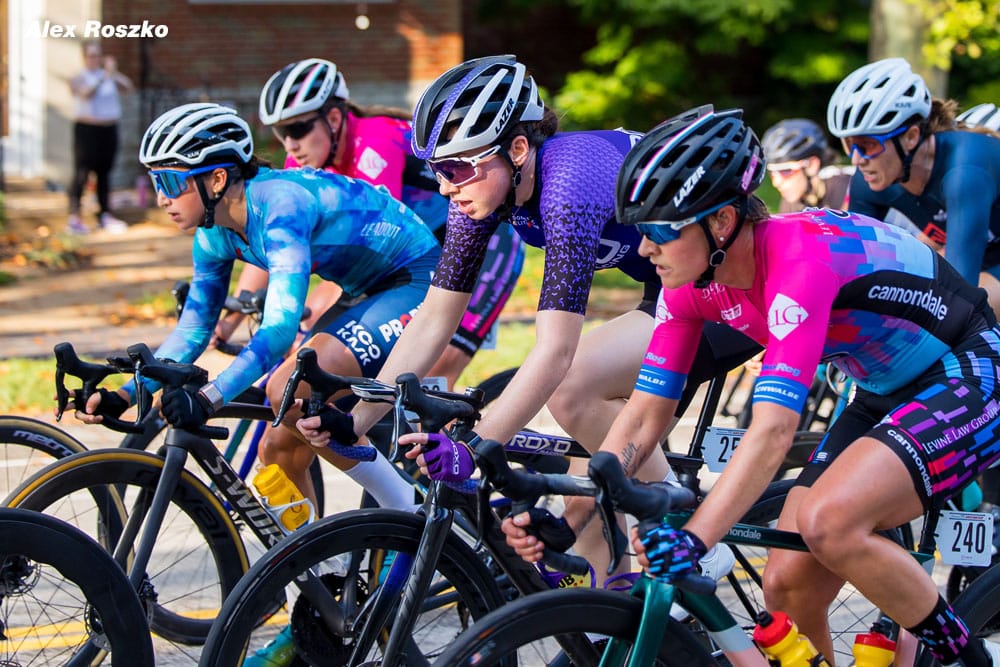 The problem with our awesome plan was that everyone else had a plan too. Towards the final, we watched a group of four wide races. On the final lap, the grumpy DS heard the radio crackle “Summers down!”and several runners battling close together crashed with her. 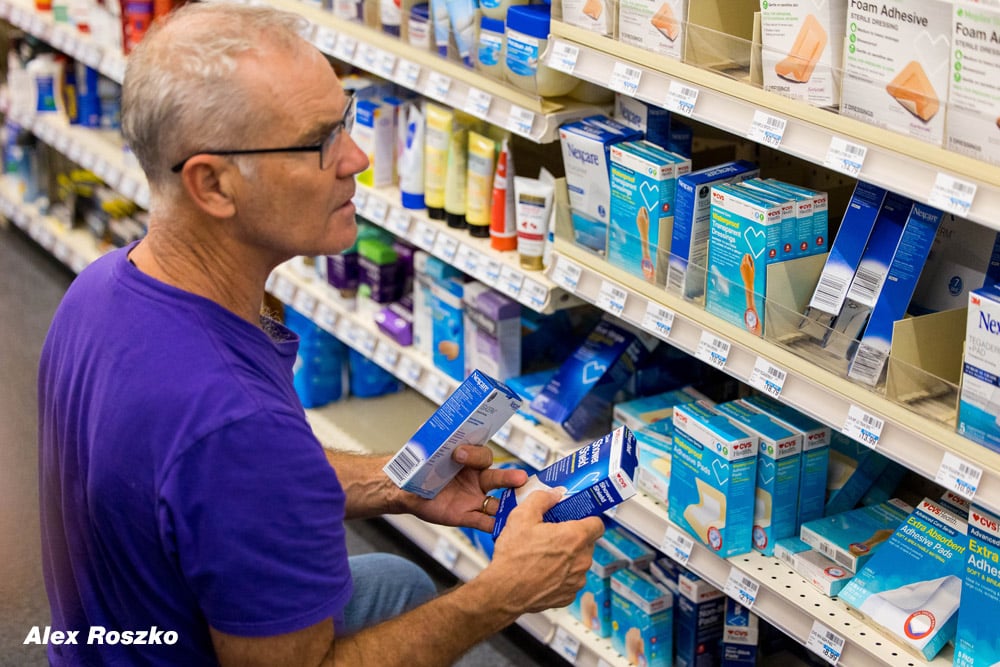 The crash meant tense times for riders and staff to check on his condition and assess our next move. The other runners in the heap were less fortunate. Later, a trip for supplies to treat his wounds. Sommers was going to have a rough night, waking up every time she moved the wrong way. The bicycle can be an indifferent bed companion. 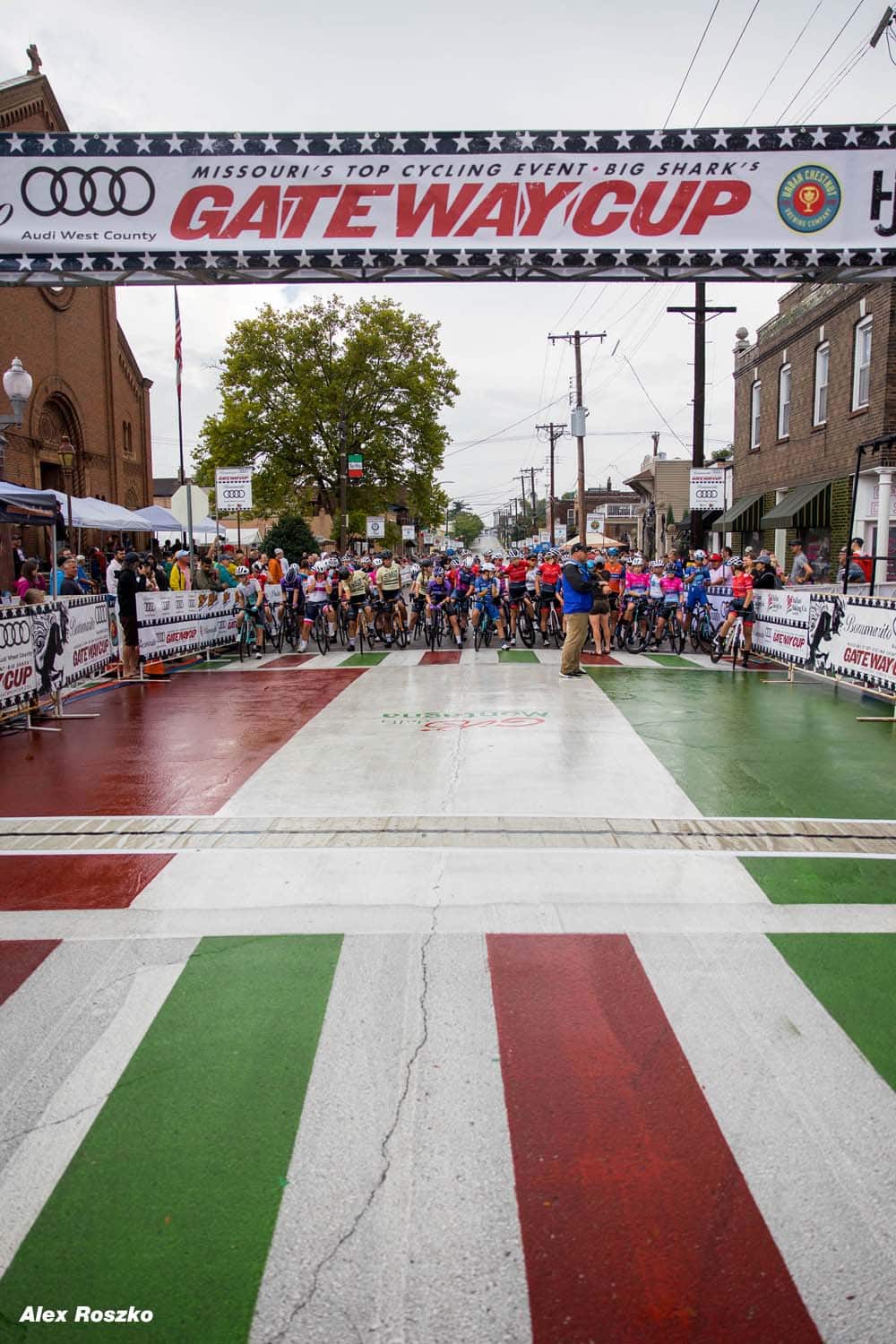 Day 3 was the final round of the American Criterium Cup on a course called the Giro Della Montagna, or “written on the hill” in our language. Italian is legit, as this historic St. Louis neighborhood is the traditional enclave of Italian immigrants dating back to the 1800s. Spoken Italian is as common as English. Baseball legends Yogi Berra and Joe Garagiola grew up here. It’s cool and the food is the best. 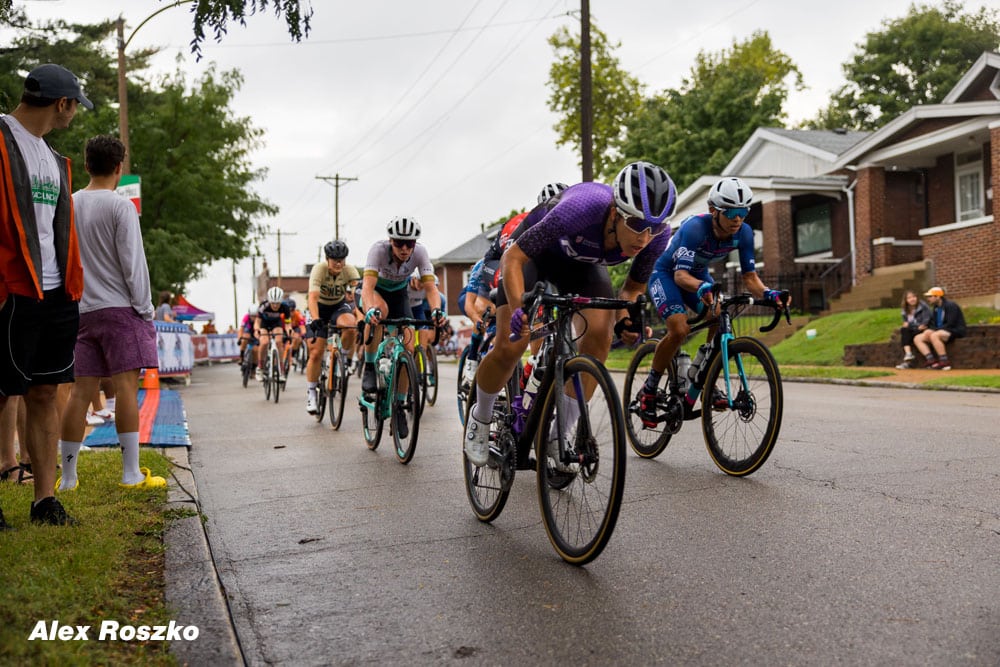 Michelle digging in, throttle wide open in a tough, slippery ride that led to high attrition. 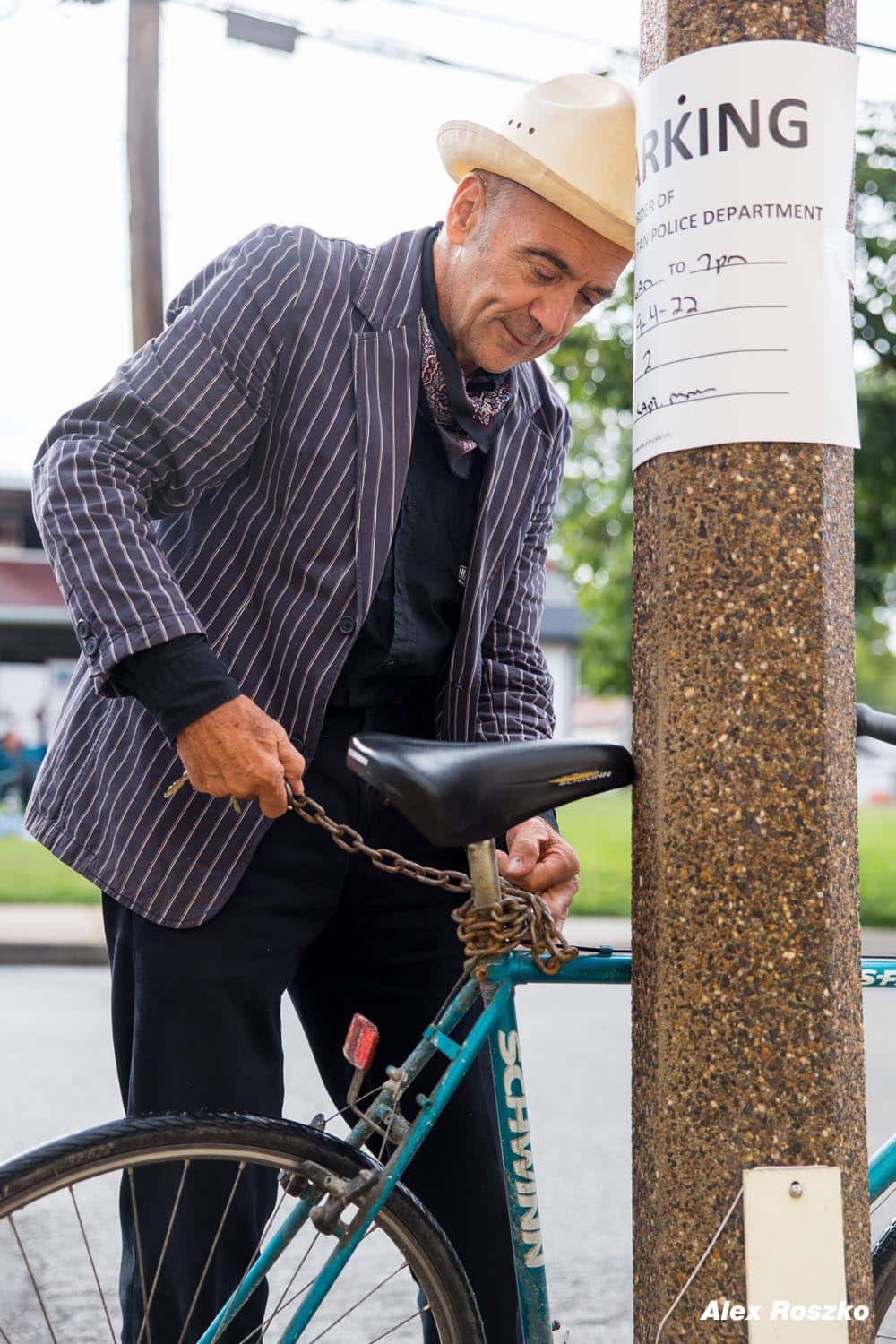 A local gentleman, who arrived on a bicycle to support the festivities. 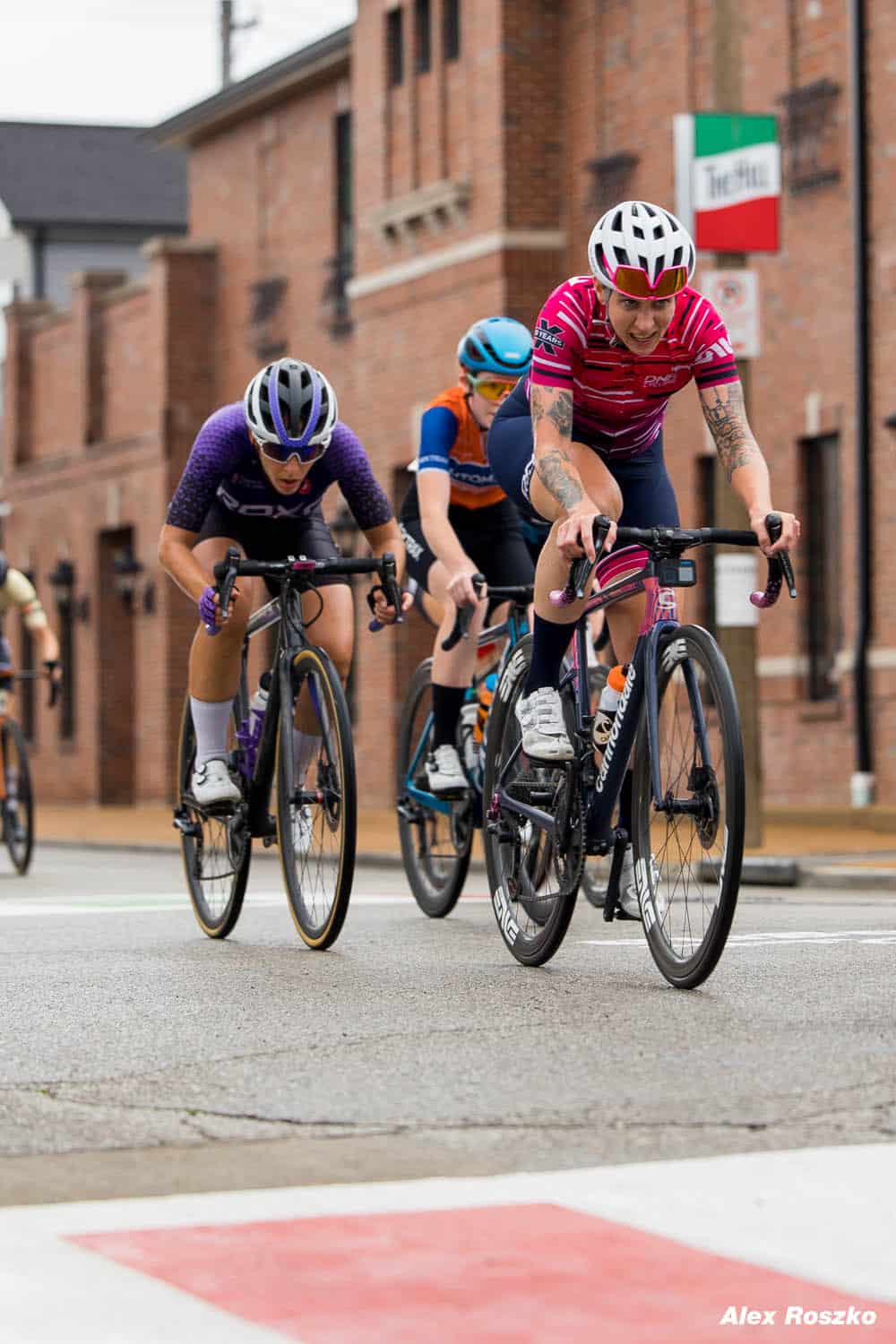 Michelle still has the throttle pinned, after Kim Lucie, who rides for Coles-Lyster, who ultimately won the championship. Maggie won the series thanks to her durability, determination, teamwork and a boatload of talent. Hats off, Maggie! 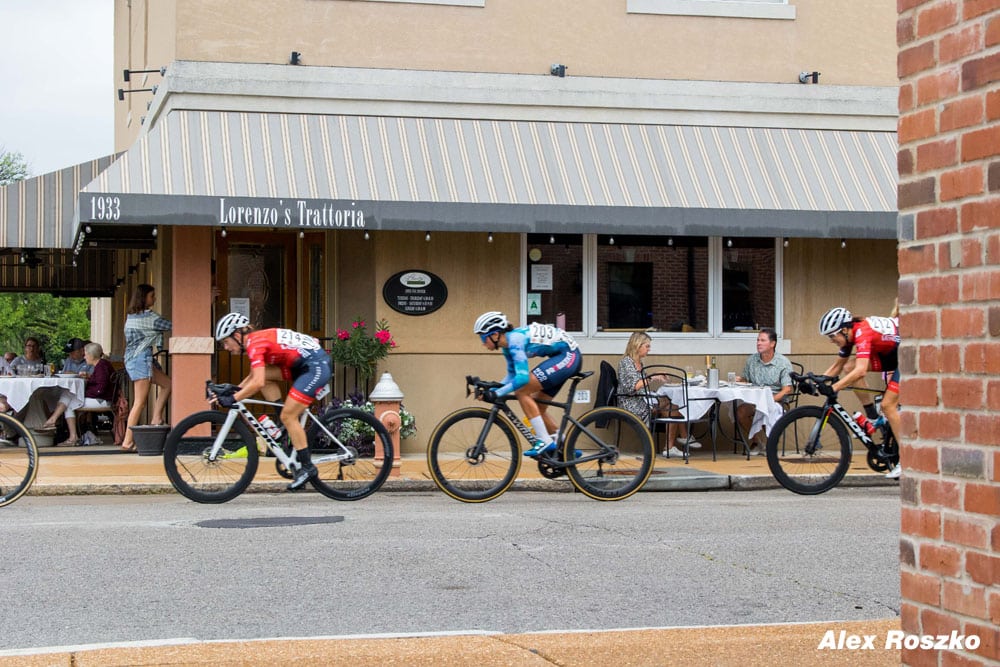 Even with the rain, locals enjoy conversation, food, drink, and biking. 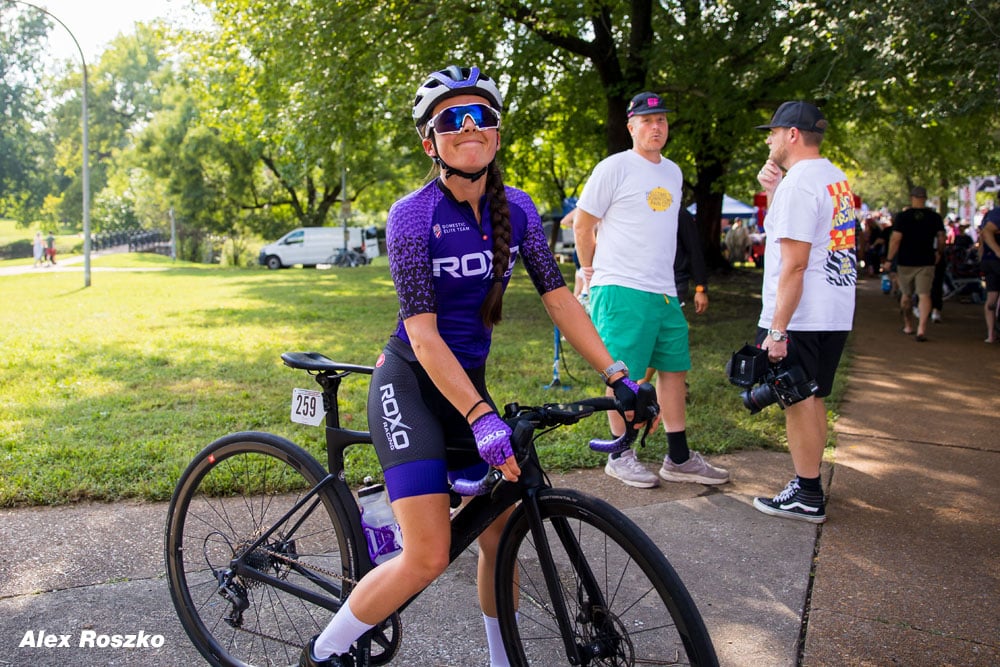 The fourth day brought sunshine and smiles. Jacqueline was ready for the final race of the series, the Benton Park Classic. Benton was Missouri’s first senator and his namesake park and surrounding areas border the Anheuser-Busch “Campus”a very large beer factory. 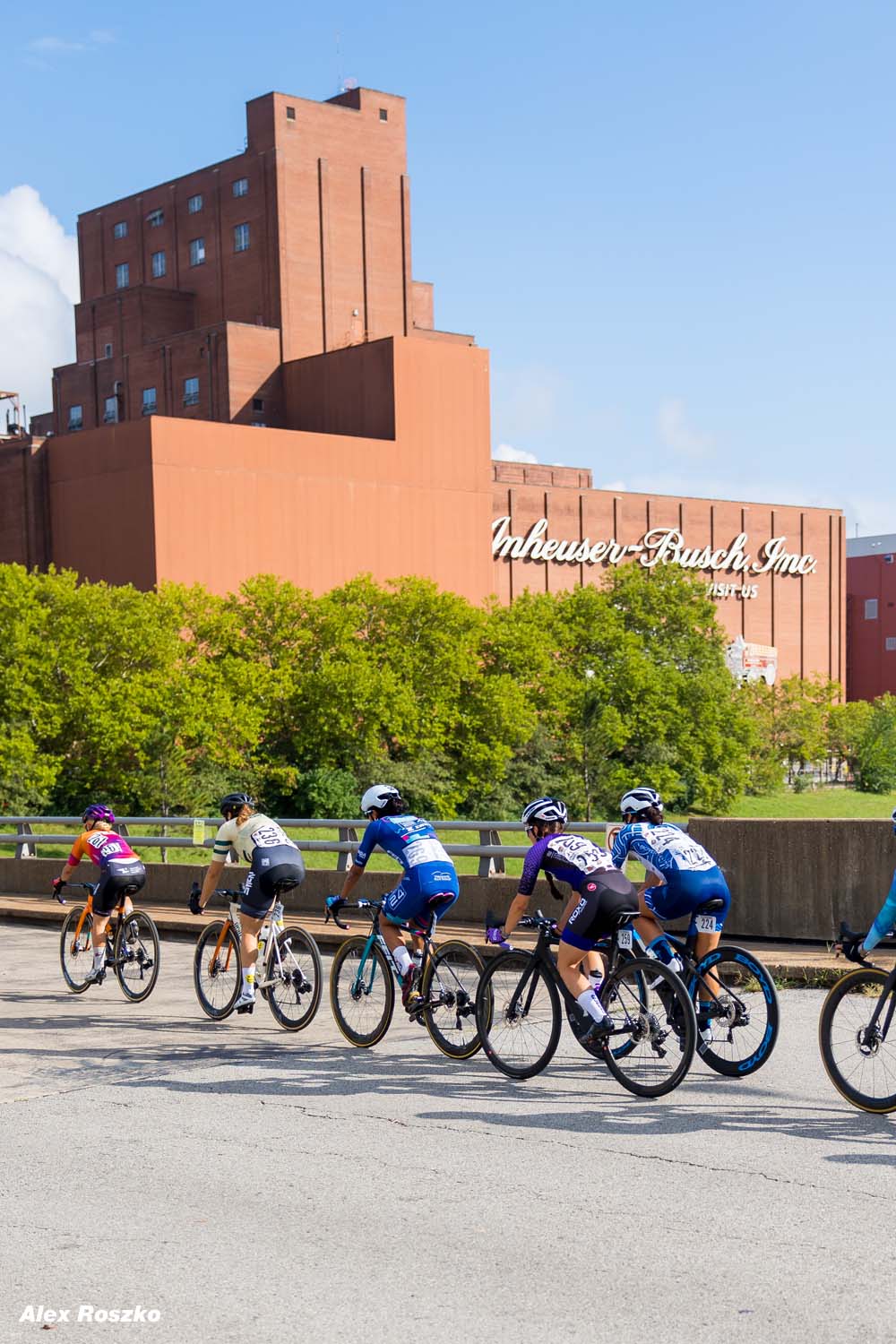 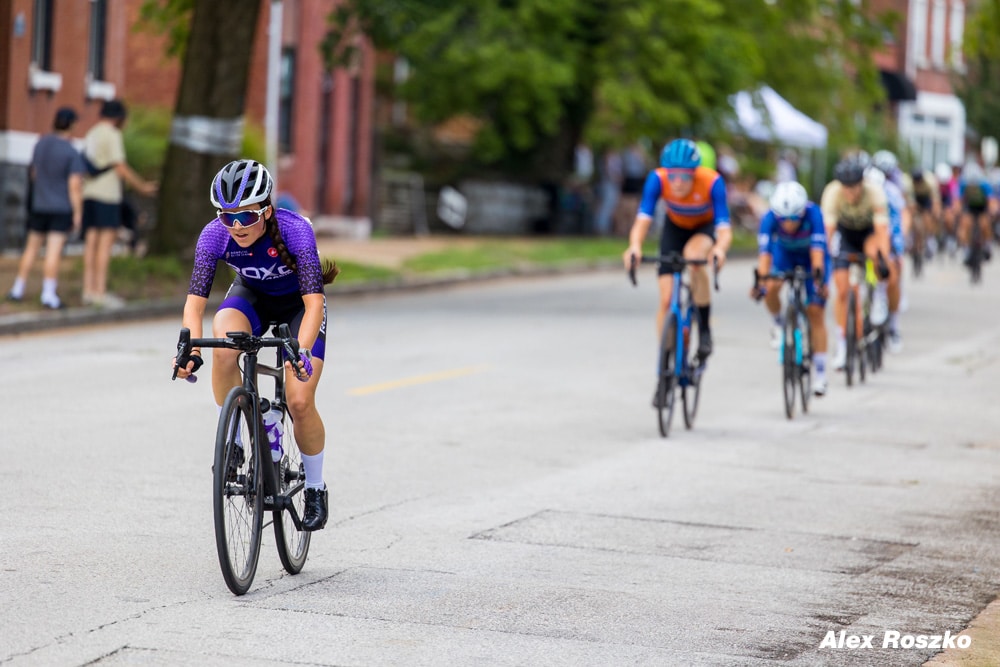 Like the day before, Larouche was in an offensive mood. With a field loaded with talent, other teams were ready to chase it all down, which helped keep the selective race together. 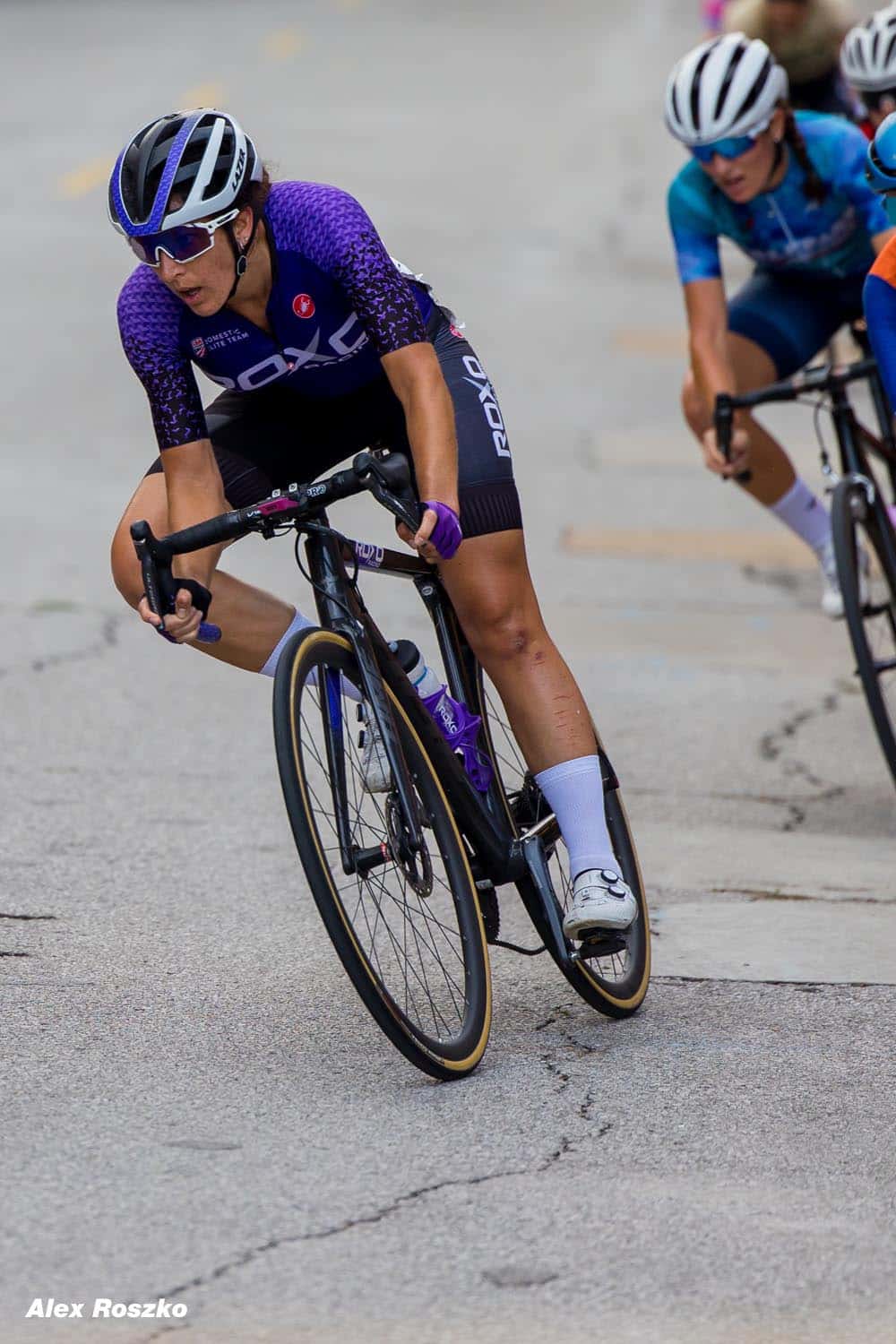 Michelle at high speed. Michelle’s run is a family travel affair with her husband, in-laws, children and dogs. 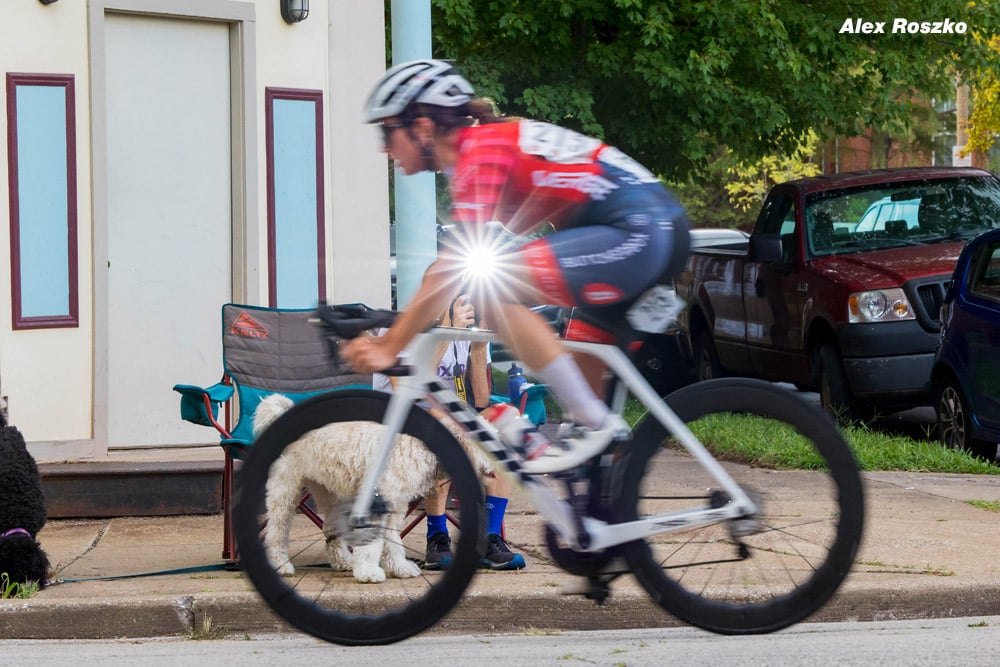 Our photographer Alex captured Michelle’s husband Brett, an accomplished runner himself, taking pictures of cyclists while running the zoo. 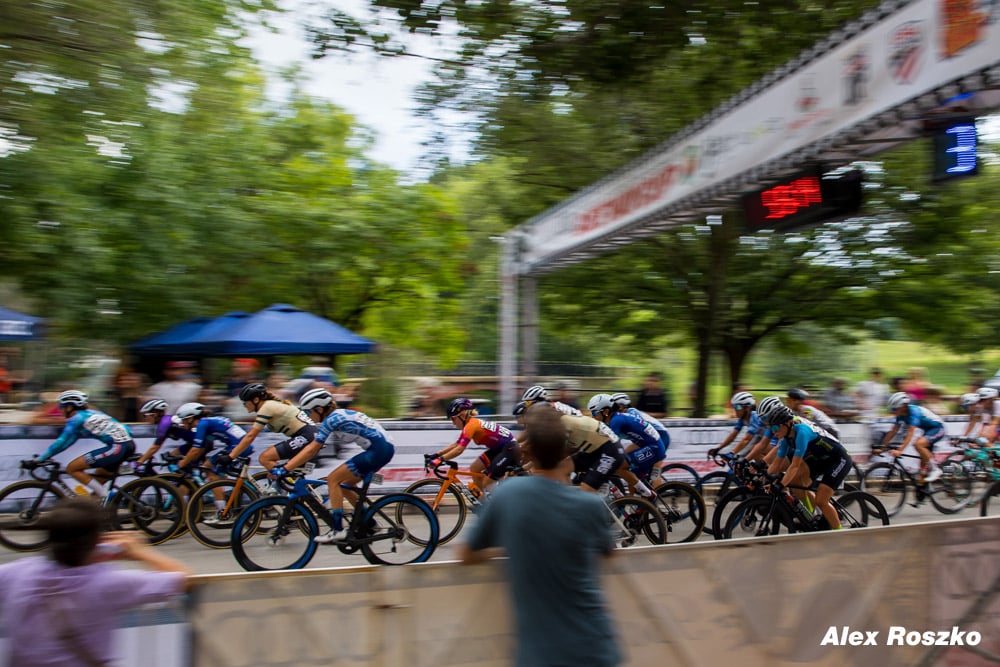 Three more and the sprint will soon be over. Virginia’s Blue Ridge TWENTY24’s Marlies Mejias Garcia battled her way to victory in the sprint, as she had the previous two days (!). 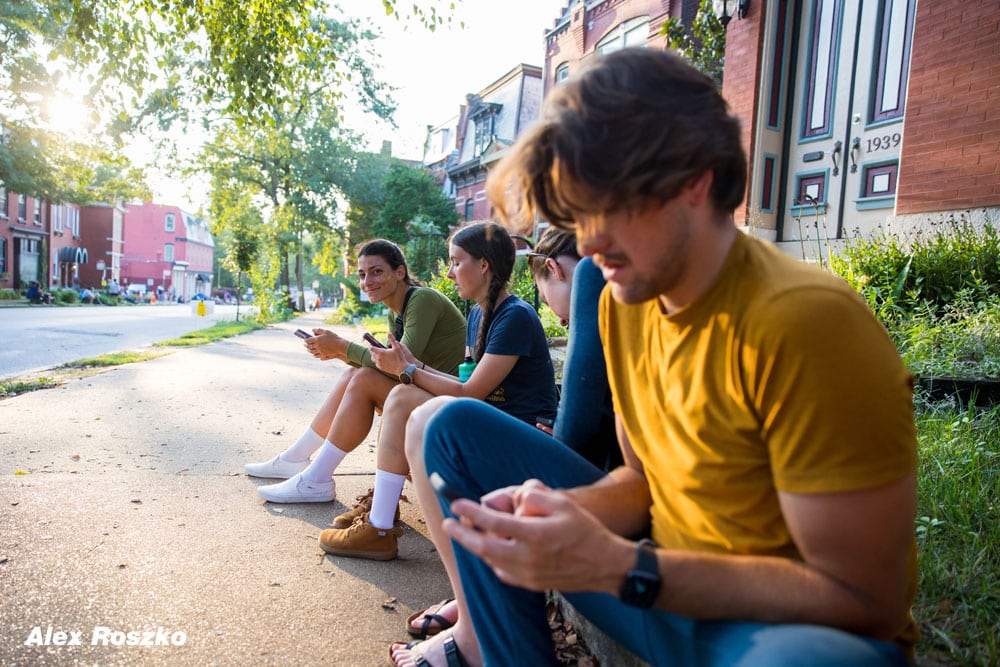 Roxo racing Gateway Cup signals the end of our 2022 team event calendar. At the start of the year we agreed on a racing list and our riders and staff were given a well deserved break with time to recover. A little time away from bike racing will rejuvenate the peloton, providing a reset for 2023. Roxo Racing will be back and 2023 can’t come soon enough.

Through the lens of our talented photographer, Alex Roszko, we want to share our story.


Like PEZ? Why not subscribe to our weekly newsletter to receive updates and reminders on what’s cool in road cycling?