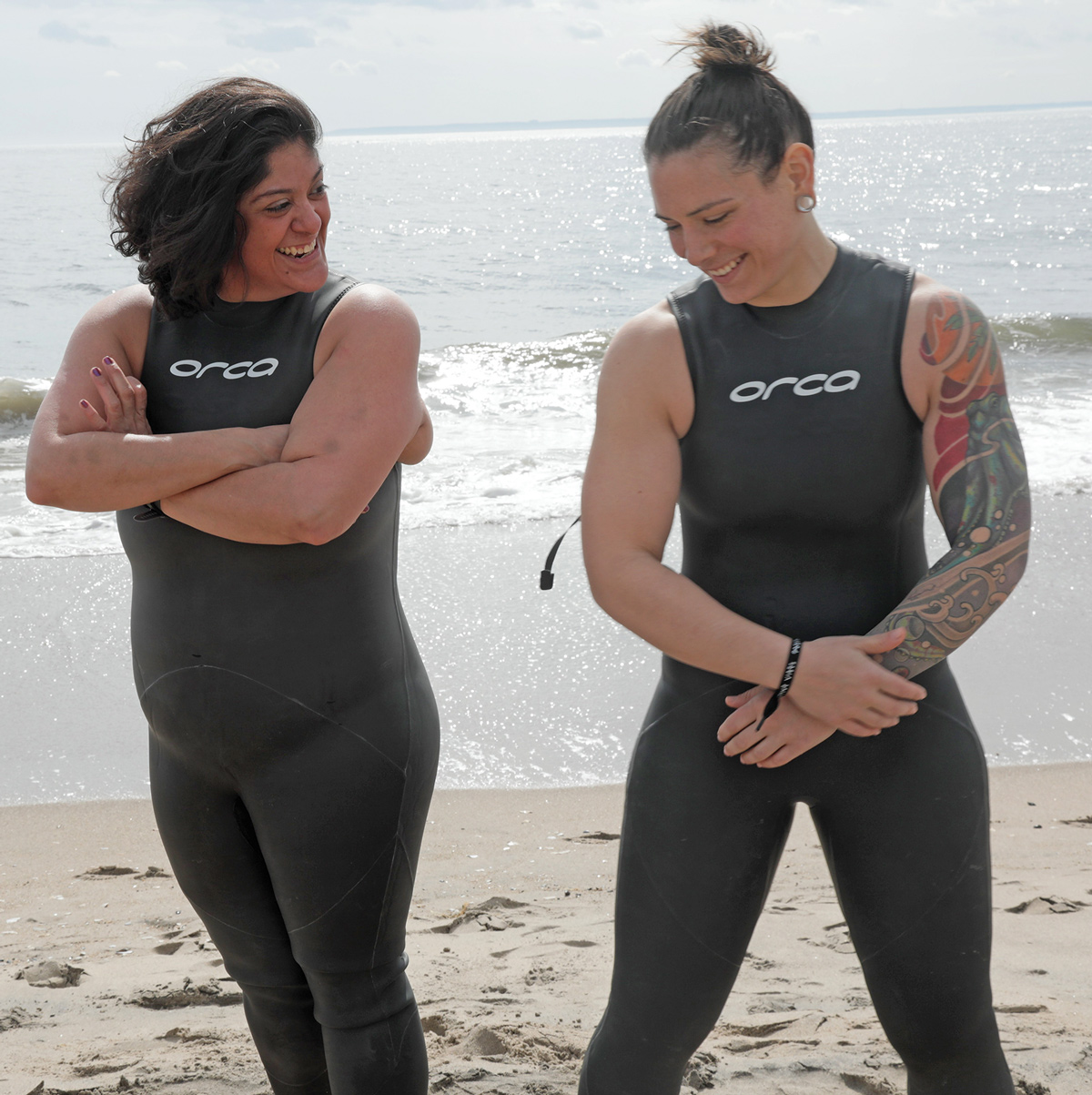 When the world says no, they “say maybe”.

Now, in 2022, stories about the horrors of the 2020 COVID-19 pandemic are mainstream stories – and rightly so. The onset of the global panic caused thousands of people to lose their jobs, loved ones and livelihoods. However, in some circumstances, the forced uprooting of life and the broken cycle of normalcy have brought positive and unexpected life changes. This was the case of queer athletes Kristina Nungaray and Jules Bursee.

In 2020, both women were looking to move to Jersey City. Luckily, the two ended up in apartments two doors down from each other. “We both ended up here by fate,” Nungaray said.

Initially, the two strangers were convinced that the other hated them. And though the two said the occasional hello to each other as they walked their dogs and engaged in small talk while attending the same CrossFit gym with their respective roommates, Bursee and Nungaray kept some distance.

It wasn’t until the women discovered that their daily jobs were ironically close (a few blocks) to each other in New York City that a friendship began to develop.

“We started hanging around the city a bit more,” Nungaray said. “We had coffee in the morning, while [Bursee’s] coffee break, just before going to work. That’s when a mutual interest began to emerge – through these conversations and getting to know each other a lot more.

The first commonality the two discovered was both their passion for cooking for others and preparing meals, especially to feed those in need.

Unknowingly, the two women regularly donated to people in need on their way home from work in town. In fact, they had their own group of “regulars” that they bonded with on their daily commute.

“There was a guy at a train station that was kind of like my ‘Five Dollar Friday,'” Bursee said. “I gave him five bucks every Friday, and he was always there.”

She continued, “Then one day we were commuting home together, and it wasn’t like tit for tat, but we both took our own little trips as we walked, and it also had its own people. ”

The realization of this common generosity seemed rare for both.

“I would say a lot of times in our friendship there’s been this kind of catharsis, but that light bulb moment was the first time he [was] like, ‘no one else has ever done this before in my circle,’ Nungaray said. “[Bursee] is the first person I meet who looks a bit like me.

This passion was the starting point of their friendship. At a time when many restaurants were closed due to COVID-19, the two began cooking meals together each week for themselves, their housemates and their athlete friends. Soon, the new friends found themselves cooking for more and more people each week.

“The one new person became another person, and another person, and all of a sudden those people were hitting their nutritional goals,” Nungaray said. “I said [Bursee] on one of our morning coffees, “man, I always wanted to have a meal prep business where if someone bought you food, someone else in need could get a meal. “

Not even a full day had passed before Bursee accepted the idea.

“I was sold,” she said. “I sent him this long novel of a text message, just saying, ‘I know you mentioned it in passing, but I just want you to know, I heard you and I’m ready. I’m ready to do it now.

From that moment, it was takeoff. The couple started Say Maybe, which was originally a meal prep business aimed at building a community around the movement while simultaneously feeding people in food desert neighborhoods.

For six months, the couple cooked meals for a group of dedicated members, easily cooking over 100 meals a week. And for every meal the duo prepared and sold, an equal meal was distributed directly to someone in need.

However, after six months, Say Maybe ran into some hurdles. Unfortunately for the duo, New Jersey has strict laws on food donations and providing meals to those in need. These unforeseen obstacles prevented Say Maybe from moving forward with their initiative for some time.

“It’s not as easy to give to people as you might think,” Nungaray said. “We had to put the brakes on so we could integrate him into everything he was meant to be.”

Although Team Say Maybe’s food distribution initiative stalled, the duo persisted with other common goals. Both constantly engulfed in the world of athletics, Nungaray and Bursee sought to outdo each other physically.

“I was trying to be more competitive in the world of CrossFit,” Bursee said. “And then I found out that once you get to a certain level there’s swimming involved – like competition, real swimming – and I couldn’t swim.”

What may seem like a major conflict for the average athlete was actually the driving force behind Bursee learning a new skill. Luckily for her, her new close friend and coffeehouse friend, Nungaray, is a competitive synchronized swimmer and the perfect teacher to help her achieve her CrossFit goals.

“I told him, ‘If you want to do this, you have to let me coach you, because I have to make sure you’re not going to die,'” Nungaray said.

Bursee and Nungaray did a swimming lesson together. It was in a smaller, medium sized pool, but nonetheless it turned out fine.

“I swam about 10 feet wide and back a few times, and I felt great,” Bursee said. “And the next day at the cafe, I was like, ‘So you want to do a triathlon now that I can swim?'”

The ambitious question came as a shock to Nungaray. However, the equally enthusiastic athlete did not rule it out. There was just one more problem.

“To be honest, I can’t ride a bike,” Nungaray said, “but I’ve always wanted to do a triathlon.”

On a metaphorical runner’s high, enthusiastic athletes found a beginner triathlon and began training together. For two full months, the pair motivated each other to learn new skills and improve their running endurance. Just like that, the duo completed their first triathlon.

“We had a blast,” Nungaray said. “I was hooked from that moment…Especially at that time in my life, there was nobody crazy enough or passionate enough to do something like that.”

She continued, “It was like taking a cold shower. It was like a really good wake up call, and it gave a whole lot of things a new twist in a very optimistic way.

The ambition between these two queer athletes has only grown since then. This year the duo have taken on the daring task of competing in over 21 different endurance events spanning marathons, half marathons, track races, road races, open water races, triathlons, swimming competitions and ultra-races. Locations for these events span everywhere from Huston, Texas to Noosa, Australia.

Through these races, the duo makes it their mission to highlight LGBTQ representation in endurance racing, and to take up space while creating space for others. Nungaray and Bursee want to inspire other LGBTQ people to immerse themselves in spaces and challenge themselves by doing difficult things they may not feel welcome for.

“Through running, and really, really putting that LGBTQ visibility in endurance racing on people’s faces — because I’m not saying there aren’t those types of athletes, but it’s not is not necessarily something that’s celebrated, and it’s not something that’s in front,” Nungaray said, “the point is to create space, so other people can start taking it and help them feel like they belong, even in spaces they feel are not for them.

Using endurance racing as a platform, the race team is also spending this year actively partnering with LGBTQ nonprofits to raise awareness and funds for organizations that foster community and lend resources and support services to the community as a whole. Recently, the team raised $835 for the Montrose Center, a non-profit organization dedicated to providing help, hope, and second chances to LGBTQ youth in Houston who are homeless.

While LGBTQ representation in endurance racing is a priority for Team Say Maybe, it’s not their only initiative. Knowing that not all LGBTQ people are necessarily competitive athletes, the duo also developed and recently launched a queer running club called The Queer Collective. Designed for runners of all skill levels and paces, The Queer Collective meets every Tuesday at the Grove St. PATH plaza at 6:30 p.m. in Jersey City.

“When the pandemic hit and everyone was stuck at home or stuck in their local places, and with the more people I started talking to, it became very, very clear how people queer people needed another outlet to meet in safe spaces, see friendly faces, and build their own found family or community, whatever that was,” Nungaray said. “And the movement was always a vehicle that we were going to use to do that.”

In July, the duo also launched a free training program for new and hopeful triathletes. All are invited to join the duo and learn training tips for a Fall Sprint Triathlon that will be run together. The same athletes are also welcome (but not required) to join a race team that Team Say Maybe is building to compete in the first Ragnar Race, Ragnar Train New Jersey, from September 30 to October 1 this year.

All these combined and ambitious initiatives stem from a real common passion in Nungaray and Bursee: human kindness.

“Kindness shouldn’t be questioned so much,” Bursee said. “Kindness is a human right that people shouldn’t feel so privileged to receive.”

Together, the Say Maybe team hopes to one day open a community center in Jersey City, complete with open fridges, a full pantry, and fitness and wellness classes. They hope to build a network of community supporters strong enough to provide care for all needs at all levels.

“I strongly believe that resilience starts at the community level,” Nungaray said.