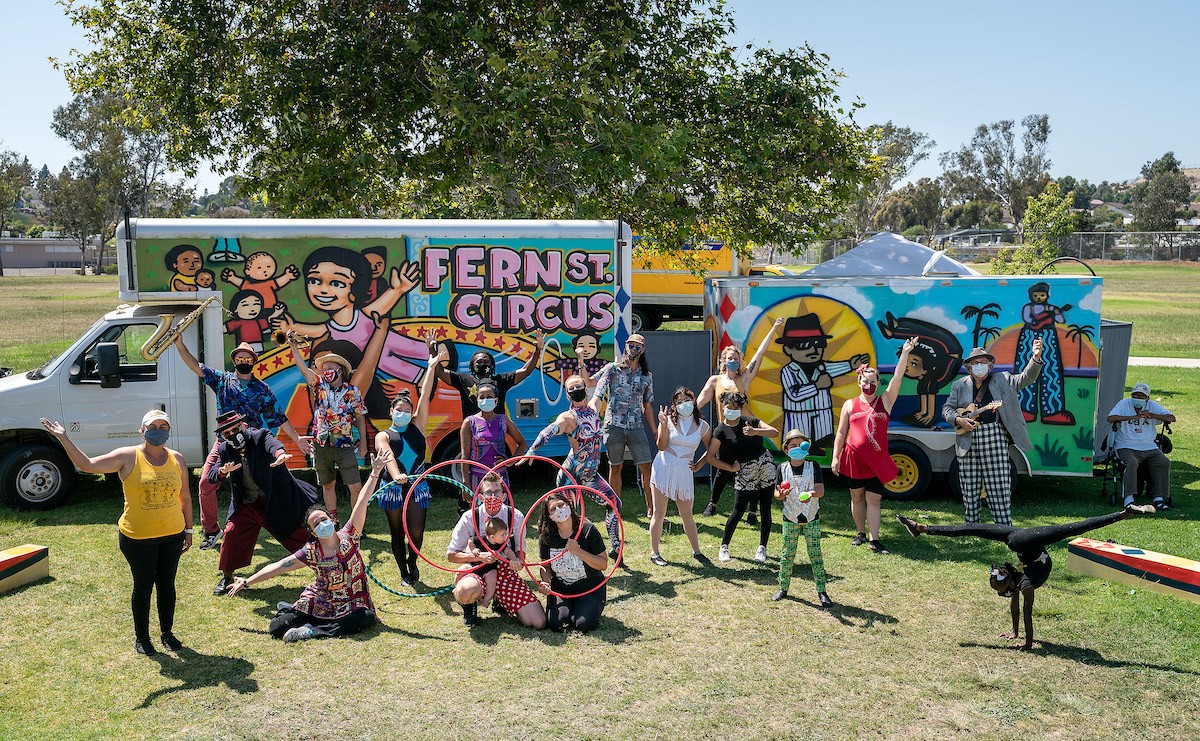 The City Heights neighborhood of San Diego is known for its incredibly diverse community, including Latino, Vietnamese, Somali, Cambodian, and Lao residents. In addition to the many murals and public art exhibits that reflect this diversity, there is another unexpected group of artists who call City Heights home: the Fern Street Circusa project of the non-profit organization Fern Street Community Arts.

The Fern Street Circus has two main broadcast points. They run a thriving after-school circus program and they perform circus, variety and musical acts virtually, at their headquarters and in area public parks. Beyond entertainment, the circus connects participants to essential resources such as housing, transportation and social services.

“I’m interested in theater that touches people where they live. What I love about circus is that it’s not all about language,” says Highkin. “We are a border town. We have a bilingual ringmaster, Memo Mendez, who is really funny and straight out of street theater (both in Colombia and California). … We use the best that the circus can bring and we speak to people in their own language, especially when we play in Spanish-speaking areas.

Fern Street is part of a social circus movement use circus arts as a vehicle for social justice and community development. They rarely charge for the public community performances, in part because they are based in the poorest part of town with a large refugee population. They have also partnered with the county to Census awareness and held health fairs during performances.

The issues community members face come up regularly as themes in their performances. A few years ago, they put together a show about a clown who broke a weird bone but couldn’t afford to get it fixed without health care, social security, or a credit card. COVID has also become a theme, especially through socially distanced performances in drive-thru food distribution lines.

“Right now, since the pandemic, we have a group of artists who are starting out in wetsuits. And one of our clowns comes out with a giant needle and taps them, then they take off their jumpsuits to reveal colorful costumes,” says Highkin.

Fern Street Hires skilled circus performers from around the world, including acrobatic coach Idrissa Bangoura from Conakry, Guinea, whose 9-year-old daughter Adama play with him—both to give free tuition to City Heights students. Groups of students can then perform alongside adults.

“It’s a great way for them to feel more comfortable and part of the workforce,” says Highkin. “We have raised students who have been with us for two and a half years to be featured in our show – two tight-rope sisters and a young woman from Peru who is an outstanding contortionist dancer.”

Youth programs can change the lives of children and parents. One of these parents, Marcela Mercado, came across the circus by chance.

“I’m a mother and I’ve lived in City Heights for 30 years,” she says. “On a walk in 2017, we were all a little anxious looking for activities for the kids. I was holding my then 3-year-old son’s hand and went to Mid-City Gym and I noticed people coming and going.

Suddenly the doors opened and something magical happened inside. “Children were laughing, playing and exercising, doing different circus activities with coaches and having a good time with kids in the community,” she says.

Mercado signed his three children. “When I say my kids are in a circus, people say, ‘circus, what is circus?’ There are many people who still don’t know what circus programs do, but the program has helped my family.

She joined the board two years ago and was hired as a full-time executive director in 2021. Currently, the circus serves approximately 30-35 children through their after-school program Monday through Friday. Children learn juggling, acrobatics, stretched wireride a bike and clown around.

Highkin has big dreams for the future of Fern Street. They are on a temporary lot that the City Heights Community Development Corporation (City Heights CDC) will later turn into affordable housing, but hopes to have a community circus center that teaches music, dance and drama and can be both a performance space and a community resource. He would also like to expand their touring gear so they can perform on the West Coast. Through it all, he wants to make sure they pay artists.

Currently, Highkin says they use multiple sources of funding, from philanthropy to local grants or loans from organizations like City Heights CDC. They were also able to obtain a PPP loan through the CDFI Mutual aid fundwhich allowed them to hire teaching artists who were unemployed during COVID.

Highkin also intends to stay close to his original vision of inspiring social justice through art, which drew on the studies of Bertoldt Brecht, whose East Berlin theater he studied, the Berliner Ensemble. . Instead of promoting escapism regarding Nazi Germany, Brecht depicts reality, but with Verfremdungseffekt, taking the audience away enough to make people think.

“He was very political about overcoming social and economic injustice,” says Highkin. “He wanted people to think. We are working very hard to keep it. We really try to have an impact on the people in our neighborhoods. I think we can do it.

This story is part of our series, CDFI Futures, which explores the community development finance industry through the lens of equity, public policy and inclusive community development. The series is generously supported by Partners for the Common Good. Sign up for PCG’s CapNexus newsletter at capnexus.org.

Hadassah Patterson has been writing for media outlets for more than a decade, contributing seven years to local news online and with 15 years of business writing experience. She currently covers politics, business, social justice, culture, food and wellness.