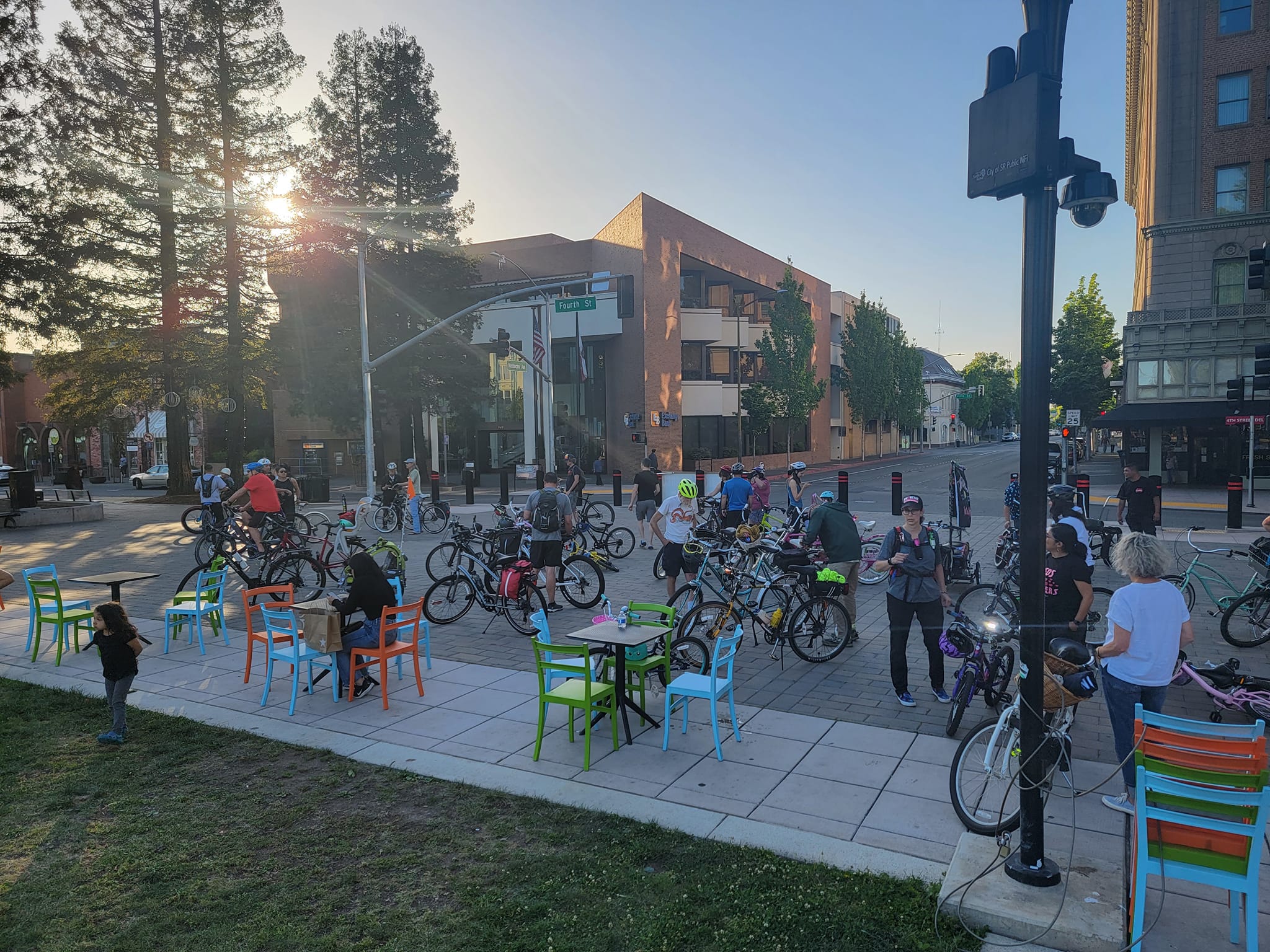 Every Tuesday around 5:45 p.m., cyclists of all kinds congregate at Humboldt Park in Santa Rosa.

Half an hour later, the group begins a slow and winding ride around the city, passing through the McDonald district to the courthouse square, finally arriving at Sebastopol Avenue to share a common meal in outdoor Mitote Food Park taco trucks. On the way back, participants can stop at Yogurt Farms on Mendocino Avenue for a frozen dessert.

Santa Rosa resident Juan Chavez started the weekly Taco Tuesday ride last spring with friends including Chad Hunt as a way to get out of the house following the toughest pandemic restrictions. The two men bonded over their shared passion for recumbent custom bikes – the bicycle equivalent of low-rider cars, these bikes sit lower to the ground and often feature fancy paint jobs, rims and accessories like cup holders.

“I’ve been cycling for a long time, but my bike isn’t like your traditional Sonoma County bike, where it’s a mountain bike or a road bike,” Chavez said. “I fell into the world of the custom stretch bike – as I call it, ‘the life of the bike’ – and just ran around with it and created bike monstrosities. [ever since].”

When a rider doesn’t have a bike or just wants to try out a custom bike, Hunt offers them one from his garage’s “lending library.”

Despite the organizers’ roots in custom bikes, all types of riders and bikes are welcome on the Tuesday rides.

At first, the turnout was around 25 per ride. After the event was covered in the Press Democrat last summer, attendance increased to about 50-60 people per ride. Then, on May 31, the Santa Rosa event won in the attendance category at the first “Taco Tuesday Showdown”, competing with similar events in Oceanside and Riverside.

“Normally we have one or two trucks [at the Mitote Food Park]depending on the size of the crowd, but I said [them] we are going to have 120 to 140 runners. It was my guess. When I saw over 240 people show up, I was floored,” Chavez said.

Indeed, the turnout shattered the group’s previous attendance record of 87 in a single race last summer. A Facebook group for the ride now has more than 830 members, 100 of whom joined last week.

With increased attention, warmer weather and local schools out for the summer, Hunt, the group’s co-founder, expects “over 100 runners on average throughout the summer.”

Amy Loukonen, a longtime cycling advocate and member of the Sonoma County Bicycle and Pedestrian Advisory Committee, has helped support the band behind the scenes for the past year. She first attended a Taco Tuesday last summer and immediately found the inclusiveness and accessibility of the events appealing.

“It’s a sneaky exercise. You’re having such a good time that you don’t feel like you’re exercising. The route was chosen specifically to give a great tour of Santa Rosa while [using] roads that have less vehicle traffic,” Loukonen said. “We have a wide range of ages who ride with us, and that’s part of that diversity. Diversity of bicycles, diversity of people, origins, ages and economic status. The diversity is there. »

Cyclists aren’t the only ones enjoying the event. During the winter months, the dark nights provided an excuse for participants to decorate their rides with colorful light displays, drawing even more attention from people watching the group parade. Some residents who live along the road have even made watching the parade part of their weekly plans.

“We have a group of older people who have literally put up lawn chairs and are waiting for us because they know we’re passing by,” Chavez said.

Unsurprisingly, the group has also caught the attention of local cycling advocates. On Saturday, Chavez received the “Bike Champion of the Year” award from the Sonoma County Bicycle Coalition.

“Juan has inspired hundreds of people across Sonoma County to come together on bikes and build a joyful and diverse community. His unwavering dedication, willingness to support the creative endeavors of others, and optimistic outlook for the future are just a few of the reasons Sonoma County Bike Coalition chose to honor Juan Chavez as Bike Champion of the Year,” the Coalition said in a aannouncement of honour.

Chavez is grateful for the overwhelming support from riders and fans.

“I just want to say thank you to everyone for accepting us and allowing us to walk through their community and be a little loud but still respectful. You know, just having a good time,” he said.

In his acceptance speech at the Bicycle Coalition dinner, Chavez said the weekly ride “is the best time you can spend on a Tuesday night in Sonoma County.”

After experiencing the endearing combination of camaraderie, exercise and good food that Tuesday night rides provide, it’s hard to argue with him.

The Taco Tuesday Bike Ride takes place every Tuesday at Humboldt Park, 1172 Humboldt St., Santa Rosa, at 5:45 p.m. The event is only canceled in the event of rain. You can find more information in the “Santa Rosa Taco Tuesday Ride“Facebook group.