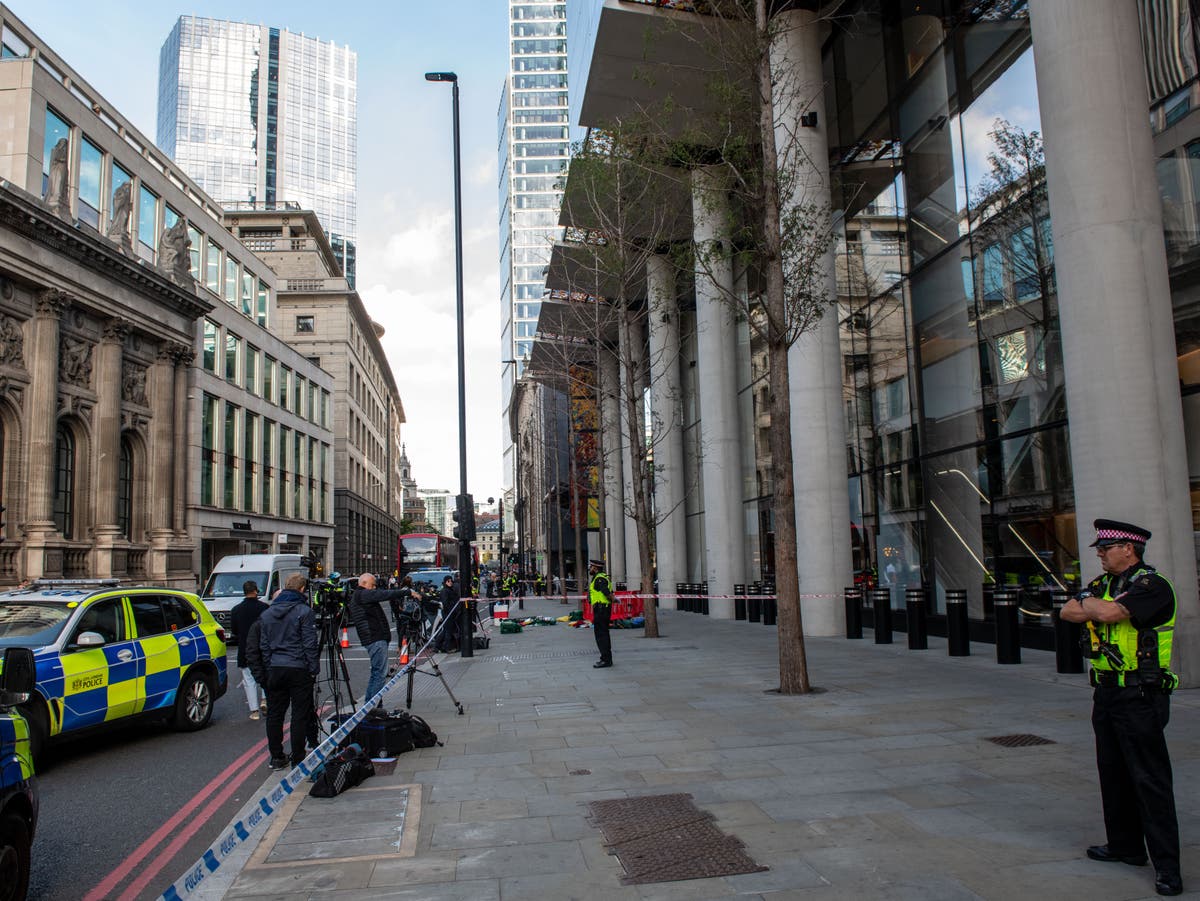 Three people were stabbed as members of the public tried to intervene in a phone theft in central London, witnesses said.

The incident began when a mob attacked a pedestrian in Bishopsgate near Liverpool Street station on Thursday morning, according to passers-by.

Witnesses reportedly saw men on e-bikes attempting to steal a phone, with members of the public rushing to help the victim.

It is believed that the suspects began to attack those who tried to intervene.

Were you touched by this story? Contact [email protected]

Emergency services rushed to the scene in the City of London’s financial district following reports of a stabbing shortly before 10am.

Three people were taken to hospital but did not have life-threatening injuries, police said.

Witnesses described a fight that broke out outside the 22 Bishopsgate skyscraper on Thursday morning.

A passerby, who did not want to be named, said he saw two or three young people on bicycles following a well-dressed middle-aged man before one of them grabbed him.

“Things escalated so quickly. Pedestrians got involved and they were trying to help the middle-aged man. I heard a lot of shouting and shouting,” they said.

“The next minute a man on a white moped saw what happened and jumped up and got involved.

“There was a fight. Out of nowhere, the guy on the moped was stabbed. The middle-aged man was already on the ground at the time after being stabbed and another pedestrian was also injured, his head was injured.

The eyewitness said the teenagers “just took off” after the incident near busy Liverpool Street station.

The knife wore a fleece mask, they added.

Sayeed Dukanwala, owner of a nearby newsagent, said he saw people running past his store shouting “oi oi oi” on Thursday morning.

“After a few minutes, I saw a fight break out over there [at the scene] and people run away. Then people came in and told me there had been a stab wound,” he said. “They said there was a man and a woman on the ground and there was blood.”

Mr Dukanwala said he felt “frightened and unsafe” when he heard what happened next to his shop.

A cordon remained in place outside the commercial skyscraper for hours after the stabbing, with medical kits strewn on the floor inside.

Blood could also be seen on the sidewalk.

A construction worker tells The sun he saw a teenager “fighting an older man” during Thursday’s incident. “It looked like he was trying to pull his hand to try to get something like his phone,” they said.

“Another teenager then pulled out this huge 10-inch knife and just started stabbing,” the witness told the newspaper.

“People had stopped to try to help. A guy stopped his moped wearing a red jumper, he looked like he had been stabbed and was clutching his stomach screaming. Another man was lying on the ground and bleeding badly from his head.

The construction worker reportedly added, “It was crazy. It escalated so quickly, and then they left to escape on their bikes.

Chief Superintendent Steve Heatley of the City of London Police said the force received reports of three stab wounds and a person being pushed to the ground shortly after 9.45am on Thursday.

“Three victims were taken by the London Ambulance Service to a nearby hospital for treatment; they have no life-threatening injuries,” he said.

“Two suspects are wanted in connection with the ongoing investigation related to an attempted phone theft and are not being treated as terrorism related.

“Stopping phone thefts and bringing the perpetrators to justice is a priority for the City of London Police. Phone calls are down, due to targeted efforts, including working with colleagues from the Metropolitan Police Service last week to make several arrests.

A spokesperson for 22 Bishopsgate said: ‘We are aware of a distressing incident which occurred this morning in Bishopsgate, close to our building, and our security team have provided police and emergency services with emergency all necessary support while they were on site.

“We immediately carried out a dynamic risk assessment which determined that there was no direct threat to the building and therefore did not lock the building or prevent access to the entrances.”